Peter Costantini is a Seattle-based analyst who has covered Latin America for the past three decades. 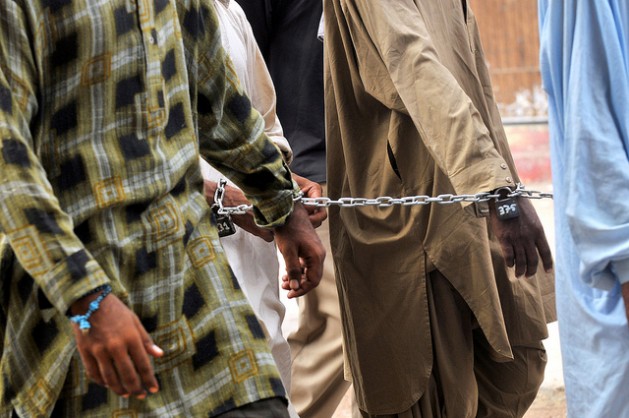 The Third Geneva Convention and the UN Covenant Against Torture do not exempt tortures that somebody believes to be “effective”. Credit: Fahim Siddiqi/IPS

SEATTLE, Washington, Feb 7 2015 (IPS) - “Enhanced interrogation”: the George W. Bush administration bureaucrats who coined the term had perfect pitch. The apparatchiks of Kafka’s Castle would have admired the grayness of the euphemism. But while it sounds like some new kind of focus group, it turns out it was just anodyne branding for good old-fashioned torture.

Unfortunately, the debate around it unleashed by the Senate Select Committee on Intelligence report has largely missed the point.

If the leaders of the richest and most powerful empire in history can claim that defending it requires torturing prisoners, what other government or non-state actor will hesitate to make the same claim?

Certainly, the report did provide overwhelming evidence that torture did not produce useful intelligence.  The CIA had concluded previously that torture is “ineffective”, “counterproductive”, and “will probably result in false answers”.

An FBI agent wrote that one prisoner had cooperated and provided “important actionable intelligence” months before being tortured.  Some CIA agents and soldiers reportedly questioned the legality of the policies and resisted carrying them out.

A Bush Justice Department lawyer acknowledged: “It is difficult to quantify with confidence and precision the effectiveness of the program.”  In any case, it is inherently impossible to know that any intelligence purportedly extracted by torture could not have been elicited by legal interrogation.

Fundamentally, though, whether torture “works” or not is immaterial.

The Third Geneva Convention and the U.N. Covenant Against Torture do not exempt tortures that somebody believes to be “effective”.  The codes are based on the hard-headed calculation that by agreeing not to torture non-combatants, nations can reduce the probability of their own non-combatants being tortured.

Post-WWII trials imprisoned and executed German and Japanese officials for war crimes including torture.  Nuremberg and Tokyo established the indelible principle that acting as responsible government officials, or following the orders of one, is not a defense against accusations of war crimes.

Granted, these norms have been observed as much in the breach as in practice.  And on the blood-soaked canvas of the past century, the damages of torture pale beside the scope of suffering inflicted by the “legal” savageries of war.  Yet if the leaders of the richest and most powerful empire in history can claim that defending it requires torturing prisoners, what other government or non-state actor will hesitate to make the same claim?

Dick Cheney, former Vice President and current Marketing Director for the Spanish Inquisition, says: “I’d do it again in a minute.”  No one should doubt his sincerity.

But beyond such immediate imperatives, the torture policy meshed seamlessly with a discretionary war premised on lies and optimized for “Shock and Awe”.  This neat ideological package asserted the unchallengeable power of a “Unitary Executive” above constitutional checks and balances, national law and international treaties.

Strategically, the Bush-Cheney project targeted conceptual smart bombs on the very idea of human rights.  The rest of the world got the message, and the damage to US national security has yet to be repaired.

“Enhanced interrogation”, however, has roots reaching back decades into CIA collaboration with dictatorships in Latin America.

Brazil’s National Truth Commission recently concluded that from 1954 through 1996 the US gave some 300 military officers “theoretical and practical classes in torture”.  Current President Dilma Rousseff was one of those tortured by the military, which ruled the largest country in Latin America from 1964 through 1985.

Over the past half-century, the CIA has been implicated in providing similar training to military dictatorships across South and Central America.  The United States also provided military aid and advice to many of them, participated in coups against elected governments, and was complicit in the murder and disappearance of hundreds of thousands, according to investigative journalist Robert Parry.

In Guatemala, for example, the CIA trained and supported a military and intelligence apparatus that exterminated close to 200,000 people over 30 years and committed genocide against Mayan communities, according to an independent Historical Clarification Commission.

The origins of US torture policies go back to early in the Vietnam War. According to the Senate report, “In 1963, the CIA produced the KUBARK Counterintelligence Interrogation Manual, intended as a manual for Cold War Interrogations, which included the ‘principal coercive techniques of interrogation …’”.

In 1983, sections of KUBARK were incorporated into the Human Resource Exploitation Training Manual, “used to provide interrogation training in Latin America in the early 1980s”.

One of the CIA officers who provided these trainings was later “orally admonished for inappropriate use of interrogation techniques.”  But his efforts ultimately proved to be a good career move.  In 2002, the CIA made him chief of interrogations.

Bush’s head of the CIA’s Counterterrorism Center allegedly destroyed videotapes of torture and discouraged field agents from questioning the practices, according to historian Greg Grandin.

In 1992, the Pentagon destroyed most documentation of these training programmes, Parry reported.  The orders came from the office of then Defense Secretary Dick Cheney.

In response to mounting evidence of decades of torture, what would an “indispensable nation” do?

The release of the Senate report was an important precedent. But until perpetrators all the way to the top are brought to justice, our government will rightly be seen as hypocritical when it criticises the human rights violations of others.

Ultimately, the gravity and scope of wrongdoing call for a reincarnation of the 1975 Church Committee, which investigated abuses by intelligence agencies in the wake of Watergate. It should serve as a truth commission exposing the US government’s use of torture, terror and other human rights violations, going back 40 years to where Church left off.

The official U.S. Senate history of the Church Committee cites historian Henry Steele Commager, referring to executive branch officials who seemed to consider themselves above the law: “It is this indifference to constitutional restraints that is perhaps the most threatening of all the evidence that emerges from the findings of the Church Committee.”

Meanwhile, allies have begun digging.  In 2009, Spanish jurist Baltasar Garzón Real opened two investigations of the Bush torture programme, one of which is still pending.  In December, the European Center for Constitutional and Human Rights in Berlin filed complaints accusing several high Bush administration figures of “the war crime of torture” under German and international law.

The odds of seeing Cheney and company in a glass booth may be slim.  But it would be a small victory for humanity if they had to look over their shoulders whenever they travel abroad.

As some of us never seem to learn, genuine national security is about not black ops and drones, but hearts and minds.

As an epitaph for the Bush-Cheney vision, consider Percy Bysshe Shelley’s 1818 poem “Ozymandias”:

I met a traveller from an antique land

Who said: ‘Two vast and trunkless legs of stone

Stand in the desert. Near them, on the sand,

Half sunk, a shattered visage lies, whose frown,

And wrinkled lip, and sneer of cold command,

Tell that its sculptor well those passions read

Which yet survive, stamped on these lifeless things,

The hand that mocked them and the heart that fed:

And on the pedestal these words appear:

‘My name is Ozymandias, king of kings:

Look on my works, ye Mighty, and despair!’

Nothing beside remains. Round the decay

Of that colossal wreck, boundless and bare

The lone and level sands stretch far away.