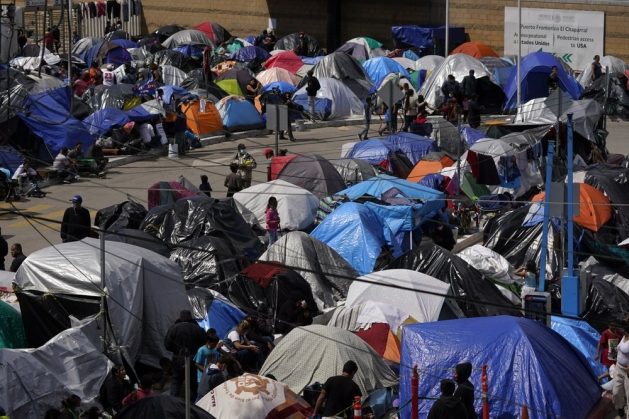 SEATTLE, US, Sep 28 2021 (IPS) - A widely condemned Trump administration program designed to slash legal immigration to the United States, initially terminated by the Joe Biden administration, has been reinstated by court rulings on a Republican lawsuit. Human-rights and immigrant justice advocates have gone on the legal and political offensive against the decision, and are pressing the Biden administration to bypass the court’s roadblock.

The Migrant Protection Protocols, commonly known as Remain in Mexico, make asylum at the United States border more difficult and dangerous to obtain by forcing migrants initially accepted into the process to return to Mexico to await their next asylum hearing.

Human rights and immigrant justice advocates have protested forcefully that Remain in Mexico is a violation of the law and of migrants’ human rights, and must not be reinstated

During the United States presidential campaign, Joe Biden criticized the program as “dangerous” and “inhumane” and said he would end it. After taking office, his administration immediately suspended new enrollments into Remain in Mexico, and on June 1 terminated Trump’s original December 2018 program. So far, Biden has allowed some 13,000 affected immigrants to re-enter the United States to await their hearings, but an estimated 25,000 remain in limbo near the border. Tens of thousands more have apparently dispersed to other parts of Mexico and Central America, or crossed without documentation into the U.S.

In an effort to restore Remain in Mexico, the Republican attorneys general of the states of Texas and Missouri challenged the Biden administration’s repeal of the program in a U.S. District Court in Texas, and on August 13 a Trump-appointed judge ordered it reinstated. The Biden administration appealed unsuccessfully to the Fifth U.S. Circuit Court of Appeals and then to the U.S. Supreme Court, asking them to stay the Texas ruling while the case proceeded. But on August 24 the Supreme Court rejected the request and allowed the original District Court decision to stand until the appeal is decided.

In response, the Department of Homeland Security issued a statement disagreeing with the court decisions and regretting that the Supreme Court declined to issue a stay. “DHS has appealed the district court’s order”, it said, “and will continue to vigorously challenge it. As the appeal process continues, however, DHS will comply with the order in good faith.”

Civil society and Congress push back

Human rights and immigrant justice advocates have protested forcefully that Remain in Mexico is a violation of the law and of migrants’ human rights, and must not be reinstated. An official of the United Nations High Commissioner for Refugees, Gillian Triggs, called Remain in Mexico “a menace to the asylum system and to the compliance of the U.S. with its international obligations.“ She told Alberto Pradilla of the Mexican news site Animal Politico, “All people have a right to seek asylum. The difficulty with MPP is that, in effect, it denies access to a process.”

The original District Court ruling held that the Biden’s government’s memo terminating the program had not considered all relevant factors nor given sufficient justification for cancelling it. In response, immigrant advocates have called on Biden’s policy-makers to quickly redraft the memo with a fuller explanation for the rescission that would pass muster with the courts. “The government must take all steps available to fully end this illegal program,” commented Omar Jadwat, Director of the American Civil Liberties Union’s Immigrants’ Rights Project, “including by re-terminating it with a fuller explanation. What it must not do is use this decision as cover for abandoning its commitment to restore a fair asylum system.”

“It is abundantly clear that the United States cannot safely reinstate MPP and that any attempt to return people seeking safety to harm in Mexico will violate U.S. and international legal obligations to refugees”, argued a letter from over 30 Democratic members of Congress, led by Rep. Veronica Escobar (D-TX16) and Sen. Bob Menendez (D-NJ). “MPP does not represent our values as a country and should be permanently discarded along with the many other unlawful Trump administration policies designed to punish and deter refugees from seeking safety.”

Debate continues within the Biden administration, according to Anita Kumar of Politico, on whether to redraft the memo terminating Remain in Mexico to meet the courts’ objections, or to try to comply with the ruling by implementing “Remain in Mexico Lite”, requiring smaller numbers to wait in Mexico in better living conditions and with more access to attorneys. However, Marielena Hincapié, executive director of the National Immigration Law Center, told Kumar: “One of his campaign promises was to end MPP. He did that. He should stand by that. The answer is not to simply find a gentler, kinder MPP 2.0. That completely flies in the face of his promise.”

Over 70 civil-society groups and coalitions from the U.S., Mexico and Central America took a different tack: they sent a letter (reprinted below) to the Mexican government calling on it to refuse to cooperate with the revived Remain in Mexico program. When Trump originally launched it, the Mexican government said it did not agree with it, but would cooperate for humanitarian reasons. The organizations now urge Mexico to reject U.S. requests to accept returnees, which the Biden administration and the courts appear to recognize would make it impossible to reinstate the program. The letter points out that the Mexican Supreme Court and National Human Rights Commission are currently hearing cases about the legality and human-rights consequences of the program, and warns of the probable harm that would be inflicted on migrants by its reinstatement.

Negotiations are reportedly being conducted between Mexico and the U.S. on issues raised by the program’s provisional reinstatement. So far, the administration of Andrés Manuel López Obrador has been publicly non-committal on how much it is willing to cooperate, invoking national sovereignty to deny any obligation to comply with a U.S. court’s decision, yet not ruling out humanitarian assistance.

What the Trump administration officially called the Migrant Protection Protocols had nothing to do with protecting migrants. On the contrary, the measure put them in mortal danger, sending 72 thousand mainly Central American migrants who had already been accepted as potential candidates for asylum back to await their court hearings in Mexico, often for many months, sometimes for more than a year. As the ACLU’s Jadwat put it: “The whole purpose of the policy was to punish people for seeking asylum by trapping them in miserable and dangerous conditions.” The ACLU and other civil-society groups challenged the program in court, but were unable to overturn it during Trump’s term. They are considering restarting legal action if the Biden administration re-implements the policy.

Some border areas to which migrants have been returned by the program are so dangerous that the U.S. State Department warns travelers of the same threat level as in Syria, Afghanistan, and Yemen. They are dominated by organized crime, often in league with corrupt officials and police, and many thousands of returnees have fallen victim to violent crimes. Returned migrants are frequently forced to live in unsanitary tent camps and overcrowded shelters. Access to U.S. immigration attorneys is severely restricted, and migrants often encounter difficulties entering the U.S. for their hearings. As a result, the percentage of asylum seekers returned to Mexico under the program who eventually receive asylum is reportedly only 1.6 percent of completed cases.

The United Nations and international human rights groups have sharply criticized Remain in Mexico as a violation of the rights to request asylum and to avoid refoulement – forced return to situations of persecution that migrants are trying to escape. The U.N. High Commissioner for Human Rights and former President of Chile, Michelle Bachelet Jeria, said she was “profoundly disturbed” by the Migrant Protection Protocols and related Trump policies that had “drastically reduced protections for migrant families.” Amnesty International warned: “Trump’s efforts to end asylum are an all-out assault on human rights.”

Remain in Mexico was only one among many repressive weapons deployed by Trump’s immigration bureaucracy in its blitzkrieg on asylum. Early in his term, his administration began to restrict and sometimes cut off access for migrants to request asylum at official ports of entry, which is guaranteed by the Refugee Act of 1980 and international treaties. Around the same time, Attorney General Jeff Sessions imposed what he called “Zero Tolerance”, which decreed that all migrants trying to cross between ports of entry would be imprisoned, and that children would be separated from their parents. This also violated those laws and treaties, which protect the right to seek asylum anywhere along a border or within U.S. territory. The forced separation of families was condemned across much of the U.S. political spectrum. Physicians for Human Rights, a U.S. NGO, called it a form of torture and forced disappearance, and the American Association of Pediatrics characterized it as “government-sanctioned child abuse” that could cause “irreparable harm” with “lifelong consequences”.

Buttressing these interlocking virtual walls against seeking asylum, Trump’s cadre erected legal barriers against those already in the asylum process. These included Remain in Mexico and efforts to force Central American or Mexican governments to accept asylum seekers in lieu of granting them asylum in the U.S.

Some of these programs were struck down by courts. But Trump’s immigration Rasputin, Stephen Miller, and fellow operatives continued to launch other salvos against authorized and unauthorized immigration. When the COVID-19 pandemic struck, they took advantage of it to strongarm the Centers for Disease Control and Prevention into issuing an emergency order, known as Title 42, which prohibited nearly all immigration across the southwest border and ordered the rapid expulsion of migrants without a chance to ask for asylum. Although the Trump administration justified the measure as a means of preventing the spread of the pandemic, a loud chorus of public health experts inside and outside of the CDC objected that Title 42 could not be justified for public health reasons, and was yet another effort to exclude legal immigrants seeking asylum.

The incoming Joe Biden administration has eliminated some of Trump’s worst attacks on immigrants. But it is still enforcing Title 42, except for children, and continues to pressure other governments to stop immigration through Mexico.

The scope and brutality of the Trump administration’s policies made clear that its ultimate goal was to eventually end all immigration to the U.S., except perhaps from Norway. It came close to completely eliminating the refugee program. In measures tantamount to ethnic cleansing, it also tried to exclude Muslim, African, and other immigrants and visitors of color. It also imposed measures to make both lawful permanent resident status and naturalization more difficult to achieve and maintain. More than four-fifths of migrants to the U.S. are from Latin America, Asia and Africa, as Trump’s cadre were well aware. Their white sado-nationalism unleashed scapegoating and repression that reeked of racism, xenophobia, and fascism. As Adam Serwer observed in The Atlantic of Trump and his supporters: “The cruelty is the point.”

In the eyes of many observers around the world, the Trump régime came to be viewed as a rogue state that flagrantly denied the human rights of migrants. The Biden administration could take a step towards repairing the damage by refusing to reinstate one of Trump’s most destructive violations.

(Full text of the letter and list of endorsers)