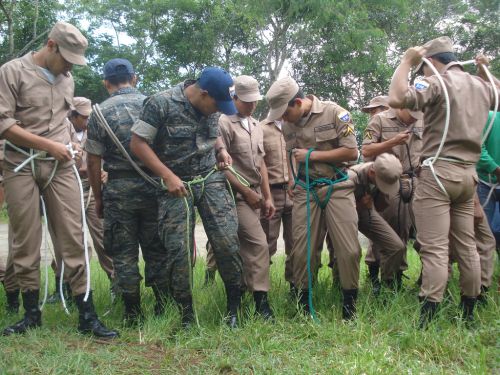 Youngsters participating in military civic service get ready to rappel down a cliff. Credit: Danilo Valladares/IPS

GUATEMALA CITY, Jul 27 2012 (IPS) - “I feel proud to be a part of this change. Malnutrition cannot be wiped out in just two or three years, but this is the beginning and I want to be a part of it,” says Isabela Tzoc, a civic service volunteer involved in a youth programme aimed at fighting extreme poverty in Guatemala.

“I’ve become so caught up in it that tomorrow I’m going to miss classes (at the university) because I have a training session with the group. Out of love for my country and because I made a commitment to Guatemala, I’m going to finish what I’ve started here,” added Tzoc in an interview with IPS.

The 21-year-old education student is one of a group of 157 volunteers who have been participating since April in “Jóvenes centinelas contra la desnutrición” (Young Sentries Against Malnutrition), an initiative sponsored by the National Youth Council.

Guatemala has the highest rate of chronic childhood malnutrition in Latin America. It affects one of every two children under the age of five in the country, according to the United Nations Children’s Fund (UNICEF).

“Young Sentries Against Malnutrition” was created in the framework of the Civic Service Law, in force since 2011, which requires Guatemalans between the ages of 18 and 24 – both male and female – to serve their country for a total of 728 hours. They are able to opt for either military or social service, and are paid 1.10 dollars an hour.

According to the legislation, military service “trains Guatemalans for the armed defence of the homeland, within a doctrine that respects human rights and civic, political and moral values,” in addition to providing first aid and risk management training. Social service, meanwhile, promotes young people’s participation in areas like health, education, the environment and other social assistance-related sectors.

The new law, put into effect by the administration of former social democratic President Álvaro Colom (2008-2012), was welcomed by human rights activists because it regulates military service without making it compulsory – a practice that led to a series of abuses during the 1960-1996 civil war between leftist guerrillas and the armed forces, in which at least 200,000 people were killed or forcibly disappeared.

According to the independent Historical Clarification Commission – the truth commission established after the end of the armed conflict – the Guatemalan army illegally forced thousands of young people, including children under the age of 15, to join its ranks and participate directly in the war.

The commission also concluded that 93 percent of the human rights violations documented during the conflict were committed by government forces and allied paramilitary groups.

Today, however, young people can freely choose between military service and social service.

Tzoc opted for social service, and ended up working in poor communities in Nahualá and Sololá, in southwestern Guatemala.

“We are studying their needs and preparing a report for SESAN (the Secretariat of Food and Nutritional Security). It is an amazing experience to spend time with these families,” said Tzoc, who underwent military civic service training.

“The young people receive basic military training: army rules and regulations, first aid, familiarity with weapons, shooting practice, and a lot of training on natural disasters so that they can provide support in the event of any emergency in their own departments (provinces),” he told IPS.

“No one is forced into military service,” Urízar stressed. “It is an opportunity for citizens to fulfil their civic duty, and the army provides this space for society.”

“This is voluntary, and I think that’s great, because not everyone has the calling for a military career,” said Erick Tatagüin, a civic service participant in the Mariscal Zavala army brigade in Guatemala City.

“It helps people in the event of natural disasters. You learn what to do if there is a landslide or an earthquake, and how to attend to people who are wounded, if they are bleeding or have broken bones,” he told IPS while preparing for cliff scaling practice.

Francisco Montenegro, of the Paz Joven (Young Peace) movement, told IPS that the importance of the new legislation lies in the fact that “it involves young people in the different government efforts aimed at reducing social gaps through strategic action.”
But he is wary of the potential for the authorities to use the new law for political and electoral purposes.

“Government institutions need to ensure transparency in order to guarantee that only young people carrying out their civic service obligations receive the corresponding remuneration, and that it is not tied to any political or partisan objectives,” he stressed.

While the new law has met with considerable public approval, some remain sceptical.

“Because it is overseen by the Ministry of Defence, it is still military in nature, and this prevents young people from providing service with a more democratic and community service-oriented vision,” activist Arturo Chub with the non-governmental organisation Seguridad en Democracia (Security in Democracy) told IPS.

Nevertheless, he acknowledged, the fact that young people are no longer forced into military service does represent an advance in Guatemala, where 54 percent of the country’s 14 million inhabitants live in poverty and 13 percent in extreme poverty, particularly in indigenous communities that lack health and education services, according to the 2011 National Living Conditions Survey.