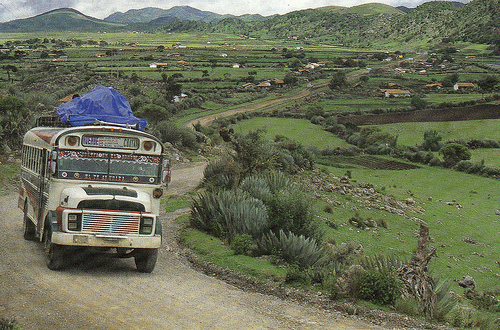 GUATEMALA CITY, Dec 17 2012 (IPS) - An “integral rural development law” to promote access to land, employment and other rights for small farmers is bogged down in the Guatemalan Congress due to opposition from large landowners, who see it as an attempt at land reform.

“The bill contains 10 proposals that would contribute particularly to development for women and indigenous rural communities,” activist Irene Barrientos, of the Committee of Campesino (small farmer) Unity, told IPS.

“The rights to land and clean water, and the promotion of economic, social and labour policies and food security” are addressed in the bill, which was defeated once again on Nov. 29 when it failed to win at least 105 votes in the 158-member single-chamber parliament, as required to pass legislation of “national urgency.”

Campesinos in Guatemala are especially worried, because that day was the last day of ordinary sessions, and Congress will have to hold a special session to debate the bill before year-end, which they fear will be “an uphill struggle,” Barrientos said.

The vote in Congress left a sour taste in the mouth of campesinos, who need land for their family to farm.

“The legislators have mocked the people, because in March the president of Congress and the heads of the parliamentary blocs promised to approve it, but when it came to the crunch it was apparent their votes had been bought by the Chamber of Agriculture,” which is against the bill, she said.

This Central American country of 15 million people has some of the worst social and economic indicators in Latin America. And the indigenous majority living in the country’s rural areas are the most vulnerable.

Fifty-four percent of the population lives in poverty and 13 percent in extreme poverty, according to the 2011 National Survey of Living Conditions, while half of the children under five suffer chronic malnutrition, according to UNICEF, the United Nations Children’s Fund.

Barrientos regretted the position taken by the Chamber of Agriculture, which represents large landowners. She said “the bill itself does not implement land reform measures, or the confiscation of lands…They are really defending their interests in the extractive and monoculture model that hurts small farmers.”

The integral rural development bill promotes policies in 10 areas: economic, agricultural and social, and related to labour, food and nutritional security and sovereignty.

It also creates programmes for production of basic grains and soil conservation for sustainable farming, and gives a boost to the campesino economy and to financial services.

According to Álvaro Caballeros of the Guatemalan Coordinating Committee of NGOs and Cooperatives (CONGCOOP), the bill “would guarantee the formulation of public policies with an emphasis on the campesino family economy,” which has gone downhill as a result of the strong support given to the agroexport model.

“The expansion of monoculture production and extractive industries has been promoted in the last 22 years, and this has been disastrous for many rural families, who have been forced to sell their plots of land, hemmed in on all sides by African palm plantations, or whose water sources have been polluted,” he said.

“The law is important because it responds to significant longstanding demands, such as food sovereignty, sustainable agricultural production, health, housing and employment,” Caballeros said.

“We are committed to the rural population in the matter of the approval of this law, as it is one of the five main pillars of the National Agenda for Change,” said Pérez Molina, who stressed that it is in no way a “land reform” strategy.

The bill is also backed by the United Nations office in Guatemala, which called it a task that has remained pending since the 1996 peace agreement put an end to 36 years of armed conflict between leftwing guerrillas and state security forces, in which 200,000 people – mainly rural indigenous campesinos – were killed and disappeared, primarily by the army and its paramilitary allies.

Approval of the bill is complicated for the time being, said Cynthia Fernández of the Association for Research and Social Studies (ASIES), a local NGO. She described the bill as a stride forward in terms of rural development.

“The model that holds sway at present is extremely prejudicial to state intervention for the benefit of the rural population, because it does not facilitate access to land or credit, and it does not give them any assistance,” she complained.

“We believe the bill itself contains a series of general principles that provide a framework for regulation of rural development, backed up by constitutional provisions,” she said.

But the owners of large landed estates remain fiercely opposed to the bill. Carla Caballeros (no relation) of the Chamber of Agriculture told IPS that, if passed into law, “it would result in increased poverty for rural people, more children suffering from malnutrition, and higher unemployment.”

The bill also “violates the right to private property, the freedom of industry, commerce and labour, and the supremacy of the individual enshrined by the constitution,” she said, adding that it would “create chaos in the country’s institutions.”

The Chamber of Agriculture presented an appeal to prevent Congress from debating the bill. But it was thrown out by the Constitutional Court.