GUATEMALA CITY, Mar 30 2012 (IPS) - “We want land where we can live and grow food to feed ourselves,” said Pedro Ichich, one of several thousand indigenous farmers who marched to the Guatemalan capital to demand solutions to the ageold conflict over land. 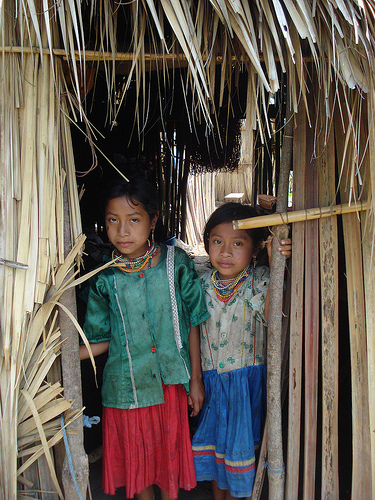 Indigenous people in Guatemala are being displaced from their land. Credit: Danilo Valladares/IPS

The government of right-wing President Otto Pérez Molina met with representatives of the demonstrators this week, and they are now waiting to see what will happen.

Ichich, his wife and five children jointed the protesters on the 214-km march that started out on Mar. 19 from Cobán, in the northern province of Alta Verapaz, and reached Guatemala City eight days later, where they gathered outside the seat of government.

“We want to be where we used to live, where the blood of our compañeros was shed,” said Ichich, whose family was among the campesinos or peasant farmers who were violently evicted by police and soldiers on Mar. 15, 2011 from land in Polochic valley in Alta Verapaz, which sugarcane growers claim as their own.

Three campesinos were killed during the forced eviction of some 3,000 Q’eqchi Maya Indians.

“They left us in the street, with just the clothes on our back,” Ichich told IPS. “The police, the military and the sugar company’s private security destroyed our crops. Since then we haven’t had any work, and we have to ask people to let us spend the night on their property. So we are asking the government to do something.”

Chanting slogans like “water and land can’t be sold” and “No to evictions”, around 5,000 native campesinos from different parts of the country reached the Plaza de la Constitución in the centre of the capital on Tuesday Mar. 27.

The meeting between a delegation of protesters and Pérez Molina stretched from Tuesday evening into the early hours of Wednesday morning.

“The ball is in their court,” Daniel Pascual, a leader of the Comité de Unidad Campesina (CUC – Committee for Campesino Unity), the small farmers’ association that organised the march, told IPS. “The agrarian issue and hunger have become a focus of national debate in these nine days. I don’t think the president can ignore this problem.”

Pascual said the protesters presented Pérez Molina with a list of more than 50 demands with regard to the land problem. But they agreed to put a priority on eight issues.

These urgent questions include the demand for a subsidy equivalent to 39 million dollars to help campesinos pay their debts on land; land for the displaced communities in Polochic valley; a moratorium on mining activity; and the removal of military bases from areas experiencing social conflicts, he said.

“It’s not that we’re giving up on the rest of the issues, it’s just that this is the first set of questions that we are putting a priority on, to facilitate a response by the government,” Pascual said.

Other demands are a halt to evictions from rural property and the cancellation of operating permits for hydroelectric plants.

Pérez Molina and the rural leaders agreed to meet again on Apr. 19 to work out the details of the eight agreements on the top priority issues and review the mechanisms to be put in place to address the rest of the demands.

Before meeting with the president, the campesinos met with legislators who want to pass a law on integral rural development, which organisations of small farmers see as crucial to giving them access to land.

They also met with representatives of the judiciary, to ask judges to take an impartial stance when it comes to issuing eviction orders.

In Guatemala, the gap between the rich minority and the poor majority is one of the largest in the world.

And in the countryside, the growing agribusiness sector is increasingly coming into conflict with indigenous communities, who are fighting for their right to land to grow subsistence crops.

A full 80 percent of farmland is in the hands of just five percent of the country’s 14 million people, while half of the population lives in poverty and 17 percent in extreme poverty, according to United Nations Development Programme (UNDP) figures.

The campesino groups are now waiting for the authorities to live up to their promise to address the situation, although the outlook is not encouraging.

“Experience shows that the post-agreement stage is generally long and exhausting, with the campesino movement making a huge effort and the state failing to comply in the end,” Eugenio Incer, an activist with the Association for the Advance of Social Sciences in Guatemala (AVANCSO), told IPS.

He said that in this situation, there is a clash of two different visions of how to build the country, in social, political and cultural terms.

“On one hand, the communities want the capacity to make decisions on what is happening in their territories, and they want legal frameworks like (International Labour Organisation) Convention 169 on the rights of indigenous people to be enforced,” he said.

“On the other hand is the Guatemalan state’s deeply-rooted vision of not living up to these legal frameworks and facilitating the operation of economic activities that the communities are not necessarily asking for, such as mining, oil drilling, and extensive monoculture,” he said.

Incer said the debate should take place at the national level.

Otherwise, “we will have serious environmental sustainability problems in 50 years, because the level of damage caused to water and forests is severe. We have to see how to achieve a national pact to keep poverty levels and inequality from continuing to grow,” he said.

Other activists expressed doubts as well. Melvin Picón with the Manuel Tot Council of Peoples of Tezulutlán told IPS that the government’s economic policies are “incoherent” and fail to take into account that the country is considered one of the most vulnerable to climate change in the world.

“Despite this, the large-scale exploitation of our natural resources continues, and we are going to suffer the consequences,” he said.

Picón said “the local communities and all of us who are engaged in this struggle are more than willing to take to the streets again and demand justice for the country’s indigenous people.”

According to official statistics, indigenous people comprise close to 40 percent of Guatemala’s population of 14 million, although native organisations put the proportion at over 60 percent.