GUATEMALA CITY, Mar 29 2011 (IPS) - “We have nowhere to plant our corn, we have nothing,” Jorge Chocoj told IPS while waiting with his wife and three children for the police to evict them from the land they farmed in northwestern Guatemala. 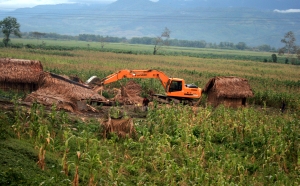 The police didn’t show up that day, Mar. 24. But private security guards of the Chabil Utzaj Sociedad Anónima sugar mill reportedly proceeded to destroy the community’s crops, despite a court injunction blocking the company from taking actions that fall within the jurisdiction of the security forces, says a complaint by the Committee for Campesino Unity (CUC), a small farmers’ association.

The police evictions had started nine days before. In the early hours of the morning on Mar. 15, more than 1,000 police and soldiers showed up in the Polochic Valley in the northern province of Alta Verapaz to evict more than 3,000 Q’eqchi Maya Indians living on land claimed by an agribusiness firm.

The security forces burnt or bulldozed their humble shacks and destroyed their subsistence crops with machetes and tractors. Nearly a dozen farmers were injured in the fray and one farm worker, 30-year-old Juan Antonio Beb Ac, was killed, triggering howls of outrage from human rights groups and other organisations.

The peasant farmers say they have been living and working on the land for 30 years.

The displacement of indigenous farmers in Alta Verapaz highlights the continuing conflict over land in Guatemala, an age-old problem in this Central American country where land ownership is heavily concentrated.

But the centre-left government of Álvaro Colom has only announced further evictions, issuing a statement that all eviction orders would be carried out with immediate effect.

The legality of the agribusiness firm’s claim to the land in the Polochic Valley has been questioned. Since the days of Spanish colonialism, labour tenancy was the practice followed in that area and many others, with successive generations of campesinos (peasants) working and laying claim to the land.

“The legitimacy of property ownership should be questioned – the history under which the concept of private property was created” on land that had been in the hands of Amerindians for generations, researcher Laura Hurtado, with the Guatemalan chapter of ActionAid International, a global anti-poverty agency working in 50 countries, told IPS.

The pressure to expand sugar cane crops in order to produce ethanol has grown since 2005, in the context of a boom in southern Guatemala, which is spreading to other parts of the country.

Guatemala’s leading crop after coffee is sugar cane, which covers 28 percent of the country’s farmland, according to the latest National Agricultural Census, from 2003.

The total area planted with sugar cane grew from 84,000 hectares in 1985 to about 220,000 in 2009, especially along the southern coast, according to the 2010 ActionAid study “The Biofuels Market: Sugarcane and African Palm Production in Guatemala”.

“In the Polochic Valley, agribusiness wants more land to plant cane,” complained CUC leader Carlos Barrientos. “This puts local families in a very difficult situation, because there is now a shortage of basic grains, and to survive they are forced to occupy land,” he told IPS.

ActionAid Guatemala shows in its report how the push for biofuels has driven land concentration, because of pressure on small farmers to sell their land, and “re-concentration” – when plantation owners sell their lands and displace the farm workers living there.

The director of the Institute of Interethnic Studies at the public University of San Carlos, Eduardo Sacayón, said: “We are seeing a government policy that responds to the interests of the dominant landowning class.”

Nearly 80 percent of productive land in Guatemala is in the hands of just five percent of the country’s 14 million people. Meanwhile, half of the population lives in poverty and 17 percent in extreme poverty, according to United Nations figures.

In 1952, then President Jacobo Árbenz (1951-1954) launched an agrarian reform programme, expropriating idle land from large landowners to distribute to dispossessed campesinos. But just two years later he was overthrown by a coup organised and financed by the U.S. Central Intelligence Agency (CIA), and the land that had been redistributed was confiscated.

The dismantling of the short-lived land reform programme became one of the main causes of the 1960-1996 civil war, which left more than 200,000 people – mostly Mayan Indians – dead and disappeared, overwhelmingly at the hands of the armed forces and allied paramilitary militias.

To address the problem, the peace agreement signed in 1996 by the government and the Guatemalan National Revolutionary Unity (URNG) leftist guerrillas included a chapter on social, economic and agrarian commitments. But so far they have led to no tangible results for the country’s impoverished campesinos.

Sacayón said land reform “would be possible if we could achieve a strategic, unified vision among peasants, trade unionists, and even some political parties. But for now only dominant groups are benefiting.”

The eviction of families from the San Pablo Pamoxan farm in Alta Verapaz “obviously has that purpose,” he said, because “it is very clearly being carried out in the context of the campaign for the coming general elections,” due in September.

The government “is trying to show the dominant class that ‘we are with you, and we aren’t interested in resolving the demands of the peasants, especially native farmers,” he said.

The authorities have not offered any alternative to the evicted families. Some of them have set up camps next to the nearest road and are asking for food assistance, while the threat of eviction still hangs over other communities.

ActionAid’s Hurtado said the government’s lack of political will led Congress to stall on a bill on integral rural development, as well as the creation of a land code and agrarian courts to settle land disputes.

“What worries me the most is that a social problem that has been investigated and analysed by the state is being given an exclusively law enforcement-based approach,” she said.

Rural activist Barrientos pointed out that the 1996 peace agreement “talks about democratising the use of land but, on the contrary, the concentration of ownership is growing again, like what is happening in the Polochic Valley.”

He called for dialogue, a halt to the evictions and solidarity with the displaced families.

In a Mar. 23 statement, London-based rights watchdog Amnesty International urged the authorities in Guatemala to put a stop to the forced evictions of indigenous farming communities “which have so far left 2,500 people homeless and have resulted in the death of one man.”

Amnesty’s Guatemala researcher Sebastián Elgueta said “The evictions in Valle del Polochic have so far been carried out without adequate consultation, adequate notice or the provision of adequate alternative housing and they must stop immediately.

“Hundreds of people have lost their homes and livelihoods. Without shelter, food or water they are vulnerable to further abuses and must be protected by the authorities. The 60 or so families that are still at risk of eviction must also be protected.”