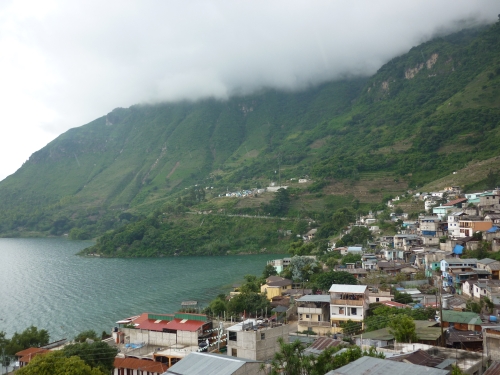 GUATEMALA CITY, Sep 3 2012 (IPS) - In a country as vulnerable to natural disasters as Guatemala, a “state of public calamity” is frequently declared – to the joy of contractors, which find a good opportunity to line their pockets.

Tourists visiting this mountainous Central American country for its natural, archaeological, and ethnic attractions are inevitably surprised to come across a brand-new mountain road destroyed every few kilometres by rockslides and mudslides, and rebuilt in short order.

The destruction is the result of landslides caused by heavy rains on the unstable, bare hillsides. The underlying cause, deforestation, is not addressed. Instead, the road is destroyed and rebuilt, over and over again.

That is because the construction of roads, as well as the distribution of food, form part of the “big disaster business,” activist Guido Calderón, with the non-governmental Civil Convergence for Risk Management in Guatemala (COCIGER), told IPS.

The decree of a state of public calamity allows the government to waive formal tendering processes in order to expedite the emergency procurement of goods and services in case of disasters caused by hurricanes, earthquakes, floods, drought or famine.

But when governments decree “states of calamity, there is often emergency procurement of poor quality, over-priced food and medicine, and contracting of poorly-built bridges and roads,” Nineth Montegegro, a lawmaker with the centre-left Encuentro por Guatemala party, told IPS.

On Feb. 16, right-wing President Otto Pérez Molina, who had taken office a month earlier, declared a state of calamity in the hospital system, in order to increase the flow of funding to the system and solve the chronic shortages of medicine, equipment, and beds.

One of the irregularities was the purchase of more than 149,000 vaccines from a pharmaceutical company for 3.2 million dollars, even though the cost was 68 percent higher than the vaccines offered by the Pan American Health Organisation (PAHO), according to Montenegro.

The comptroller-general’s office reached the conclusion that there was no overpricing because the two offers contained different products. But it did rule that there was an “over-supply” of 22,000 doses, whose shelf-life expires in November, which means they will go to waste.

The minister of health himself, Jorge Villavicencio, has a dubious record. He was appointed minister on May 2, and was suspended 10 days later when it came to light that he had not obtained a “finiquito” – a legal requisite for holding a public position.

In his service record, Villavicencio has 22 notifications of administrative faults while he administered a public hospital, charges from the court of auditors for the irregular transfer of supplies, and two criminal complaints for manslaughter.

But in the space of one week, the office of the public prosecutor and the comptroller-general’s office dismissed all of the charges, and Villavicencio returned to his post.

Profiting from catastrophes was also seen in past administrations.

In February, the comptroller-general’s office filed a lawsuit for the misuse of some 7.7 million dollars by authorities in the ministry of agriculture and food of the government of social democratic president Álvaro Colom (2008-2012).

The funds were to go to the purchase of food aid for thousands of people in rural areas who had lost their homes and crops in 2010 to hurricane Agatha and the eruption of the Pacaya volcano in the south of the country.

The food was purchased, but it went instead to the government’s Bolsa Solidaria programme (today, Bolsa Segura), which distributes food aid to poor families, and was accused by activists and opposition leaders of being used as a patronage-based, corrupt system.

This impoverished Central American nation of 15 million people is one of the most vulnerable countries in the world to earthquakes, volcanic eruptions and climate disasters. Hurricanes Mitch (1998), Stan (2005) and Agatha claimed thousands of lives and caused severe damage to infrastructure and crops.

According to Montenegro, the Colom administration decreed a state of calamity 11 times, and granted more than 800 contracts without public tenders, for a total of more than 650 million dollars.

Over 90 percent of the contracts were granted in a “discretional” manner to rebuild roads and dredge rivers, according to the legislator, who exercises close oversight of public spending.

Colom has denied the accusations. But his own vice president, Rafael
Espada, admitted that declaring a state of calamity could be “a magnificent excuse for corruption.”

But “despite the denunciations, different administrations continue to favour the same companies that have been reported by the comptroller-general’s office, because they are the ones who are financing the campaigns of the political parties,” said Montenegro, who is second vice president of Congress.

The lack of transparency undermines the safety of the works that are contracted out.

On Aug. 15, the Beatriz de la Cueva bridge in the southern province of Santa Rosa collapsed due to poor construction, killing two workers and injuring six others. They were rebuilding the bridge, which had been knocked down by Agatha two years earlier.

The contract for the construction of the new bridge was awarded by the ministry of communications to a private company at a cost of nine million dollars.

“Infrastructure projects have been awarded to companies that probably have the economic, but not the technical, capacity. The construction firms do not have the right personnel to do the work, and in some cases, they don’t have professionals,” Julio Galicia, a member of the association of engineers, told IPS.

The companies sometimes even build poor-quality structures in order to win a new rebuilding contract when they collapse, “because it is an opportunity for a new business deal,” Galicia maintained.

He said the ministry of communications general office of roads has a manual on “general specifications for the construction of roads and bridges” which, if they were followed, “would keep errors to a minimum.”

Delfino Mendoza, with the general office of roads, claimed that “the majority of public institutions that carry out infrastructure projects use the manual,” although he admitted to IPS that the specifications are often ignored in the municipalities and in emergency contracts.

In order to uncover opaque contracts and companies that fund political campaigns, activist Hugo Higueros of the non-governmental Council of Development Institutions told IPS that better oversight is needed, as well as new electoral and party laws.