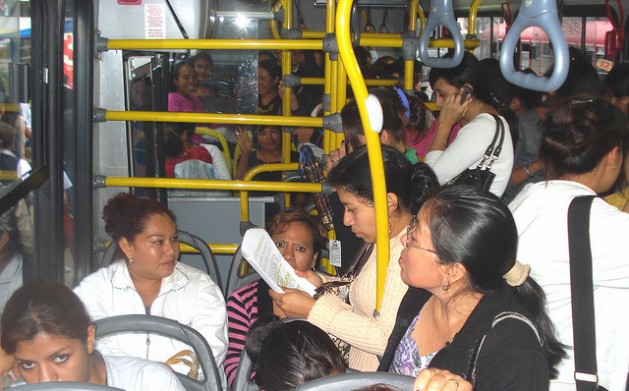 Guatemala, which has the highest number of femicides in Central America, launched a women-only bus service in 2011, to prevent sexual harassment. Credit: Danilo Valladares/IPS

GUATEMALA CITY, Aug 2 2013 (IPS) - Douglas Cuc, a 32-year-old clown, entered the courtroom with the same smile on his face as when he told jokes for coins on the buses in the town of San Miguel Petapa, near the Guatemalan capital. But this time there was no greasepaint on his face, he did not wear his clown’s nose, and he was in handcuffs.

A year and a half earlier he visited his ex-wife, Evelin Pacheco, on the pretext of taking something to their 10-year-old daughter. Neighbours said that on the night of Jan. 25, 2012 they heard screams and then complete silence. The next morning, the young mother’s lifeless body was found at the foot of the stairs.

Cuc was later taken to the scene of the crime, where he tried to persuade the investigators that his ex-wife had fallen down the stairs. But her body showed signs of strangulation and bruising.

Based on the forensic evidence, the history of violence in the relationship and the testimony of neighbours and other witnesses, the public prosecutor’s office charged him with femicide – gender-based murder – in a trial that is being held in a new type of court specialising in violence against women.

Cuc, who by day made bus passengers laugh, by night became a tyrant who repeatedly beat the 26-year-old Pacheco, who worked full-time to support the family.

Eventually she left him, but her ex-husband continued to attack her and make death threats. Pacheco denounced the harassment to the authorities, and on three occasions requested restraining orders, which were granted. But as her mother told the court, weeping and holding her photograph, none of this prevented the tragedy.

Pacheco is one of 708 women who suffered violent deaths in Guatemala in 2012, according to the National Institute of Forensic Sciences (INACIF). During the first half of this year there were 403 deaths, 66 more than in the same period of 2012.

The Central American Integration System (SICA) and the Council of Ministers for Women in Central America (COMMCA) rank Guatemala as the country with the highest number of killings of women in the region.

Justice with a gender perspective

The first hearing in Cuc’s trial was held Jul. 15 at the court for crimes of femicide and other forms of violence against women, in the province of Guatemala, where the country’s capital city is located.

The court, composed of three women judges, is the result of advances in Guatemala which in 2010 became the first country in the world to create specialised courts for femicide and other forms of violence against women.

The “law against femicide and other forms of violence against women”, which created the specialised courts, was approved in 2008 in response to the wave of murders of women in this impoverished country.

It establishes preventive measures, criminal offences and penalties that seek to guarantee women the right to a life free from physical, psychological, sexual, moral or economic violence.

The specialised courts have been set up so far in the provinces of Guatemala, Chiquimula, Quetzaltenango, Huehuetenango and Alta Verapaz, which together account for the majority of violent deaths of women in the country.

The National Centre for Judicial Analysis and Documentation (CENADOJ) told IPS that while in ordinary courts only 7.5 percent of cases of femicide and other forms of violence against women result in conviction and sentencing, in the specialised courts the proportion is already over 30 percent.

The key to their success has been addressing the violence from a gender perspective, analysing each case in the context of inequity, discrimination and misogyny, Ana María Rodríguez, the presiding judge of the court trying Cuc, told IPS.

In the case of Pacheco, for instance, the public prosecutor’s office and Fundación Sobrevivientes (Survivors Foundation), an NGO that represents the young woman’s family, are trying to prove that the actions of her ex-husband sprang from deep-rooted machismo, as he regarded the victim as his property.

With the exception of two male judges in Quetzaltenango, the cases before these specialised courts are heard by women judges who were trained in gender and justice issues at the judicial branch’s School of Judicial Studies.

The courts also employ a psychologist and a social worker, and have daycare facilities to look after children while their mothers testify, so that they are not hindered from participating in trials by the difficulty of finding childcare.

Angélica Valenzuela, the head of the Centre for Research, Training and Support for Women (CICAM), told IPS that the specialised courts have had a positive impact. But she pointed out that they are still not operating all over the country, and the cases that they deal with must be filtered through courts of first instance, which determine the classification of crimes but do not have direct contact with the victims.

Judge Miriam Méndez of the femicide court in Guatemala province said that prosecutors skilled at arguing cases are as important in the prosecution of a crime as having specialist courts for crimes against women.

She said one of the problems is that “testimony remains the chief evidence,” due to the shortcomings in the use of other types of evidence, like forensics.

As Norma Cruz, the head of the Survivors Foundation, told IPS: “The goal is zero deaths and zero impunity,” and there is still a long way to go to make this happen.