GUATEMALA CITY, Jan 31 2012 (IPS) - The relentless wave of femicides in Guatemala, which has one of the highest female murder rates in the world, has prompted actions by the government, civil society groups, and two Nobel Peace laureates to try to put a stop to this brutal violence against women, which has reached horrific proportions. 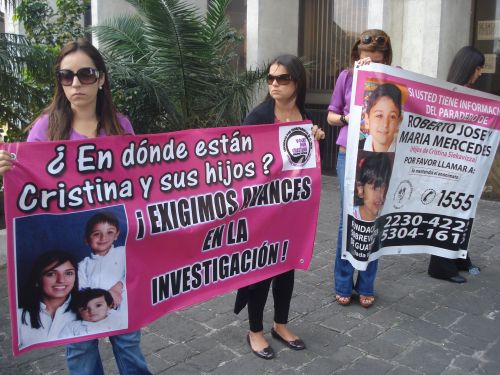 Demonstrators demand that the disappearance of Cristina Siekavizza and her children be investigated. Credit: Danilo Valladares/IPS

According to information from the Presidential Commission against Racism, 705 Guatemalan women lost their lives to gender-related violence in 2011, most of them by gunfire, up from 675 deaths the year before.

This alarming situation has spurred a range of reactions from both civil society and the government.

On Jan. 24, only days after his inauguration as president, right-wing retired general Otto Pérez Molina formed a “task force to combat femicide”, which is the term used in Guatemala to denote gender- motivated killings. Women’s organisations define femicide more precisely as the phenomenon whereby women are murdered because they are women.

This task force, created under the Interior Ministry, the body in charge of domestic security, will be headed by former Prosecutor Mirna Carrera and will focus on intelligence and investigative efforts with the aim of preventing more women from being murdered.

“Femicide is being addressed as a matter of state policy, and a message is being sent out to aggressors that their actions will not be tolerated and that they will be punished,” Mayra Sandoval, a representative of the non-governmental Observatory against Femicide, told IPS.

The activist acknowledged that the Pérez Molina administration – which began its four-year term on Jan. 14 after winning the election on the promise of taking a “firm hand” against crime – “is concerned about violence in general.”

But in the case of the femicide task force, “we need to examine whether its members are qualified to handle a crime scene where the victim is a woman,” she said.

While Sandoval valued the government’s reaction to these crimes, she said “preventive efforts are also needed, otherwise, we’ll just be treating the symptoms without ever getting to the root of the problem.”

This Central American nation of 14 million inhabitants is considered one of the countries with the highest rates of femicides in the world, equalled only by Mexico. From 2000 to 2010, 5,200 women were killed in Guatemala as a result of gender-related violence, according to police figures.

UN Women Director for Latin America Gladys Acosta has called on the international community to take action against the femicide epidemic, not only because of the enormous number of women who are being murdered, but also because of the viciousness of the abuses, which heightens the brutality of this crime.

“Women repeatedly stabbed to death, victims with dismembered bodies… the savagery with which these women are attacked is heinous,” Peruvian expert Acosta told IPS.

This has led the country’s civil society to organise all sorts of demonstrations to demand justice for the victims and the implementation of measures to prevent more deaths.

In one of the most original of these demonstrations, more than 10,000 people scaled Volcán de Agua, an inactive volcano located some 50 kilometres southwest of Guatemala City, to protest against domestic violence, which claims most of its victims among women.

Sporting t-shirts with the march’s “Climb for Life” slogan, participants held hands in one of the longest human chains ever in the world, stretching 11.5 kilometres from the foothills of the dormant volcano to its peak at 3,772 metres high. At the summit, they gathered on a heart shaped banner inside the volcano’s crater to signal the beginning of a “generational change.”

This activity – the first of its kind in Guatemala – was staged by numerous civil society organisations, youth movements, private-sector companies, and foreign embassies accredited in the country.

Dora Amalia Taracena, a member of the non-governmental women’s organisation Convergencia Cívico Política de Mujeres, told IPS that these actions by civil society and the government are signalling that “there is no turning back” in the fight against femicide.

“Civil society organisations, like ours, which address this issue, have been at the forefront of the efforts to put the issue on the public agenda; and our patriarchal culture and the reigning machismo has made this a very difficult battle to wage,” she said.

Taracena recalled that an ongoing campaign in the media and through marches and other public demonstrations organised by relatives of a recent victim, Cristina Siekavizza, “have (also) contributed to raise awareness on the issue of femicide” in Guatemala.

Siekavizza, a business administrator from an affluent family, disappeared mysteriously from her Guatemala City home in July 2011. A month later, a domestic worker employed by her family reported that the victim’s husband, Roberto Barreda, had beaten her to death.

Barreda ran off with their two children and to this day neither him nor the children nor the victim’s body have been found. The case caused great social uproar and revealed that femicide respects no social classes.

The outrage over the persistent violence against women in Guatemala has even moved two Nobel Peace prize winners to speak out.

On Jan. 27, a delegation of the Nobel Women’s Initiative arrived in Guatemala to call for the investigation of femicide crimes in the country and for actions to combat the impunity surrounding these crimes.

The 1992 and 1997 Nobel Peace laureates Rigoberta Menchú (Guatemala) and Jody Williams (United States) travelled to the northwestern department of Sololá to meet with women in the region’s communities and discuss the issue of violence.

The end goal of this mission, which also visited Mexico and Honduras, was to issue recommendations for governments and the international community to contribute to eradicate violence against women in these three countries.

“We think all the actions taken to combat violence against women are very important. And in these last few years we’ve been able to expose (femicide) for what it is: an aberrant and absolutely unacceptable crime,” Alitza Navas, of the non-governmental organisation Tierra Viva, told IPS.

In the last governments “a number of laws favouring women have been passed, including the Family Planning Act and the Law against Femicide (2008), which contribute to eradicate this phenomenon,” the activist said.

Evelyn Curruchiche, of the governmental Ombudsperson for Indigenous Women, told IPS that in order to wipe out the crime of femicide “we need to look at the root factors of this form of violence.”

In her opinion, the state also needs to address the social conditions that affect women, including poverty, education and health.

Also, “this focus on femicides must become a matter of state concern and the government needs to allocate adequate funds to the bodies in charge of addressing the issue,” she concluded.