GUATEMALA CITY, Sep 9 2011 (IPS) - “Women have more opportunities nowadays to participate in the economic, social and political development of the country, but this has still not improved the quality of their lives,” said Laura Reyes, one of the three women candidates for vice president of Guatemala. 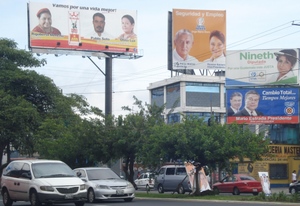 “Many women have done a good job, but others have taken advantage of power to serve their own personal interests,” Reyes, a lawyer belonging to the Cakchiquel Maya indigenous group, told IPS ahead of Sunday’s general elections.

Women’s votes will also be vitally important, because 52 percent of those registered to vote this year are women, whereas in 2003 they were 44 percent, according to official records.

But in spite of women’s increased presence in politics, fundamental changes have still not taken place in women’s way of life, experts told IPS. They concurred that one major shortcoming in Guatemalan democracy is the absence of a gender perspective.

Guatemala’s elections are taking place just as Latin American women’s organisations are debating how to make democracies more gender-inclusive, on the occasion of the United Nations International Day of Democracy, Thursday Sept. 15.

“At age seven, only 54 percent of Maya girls are in school, compared with 71 percent of Maya boys and 75 percent of Ladina (mixed descent) girls,” says a study carried out in Guatemala in 2007 by the U.S.-based Population Council.

According to official figures, 40 percent of Guatemala’s 14 million people are indigenous, although NGOs like Refugees International or the United Nations refugee agency put the proportion much higher.

Seventy-three percent of working women are employed in the informal sector, where labour rights are precarious, according to the Third Report on Labour Markets in Central America and the Dominican Republic, by the International Labour Organisation (ILO) and the Central American Integration System.

This country is also one of the most dangerous for women in the Americas. From 2000 to 2010, according to police records, there were more than 5,200 femicides (gender-related murders of women) in Guatemala.

That is why vice presidential candidate Reyes wants urgent action to support women, including credit and training that are “extremely necessary” for overcoming discrimination against women’s development.

Dora Amalia Taracena, of Convergencia Cívico Política de Mujeres (CONVERGEMUJER), a women’s civil and political coalition, questioned whether Guatemala really has “true democracy,” because “if everyone is to be equal, women’s participation must be raised to the level of men’s.”

Taracena pointed out that there is currently not a single woman cabinet minister, while there are only 19 women lawmakers out of 158. And just one of the 13 Supreme Court justices is a woman.

“We have been making proposals since 1992 for a quota law (for women candidates), and now we are seeking equal numbers of women candidates occupying alternate positions (with men) on the lists for elected posts. But none of these proposals have been adopted because the ‘machista’, patriarchal model of society persists,” she told IPS.

In Central America, only Costa Rica, Honduras and Panama have established a quota system to promote women’s political participation. El Salvador, and Nicaragua where general elections will be held Nov. 6, have no quota laws.

Taracena doubts that the unusually large number of women candidates in these elections will translate into a greater presence of women in positions of power. “Many women are standing for president, vice president and mayor’s offices, but how many are likely to be elected?” she asked.

Furthermore, if a woman is elected there is no guarantee that she will fight for women’s issues, the expert said. “A candidate’s platform or programme is one thing, but what she actually does in office is quite another,” she said.

Taracena emphasised that when women in government positions do achieve positive results, they are treated differently than men, as happened to Sandra Torres, the ex-wife of social democratic President Álvaro Colom.

Torres, who formerly ran the government’s social programmes, including “Mi familia progresa” (My Family Is Making Progress) which provides poor families with a monthly stipend of 39 dollars on condition their children attend school and keep up-to-date with medical check-ups, was harshly criticised by the opposition for allegedly using the plan as a clientelist mechanism and for an alleged lack of transparency.

“I’m sure that a man in her position would have been praised to the skies, since thanks to these programmes many families now have enough to eat,” in a country where half the population lives in poverty, Taracena said.

Torres and Colom divorced in April so that she could stand as a presidential candidate in the elections. But the Supreme Court ruled her ineligible on the grounds that the divorce was a ploy to evade the constitutional ban against family members of a sitting president running for the country’s top job.

Ileana Alamilla of the “Más mujeres mejor política” (More Women, Better Politics) group told IPS: “It’s a good thing for more women to take part in politics, but many of the candidates have not been empowered through involvement in women’s struggles, and others have no real chance of getting elected.”

According to a study by the group, there are 71 women standing for 31 national seats in Congress, but only 18 are placed high enough on candidate lists to actually stand a chance of being elected. A similar situation applies to the provincial constituencies, which elect the remaining lawmakers.

Alamilla stressed that women lawmakers in the present legislature have achieved a great deal. In the last four years Congress has passed 10 laws that address women’s rights, including a law against femicide and one on safe motherhood.

Martha Sicán, the mayor of San Juan Sacatepéquez, a city of over 200,000 people located 31 kilometres from Guatemala City, told IPS that doors to political participation are opening because “people have seen that women work responsibly and honestly.”

“They say women shouldn’t do this; since they do not make the decisions at home, they should not make them in the municipality. But we have worked honestly and transparently and people have noticed that,” she said.

The mayor, who is seeking re-election, created a municipal women’s office and has promoted programmes for training women in productive activities and for addressing violence against women. She gives public financial reports twice a year.

“Perceptions about women have changed a lot, and in two further electoral terms, women’s participation will be more equal,” with real weight for women in Guatemala’s democracy and development, Sicán concluded.