GUATEMALA CITY, Nov 20 2012 (IPS) - “I was surprised at how hard it was to learn more English. I had looked for work in a bank, but I would have earned only half what I make here, and I’d have had to work more hours,” said Carlos de León from his cubicle in a call centre, part of a rapidly growing industry in Guatemala.

De León, a 20-year-old university student, works for one of these call centres, which already employ between 16,000 and 18,000 people in this Central American country and are driving technology development, according to the Guatemalan Exporters Association (AGEXPORT).

Guatemala has 75 call centres, although only 15 of them are involved in Business Process Outsourcing (BPO). They employ 10,000 young people who are bilingual in English and Spanish, and another 6,000 to 8,000 who speak only Spanish, according to AGEXPORT.

Germán López, of AGEXPORT’s call centre and BPO commission, told IPS that the industry injects some eight million dollars per month into the economy in the form of wages, which vary from 562 to 625 dollars a month on average. 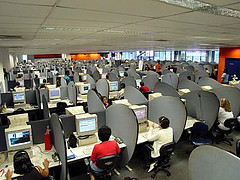 Call centres are a booming activity in Guatemala. Credit: vlima.com/CC BY 2.0

“This goes towards paying for social security, value added tax, supermarket bills, housing, entertainment. And for each of these jobs, four more are created indirectly,” he said.

According to AGEXPORT, call centre revenues amounted to 194.9 million dollars in 2011, 46 percent more than in 2010, while this year a 24 percent increase, to 242 million dollars, is expected.

López said the call centre industry has expanded in Guatemala since 2003, when it began to cater to the U.S. market.

“Our proximity, the competitive prices we can offer the United States, and the compatible time zone are features that make Guatemala an attractive country to the U.S. market,” he said.

Call centres and other forms of BPO in Guatemala offer technical support and problem-solving in different areas, mainly telecommunications, electricity, banking and finance.

The buoyant growth of this industry here, which has attracted capital from India, Canada and the United States, where the largest centres are to be found, is also stimulating the growth of software technologies, web applications and digital development.

“Industries request ever increasing services. As a company, for instance, we have an agreement with another software development firm by which, if they have a client that wants programme development and a contact centre (which manage all client contact through different mediums such as telephone, fax, letter and e-mail), we can offer that,” said López, a manager at the Allied Global call centre.

Furthermore, “as an exporters association, AGEXPORT is looking into the possibility of positioning the country as a provider of technology covering contact centres, software and digital services,” he said.

This impoverished country of 15 million people has made strides towards closing the digital gap. Since 2010, for example, a Technological Campus has operated in the capital city, designed as “a physical space where innovation and technology can find a place to flourish at world-class levels of competitiveness.”

The area, where 100 companies in the information technology sector operate, specialises mainly in the production of special effects for films, video games, and software for mobile phones and the internet.

Meanwhile, a South Korean company, Sollen-Guatemala, is about to commence operations here to make touch screens for iPad and iPhone with a view to distributing them throughout the Americas.

So call centres are just a part of the range of opportunities for technological development and bolstering competitiveness in Guatemala.

José Calderón, of the Language Learning Centre at the public San Carlos University of Guatemala, told IPS they were working on a project with AGEXPORT, the economy ministry, and other universities, to encourage young people to study English.

“The idea is for young people to learn English from the time they enter university, so that within five years we will have between 40,000 and 50,000 young people who know the language,” he said.

As part of this effort, San Carlos University will have to make provisions for its over 150,000 students to study English. “This will allow them to work in a call centre, and to pay for their studies,” Calderón said.

“The call centres are encouraging young people to learn English or perfect it, because they may know the language, but not at the level required for this type of work,” Patricia Mendizábal of the Instituto Guatemalteco Americano, which offers private English courses, told IPS.

The future of the call centre industry looks rosy.

Roberto Mancilla of the mixed agency Invest Guatemala told IPS that this country, “because of its geographical location, similar time zone to the United States, and teaching of English with American pronunciation, has made a substantial leap forward towards competitiveness in this kind of outsourcing.”

However, he admitted that proficiency in English continues to be a challenge.