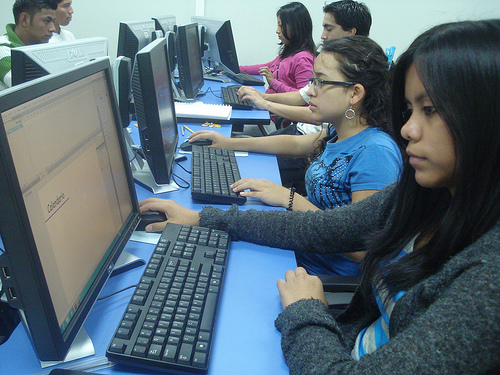 GUATEMALA CITY, Apr 26 2012 (IPS) - “We’re making a three-dimensional educational video game. The idea is to create virtual worlds where children can explore and interact with other people and objects,” said Carlos Villagrán, seated at a computer in the Campus Tecnológico in the Guatemalan capital.

The Tec, as it is better known, was conceived as “a physical space where innovation and technology can find a place to flourish at world-class levels of competitiveness,” according to its web site.

The campus is inspired by Silicon Valley, the technology park in California that is home to hi-tech giants like Adobe Systems, Cisco Systems, Intel, Apple Inc. and Hewlett-Packard.

So far, the Guatemalan campus is thriving. The Tec’s seven-storey building, inaugurated in June 2010, is fully occupied by 100 companies in the information technology (IT) sector, most of whose personnel are young people.

They specialise in producing special effects for movies, video games, and software for mobile telephones and the internet.

The Tec building, located in Cuatro Grados Norte, a cultural district with pedestrian areas, parks and restaurants, also houses the technology institute of the private Universidad del Valle de Guatemala, all of which has generated great anticipation and enthusiasm.

“We were about to throw in the towel because of lack of support, but then we came here and found plenty of people developing their own projects and companies,” Villagrán told IPS.

“There are three dimensional designers and modellers here who are collaborating with us,” he said.

“We have found a place to work, and we are more enthusiastic now,” said this 26-year-old computer science engineer, who wants to see his project “expand all over the world.”

Villagrán participates in the Tec’s “business incubator”, a sort of technological seedbed for entrepreneurial startup companies that is also part of the campus.

The incubator programme “accelerates the process of creation, growth and consolidation of innovative projects and businesses,” María Mercedes Zagui, in charge of business development at the Campus Tecnológico, told IPS.

“We have over 200 enterprise projects that are constantly buzzing around us. These are people who are allied to and interested in us, but we do not have enough space in the building for all of them,” she said.

To cope with the demand, a new 14-storey building is under construction to house more companies, including international firms, while strategies to attract the attention of potential clients abroad are growing.

Zagui said plans are in motion to open a Campus Tec office in the U.S. Silicon Valley technology complex in August.

“That will give us a global presence, because having an address here is not the same as having one in the United States, in the world’s largest business incubator. In addition, there are opportunities for making contacts and securing financial resources there that we do not have here,” she said.

According to the Ibero-American and Inter-American Network of Science and Technology Indicators (RICYT), this impoverished Central American country of 14 million people invests 12 million dollars a year on research and development, equivalent to 0.04 percent of GDP.

Direct government investment in science and technology represents only 27.9 percent of the country’s total investment in this area, while 21.7 percent is contributed by higher education, and the remaining 50.4 percent comes from abroad, the network says.

Meanwhile, the businesses at the Tec continue their struggle to innovate and open up a niche for themselves in the field of technology.

One of them is BigoMo, which does video postproduction and visual effects and is renowned for its work in “The Chronicles of Narnia” film series. Source Tour, meanwhile, has launched a virtual shopfront for tours and tourist activities in Guatemala.

“Being here has been good for our growth. I have met lots of people who work in the same field, but I see them as collaborators, not competitors,” said Mauricio Macal, the head of CG Armada, a multimedia production unit.

But the challenges are great. For one thing, the local market tends to undervalue these technological products, to the point that clients often do not want to pay the real value of their work.

Macal blames this on the fact that many people sell their work at far below market prices.

“There’s a lot of undercutting in the business. Some young people are making logos for 150 quetzals (20 dollars), and they are competing with companies that have fixed overheads, like office rent, and that use brand-name computers and legal software,” he complained to IPS.

In spite of the hurdles, the IT industry seems to be taking off at the Tec, for instance at Milk ‘n Cookies, another Guatemalan company devoted to multimedia production, web platforms and applications for cellphones.

The firm created the Minimundi site, an educational tool on the internet that teaches children about recycling and respect for the environment.

The site is sponsored by Ecoembes, a Spanish nonprofit association that works in the management and processing of recycled materials. Other companies like MTV and Discovery Mobile have also contracted services from the Guatemalan firm.

“The creative artists working here are expert at what they do, and their work is a labour of love. We have no reason to envy designers anywhere else in the world,” Melville said.