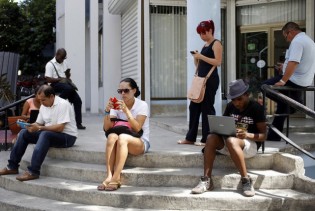 By Marcela Valente
In Latin America, the distribution of laptops in public schools, an effort that has enjoyed success in countries like Argentina, Uruguay and Venezuela, is being studied by the governments of other nations interested in learning from their experience about the challenges that can be expected.

By Danilo Valladares
The lack of adequate management of electronic waste in Guatemala is posing a serious threat to the environment and health, as demand for electronic devices has soared to the point that there are more cell phones than people.

China Cuts Down the Foreign Fun

By Clarissa Sebag-Montefiore
Imported television shows watched by millions will be canned during the country’s prime “golden time” hours, the government announced last week. Last month, popular prime time entertainment programmes were slashed by two-thirds. This was after programmes featuring time travel were all but banned last year.

By Fabíola Ortiz
Community radio stations in Brazil are finding the internet and user-friendly information technologies to be valuable allies for their broadcasts, which focus on citizenship, social equity and human rights.

By Isaiah Esipisu
Francis Mburu used to keep indigenous cattle in Entasopia village in the semi- arid Kajiado region, 160 kilometres southwest of Nairobi. However, increasing temperatures and frequent droughts in Kenya have made this difficult in recent years.

By Marcela Valente
The shop is filled to bursting with buyers. One by one, customers follow a salesperson to one of a row of booths where they are provided with a wealth of information on the mobile phones for sale. But nobody tells them what to do with the old phones they are replacing.

By Ignatius Banda
Collecting the monthly subscriptions for her co-operative has always been a headache for Thelma Nare, 41. This is because Nare lives in Tshitshi, Plumtree in rural Zimbabwe, about 60 kilometres away from the humdrum of the nearest town centre where banks are located.

MIDEAST: Israeli Military Fires Up the Creative Side

By Pierre Klochendler
War brings economic development, we're told at times. Like the cliché or not, in their case, Israelis have become a successful start-up nation by building a powerful start-up military.

By Marcela Valente
Every student and teacher has a laptop with Internet connection in half of the public secondary schools in Argentina, even in remote rural villages or on islands.

By Sujoy Dhar
In a remote Indian village in the Western state of Maharashtra, a fourth-grader named Suraj Balu Zore proudly told IPS that he can now effortlessly operate a laptop computer.
Next Page »
ADVERTISEMENT ADVERTISEMENT