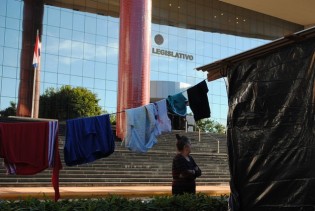 By Natalia Ruiz Diaz
In his first month as president of Paraguay, Federico Franco has thrown open the doors of his country to foreign investments that have raised questions about environmental safety.

Pressure from the Region Could Be Decisive in Paraguay’s Crisis

By Natalia Ruiz Diaz
The international community, and especially the rest of South America, could play a key role in the crisis triggered in Paraguay by the impeachment of President Fernando Lugo and his replacement by Federico Franco, his vice president.

By Natalia Ruiz Diaz
The Paraguayan Congress removed President Fernando Lugo from office Friday in an impeachment trial that lasted only a few hours. The move, formally based on the constitution, triggered an institutional crisis for the fragile democracy in this South American country, and has been rejected by the rest of Latin America.

Tension over Deadly Clash Between Peasants and Police in Paraguay

By Natalia Ruiz Diaz
The death of 16 landless peasants and police officers in a clash in northeastern Paraguay drew attention once again to the long-standing problem of land ownership in the country, where 85 percent of all farmland is owned by just two percent of the population.

By Natalia Ruiz Diaz
"I go out with my cart and collect plastic bottles, cardboard, paper, plastic bags; that is my work," said Laura Cardozo, proud member of a recycling group that works the Paraguayan capital's streets.

By Natalia Ruiz Diaz
Paraguay's economy is currently growing at the fastest rate in Latin America, due to by growing demand and high prices for agricultural products, especially soy, which is driving the expansion. But the question is whether the benefits of the boom will trickle down to the poor majority.

By Natalia Ruiz Diaz
Just two months before the austral summer season begins, Lake Ypacaraí, centrepiece of Paraguay's campaign to promote tourism, has become the centre of attention for its polluted waters.

By Natalia Ruiz Diaz
Increasingly murky waters and the proliferation of trash along the shore await visitors to Paraguay's Lake Ypacaraí.

Americas Social Forum Calls for Agriculture Based on Solidarity

By Natalia Ruiz Diaz
Small-scale agriculture based on the principles of solidarity and cooperation is the only way to guarantee food sovereignty in Latin America, said peasant and indigenous activists meeting in the Paraguayan capital this week.

By Natalia Ruiz Diaz
The Fourth Americas Social Forum kicks off Wednesday in the Paraguayan capital with a colourful march through the streets, as some 12,000 people prepare to take part in the activities organised by 50 local groups and 550 organisations from Argentina to Canada.

By Natalia Ruiz Diaz
A year ago, Ramona Pereira was stuck with humdrum domestic drudgery in a rural village in Paraguay. Now she is the leader of a committee of women dairy producers in her community, and at 38 she feels like a new woman.

PARAGUAY: Clean Water Out of Reach for Native Peoples

By Natalia Ruiz Diaz
Of the many things that are not within the reach of everyone in Paraguay, safe drinking water is the one the indigenous population longs for most.

By Natalia Ruiz Diaz
Extensive cattle farming in northwestern Paraguay is the leading cause of deforestation in the Gran Chaco, one of the world's leading regions in biodiversity and South America's second largest forested area, after the Amazon.

By Natalia Ruiz Diaz
Paraguayan authorities admit they are powerless to stop the advance of ranching and soy farming into the forests of the Gran Chaco, which his home to more than half of the country's indigenous peoples.
Next Page »
ADVERTISEMENT ADVERTISEMENT