ASUNCIÓN, Feb 7 2012 (IPS) - “I want my own computer so that I can talk to my cousins who live in Italy,” says eight-year-old Camila Ojeda, sitting in front of a computer monitor on a bus that acts as a mobile cybercafé in the Paraguayan capital. 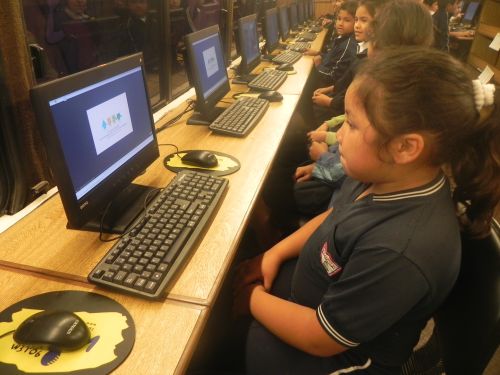 Camila Ojeda and friends watch a video on computer monitors in a bus converted into a cybercafé. Credit: Natalia Ruiz Díaz/IPS

Like Ojeda, who attends the Carlos Antonio López school, at least 5,000 children from the barrios of Loma Pytâ, Bañado Norte and Zeballos Cué in Asunción, and settlements further afield like Limpio, in Central department (province) and Villa Hayes in Bajo Chaco, have acquired computer literacy on this bus, the most eye-catching part of the community telecentres project run since 2005 by the cooperative radio station Radio Viva 90.1 FM.

Here, Ojeda has learned to do her school homework on the computer, which makes it easy “to see a lot of information at the same time”. When IPS arrived in the Loma Pytâ neighbourhood, she and her classmates were amusing themselves watching a video on the importance of hand washing, simultaneously displayed on the bus’s 17 monitors.

Her teacher, Nancy Ruiz, says that pupils who learn to use the computers perform much better in communication and mathematics, their work is better presented and they express themselves more fluently.

“Having access to technology opens their minds,” Ruiz told IPS as she watched the schoolchildren’s behaviour in front of the monitors.

According to the 2009-2010 Mercosur Human Development Report, barely five percent of Paraguay’s 6.4 million people have access to the internet, the lowest proportion in the Mercosur bloc, made up of Argentina, Brazil, Paraguay and Uruguay.

Telecentres have opened a window on ICT not only for children and adolescents, but also for adults.

“In these past six years of work, the project has taken technology to more than 14,000 people of all ages,” social communicator Zunilda Acosta, coordinator of the community telecentres programme for Radio Viva, told IPS.

But why would a radio station be interested in promoting the use of other media?

This “cooperative citizen’s radio station” came up with the idea in order to promote the democratisation of communications, a commitment it assumed as the sole representative of Paraguay at the second phase of the World Summit on the Information Society (WSIS) in Tunis, in November 2005.

One of the documents adopted at that summit, the Tunis Commitment, states “ICTs are making it possible for a vastly larger population than at any time in the past to join in sharing and expanding the base of human knowledge.”

Thanks to Radio Viva’s efforts, seven community telecentres have been established in the Asunción barrios of Puerto Botánico, Zeballos Cué, Loma Pytâ and Bañado Norte.

The telecentres were provided with equipment by Radio Viva, but community leaders in each barrio, usually members of the neighbourhood councils, administer them, set their opening hours and regulate the number of users. An estimated 2,000 people a year come to them to use the internet.

Acosta never ceases to be amazed every time she views the telecentres’ web sites on social networks, because, she says, “I find all my neighbours from Puerto Botánico (a barrio on the banks of the Paraguay river) surfing the internet, which never happened six years ago when we started the project.”

Local people served by the telecentres now appreciate that they need technology to improve their quality of life. “Many young people have landed a job through the social networks, and have realised how very useful the internet is in creating better opportunities,” Acosta said.

The project had start-up support from the Swiss and Finnish cooperation agencies. At present it is supported through agreements signed with the state telephone company COPACO and the National Electricity Administration (ANDE).

Radio Viva is an initiative of the independent Asociación Trinidad (Trinity Association for Citizenship, Culture and Development), which proclaims that “radio broadcasting, as the publicly spoken word, is an exercise in freedom of expression.”

In Loma Pytâ the computer class is over, and the pupils get off the mobile telecentre. Camila Ojeda realises she didn’t manage to search for certain information and she crosses her arms and bows her head in dejection. But she is all smiles again as soon as she is told that the computer bus will be back next week.