ASUNCIÓN, Nov 23 2010 (IPS) - “I go out with my cart and collect plastic bottles, cardboard, paper, plastic bags; that is my work,” said Laura Cardozo, proud member of a recycling group that works the Paraguayan capital’s streets. 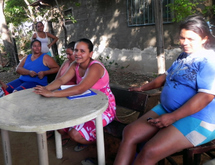 Shortly before beginning their work on a recent night, the board of the Asunción Association of Cart Drivers and Recyclers held its weekly assessment — in which IPS participated before accompanying one of the recyclers on a route.

“We decided to organise so that our demands would be stronger, because we are always ignored,” said Karen Ríos, coordinator of the group.

Their gathering site is a chapel in the Banco San Miguel neighbourhood, on the banks of the Paraguayan River. It is a residential and recreational area of Asunción, and home to some 300 families. The area is also known as Bañado Norte (North Marsh) because it is a flood zone.

This is where the recycling association was formed two years ago.

It began with 17 people, and has grown to 40 — 35 are women. The female presence is reflected in the board, which has only one man, the trustee.

One of the main motives for organising was that the workers felt exploited by intermediaries, the companies that purchased the collected materials to sell wholesale.

“We didn’t have a fixed price, but since we organised ourselves we demand respect for a amount determined by our producers,” explained Ríos.

Nevertheless, their incomes are still meagre.

Currently, for one kilogram of plastics they are paid the equivalent of 31 cents on the dollar, while for a kilo of cardboard it is just seven cents.

Mutual cooperation was another reason to come together as a group. To deal with emergencies, such as problems with the carts they use to transport the materials, the members receive economic aid to help them get out of the predicament.

“The association covers the total cost of repairs, but the individual is responsible for paying back 50 percent of that sum, which can be in payments over time,” said treasurer Benita Falcón.

According to its statutes, the owners of animal-drawn carts pay one dollar a month, other carts 30 cents per month, and those who collect and carry their recyclables in sacks, 20 cents per month.

Coordinator Ríos believes that above all, the association has one fundamental objective: to improve the quality of life of every one of its members.

As she spoke with IPS, Ríos, 27, a single mother of children ages five and seven, quickly and expertly separated out bottles and cardboard. She said her immediate hope is for her family “to enjoy happy holidays” in December.

She does not think about seeking other work, but she does hope that people stop treating her and her colleagues “as if we were nothing, that they won’t discriminate against us, and that they stop calling us ‘street people’.”

“I hope that when we arrive at their homes they won’t hide from us, or deny us a glass of water, because we are human beings who instead of stealing are sacrificing to provide food for our families,” she said, without missing a beat as she sorted.

“We all have hopes and dreams. Day to day, I fight so that my kids don’t go through the same things I did, so they have a decent future. That’s what I’m fighting for,” she said, before shifting the topic away from the personal to underscore that everyone believes that the Association’s work is producing results.

Earlier this year, in a series of meetings with Asunción municipal officials, the workers set up a programme that allows the Association to collect recyclable waste during and after various public events.

Asunción, with a population of just over a half-million people, generates about 1,000 tonnes of waste daily, of which 95 percent goes to the Cateura municipal landfill.

According to figures from the government’s planning office, the average rate of solid waste production in urban areas across Paraguay in 2002 was about one kilo per person per day.

There are more and more recycling workers on the streets and in the landfills. In the area surrounding the Cateura landfill, located south of Asunción, an estimated 1,000 “gancheros” live and work, known for the hooks, “ganchos”, they use to manipulate the materials. These workers are at high-risk for health problems.

In Paraguay, one of the poorest countries and one with highest economic disparities in the Americas, about 40 percent of its 6.3 million people live in relative or extreme poverty.

“The work of the recyclers in the streets is important because it reduces the volume of waste going to the dump by five percent,” Asunción city councillor Carlos Galarza told IPS.

Thanks to their effort, materials that can be re-used are not wasted, and the reduction of trash could reach 10 percent if the city had a recycling plant, he said.

But the Asunción city government has been talking about a recycling plant — without taking action — for such a long time that Galarza didn’t hesitate to refer to its “apathy” towards the problem.

“There is no follow-up by the municipal administration. There have been sporadic attempts to set up recycling programmes in recent years, but none were successful,” said the councillor.

An additional problem is the lack of a legal framework to regulate the work of the recyclers, or rights guarantees, or their obligations.

To ease hardships and to press for institutional guarantees, the Banco San Miguel recyclers are joining efforts with similar groups working in other residential zones along the river.

This process of extending the organising efforts has the support of the non- governmental Peace and Justice Service Paraguay, which is developing a training and legal advising programme for the recyclers.

Through workshops, the recyclers learn about human rights, gender equality and community leadership, aimed at boosting self-esteem and helping them to recognise that they have the same rights as all Paraguayans.

“The authorities have the obligation to listen and provide solutions to our complaints,” said Association treasurer Falcón, who sadly noted that many segments of society continue to reject the recyclers.

But she has channelled that pain, turning it into a song to motivate her colleagues. With a talent for singing and songwriting, she uses music to portray the daily — and nightly — experiences behind the cart, with lyrics sung to a slow and somewhat melancholy tune.

“Dawn is breaking / the sun is rising / I am walking; I go slowly with my cart / I recycle everything that I find / my cardboard and my plastic / a recycler am I / I recycle the disdain and strange glances from the people,” sings the group resolutely before dispersing to begin their day.