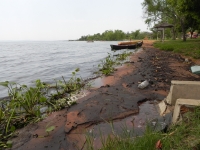 Garbage is an eyesore on this Paraguayan lakeshore. Credit: Natalia Ruiz Díaz/IPS

The state of Lake Ypacaraí is cause for concern because it is a major destination for domestic tourism during the Southern Hemisphere summer, especially in the municipality of San Bernardino, 48 kilometres from the capital.

The main attraction in San Bernardino, which has been dubbed “summer city,” is this 90-square-km lake. But it is no longer the blue jewel evoked in the song “Recuerdos de Ypacaraí” (Memories of Ypacaraí).

“Although we’ve been working for a long time with the local municipalities on reducing pollution, the waste keeps coming,” José Luis Casaccia, the government’s environmental prosecutor, told Tierramérica.

The lake is surrounded by at least 10 cities in the Central and Cordillera provinces, in Paraguay’s southeastern region.

The common denominator of those cities is the lack of sanitation systems. Sewage and wastewater run untreated into nearby watersheds, including the San Lorenzo and Jukyry rivers, and into area wetlands.

At this time of year, furthermore, green algae flourish along the shoreline.

“The algae is the product of excessive nutrients and lack of oxygen in the lake resulting from the over-accumulation of mud and sewage sediments,” said Casaccia.

In 2005, the Environmental Prosecutor’s Office found that about 100 industries were engaged in activities that harmed Lake Ypacaraí, which was declared a national park in May 1990.

The protection associated with park status was not enough to stop the effects of urbanisation or the damage caused by industries lacking adequate infrastructure, or the impacts of tourism in places like San Bernardino and Areguá.

Drastic measures are needed, according to Casaccia, who is a former environment minister. But the municipal authorities don’t see the problem as urgent.

San Bernardino’s Mayor Berna Espinoza said in a Tierramérica interview that he doesn’t think the situation of the lake is so serious.

“It has always been like this. The algae, for example, appear in hot weather; they rise to the surface because of the heat of the sun. They are not toxic, like some say,” said Espinoza.

Gustavo Florentín, president of the Paraguay Environmental Awareness Foundation, warns about the use of cleaning products, such as detergents with certain ingredients, which end up in the lake.

“The green appearance of the water is due to the excess of nutrients in the lake from household and industrial runoff with high content of sodium triphosphate,” Florentín told Tierramérica.

The chemical compound elevates the concentration of nitrogen and phosphate, which in turn drives the presence of organisms like algae.

There are plenty of plans for cleaning up Lake Ypacaraí, including some drafted by foreign experts.

“But there is always the drawback of the local share” in the costs for the plans, said Casaccia. The Paraguayan government was to contribute some 10 million dollars for a recovery strategy whose total cost was 60 million dollars.

The Ministry of Public Works presented a plan in August for the recovery and clean-up of the lake’s watershed, which is to be financed by the Korean corporation Samsung, as part of a corporate social responsibility policy. The budget for that initiative is five million dollars.