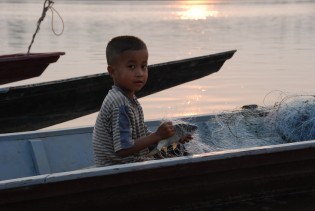 By Stephen Leahy
Plastic trash is altering the very ecology of the world's oceans. Insects called "sea skaters", a relative of pond water striders, are now laying their eggs on the abundant fingernail-sized pieces of plastic floating in the middle of the North Pacific Ocean instead of relying on a passing seabird feather or bit of driftwood.

By Amantha Perera
Reacting to a series of deadly crocodile attacks, the Sri Lankan government has drawn up plans to capture the free-ranging beasts and confine them to parks. Conservationists oppose this move.

By Johanna Treblin
A Catholic priest from the Philippines, a mother of three from Argentina, and the founder of the NGO Friends of Lake Turkana in Kenya all have one thing in common: they have helped to motivate their respective local communities to protect the natural environment around them and to stand up for their rights.

By Emilio Godoy
So-called water schools, which educate communities on the resource and its links with the environment, gender and climate change, are helping to raise awareness on proper water management in Mexico, at a time of severe drought.

By Patricia Grogg
In this eastern Cuban city, Danny Dip Leyva has begun to use her shower again after decades of hauling water into her house by hand. But in Aurora, a small neighbourhood on the outskirts of Havana, Manuel Roque still longs for a regular supply of piped water.

By Athar Parvaiz
As separatist militancy peters out in Kashmir, the valley is beset by armies of tourists who bring in the dollars but devastate the fragile ecology of ‘Asia’s Switzerland’.

By Correspondents
The saga of the Aral Sea is now a tale of two bodies of water. One holds the promise of a happy ending, the other remains enmeshed in tragedy.

By Rousbeh Legatis
Empowering rural women in the Iraqi marshlands, who mostly remain off the radar of international support, must involve local languages and dialects as well as local women trainers, says Mishkat Al Moumin, founder of the Iraqi group Women and the Environment Network (WATEO).

By Emilio Godoy
It takes 1,600 litres of water to produce one kilo of bread. This is the type of calculation used to measure a water footprint, the total volume of freshwater used to produce the goods and services consumed by people and communities.

By IPS Correspondents
As non-governmental organisations question the relevance of the World Water Forum being held here this week and slam its "corporate" nature, the United Nations says that a coordinated approach to managing and allocating water is critical.

By Desmond Brown
Two years after a severe drought wreaked havoc with a number of Caribbean countries, some are now adopting new strategies in a bid to prevent a repeat of a situation where countries were rationing water and imposing strict restrictions on residents.
Next Page »
ADVERTISEMENT ADVERTISEMENT