Stories written by Athar Parvaiz
Athar Parvaiz has been an IPS contributor since 2008. Based in Srinagar, Indian Administered Kashmir, he writes about environment, health, human rights and development issues. | Twitter | 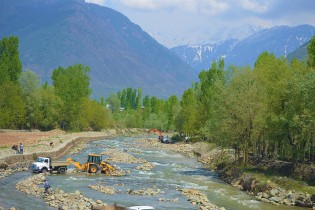 By Athar Parvaiz
Upon meeting an acquaintance after a long time, a young man at a Srinagar drug store asks: “Where did you disappear?” The innocuous question elicits an unexpected reply from the other: “Weigh your words. There are people whose loved ones have really disappeared.”

By Athar Parvaiz
The Ladakh of today is a different world from the one Skarma Namgiyal remembers as a child. Back then, he had taken for granted the breathtaking beauty of its landscape, the purity of the cold mountain air, and the sweet taste of water in its streams.

By Athar Parvaiz
Leaning on her daughter’s arm in the post-operative ward of a hospital in Srinagar, capital of the northern Indian state of Jammu and Kashmir, Raja Begam views the anti-infection pill she is being offered with a large dose of suspicion.
Next Page »
ADVERTISEMENT ADVERTISEMENT