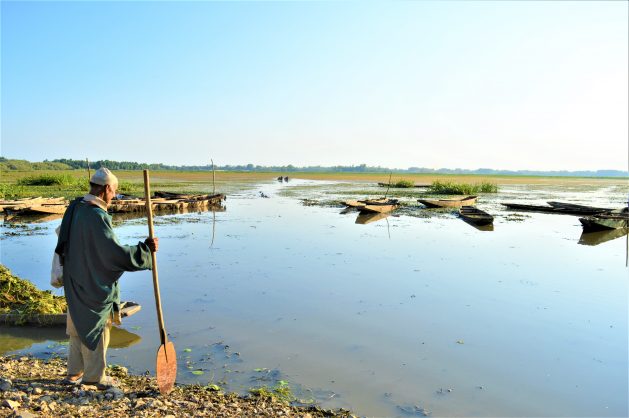 A fisherman at the eastern shore of Wular Lake. Credit: Athar Parvaiz/IPS

BANDIPORA, India, Feb 10 2020 (IPS) - Warming himself with a kangri (a firepot) kept under his pheran (a long winter cloak worn by Kashmiris), 66-year-old Mohammad Subhan Dar sat chatting with a bunch of his fellow villagers on a January afternoon on the edge of the road overlooking Wular Lake in Saderkote-Bandipora, northern India.

“When I was a teenager, this lake looked like a sea,” Dar told IPS when asked about his old memories of the lake.

Overlooked by magnificent mountains, Wular Lake is one of the largest freshwater lakes in Asia and the largest flood basin of Kashmir in Bandipora district, some 34 km north of Srinagar, the summer capital of Indian Administered Kashmir.

“But, today, as you can observe, many of its areas have become playing-fields for children and grazing grounds for cattle,” he said while referring to the heavy siltation of the lake, which has created vast land masses inside the lake.

Wular, which was declared an international Ramsar site under Ramsar convention in 1990, is not only a beautiful wetland, but has served the people of Kashmir for centuries earning praises from all, including its poets.

“How long will they remain hidden from the world … the unique gems that Wular Lake holds in its depth,” 20th century Urdu poet, Sir Muhammed Iqbal, once wrote about Wular Lake’s depth and water expanse.

Almost a century after Iqbal’s inquisitiveness, the depths of Wular have become heavily silted, its size reduced and its pristine waters suffering from heavy pollution.

In a detailed study of the lake, Wetlands International, a Netherlands-based not-for-profit that works to sustain and restore wetlands globally, says that the original area of Wular Lake was 217.8 square kilometres (sq. km), which included 58 sq. km of associated marshes. The area, the study says, was reduced from 157.74 sq. km to 86.71sq. km over a period of time from 1911 to 2007.  Overall, there was a 45 percent reduction in the lake area mainly because parts of the lake were converted for agriculture and willow tree plantations, the study says.

As per the estimates of Wular Conservation and Management Authority (WUCMA), about one fifth of the water-holding capacity of Wular Lake has been lost over the last three decades. This, WUCMA observes in a detailed report, is equivalent to an annual lake sedimentation rate of 2,470 acre feet.

“Catchments of Wular Lake are highly degraded. Against more than 50 percent of very dense forests in the 1950s, presently only 30 percent remain under dense forest cover,” the report says, adding that around 30 percent of the catchment area of the lake is bare and denuded.

Referring to the deteriorating quality of water of the lake, the report says that the water quality of Wular has deteriorated drastically due to discharge of high levels of untreated sewage into the wetland.

“Wular Lake, due to its geomorphological setting becomes a recipient of entire wastewater of the basin. Despite a rapid increase in human population, there has been no [updgrade] of the civic infrastructure leading to an increasingly higher proportion of wastes being dumped into the water-bodies.”

Dar told IPS that thousands of people living in dozens of villages around Wular Lake derive their livelihoods from fishing, and water chestnut and fodder collection from the lake. His estimates are corroborated by a study  from Wetland International, which has pegged the number of families dependent on the lake’s resources at 32,000, including 2,300 fisher households.

“Livelihoods of all these people are at stake if the deterioration of Wular is not checked,” Dar told IPS. According to Dar, Wular looks like a lake only in spring when rain water and snow-melt inundates it. “For the rest of the year, most of its areas stay dry. We literally have to haul our boats out because of the lack of water,” he said.

Abdul Razzaq, another fisherman, said that he previously used to only earn a living from fishing. But not anymore. Now he is forced to sells various items from a kiosk to supplement his income. “How can the fish population increase in the lake when it is so polluted and its area has got reduced to almost to its half as compared to its size in the past?” Razzaq asked IPS.

However, the youth living in the villages around Wular Lake are interested in the survival of the lake more for tourism reasons. “If the Wular Lake survives and stays in good condition that would mean an assured livelihood for educated people like me who are not interested in fishing,” Riyaz Ahmad, who recently graduated from university, told IPS. 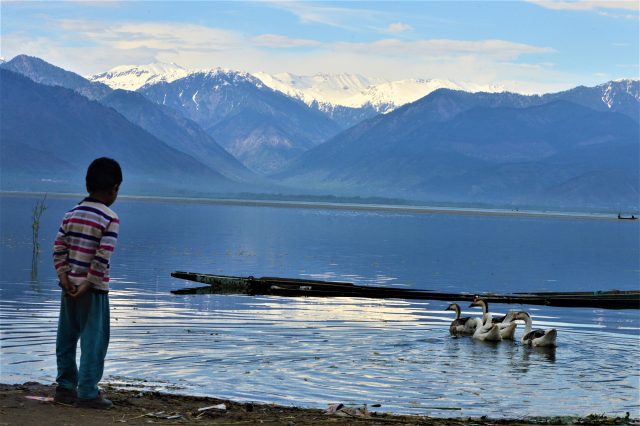 A boy watches his swans swim onto the lake. The north-western area of the Wular Lake retains water throughout the year. Credit: Athar Parvaiz/IPS

The planting and growth of willow trees on and around Wular Lake, the WUCMA report says, has severely altered the hydrological processes of the wetland. “These plantations act as barriers to silt laden waters of the river Jhelum forcing it to discharge the sediment load into the lake and thereby inducing loss of water holding capacity.”

A spatial analysis of the sedimentation pattern within the wetland, the report says, clearly indicates rapid siltation along the fringes of the plantation areas.

Based on an average plantation density of 1000 trees per ha, Wetlands International in its report titled Comprehensive management Action Plan (CMAP) for Wular Lake, has estimated that 2.1 million willow trees need to be uprooted using manual and mechanical means.

“These plantations act as a barrier to silt-laden waters of the River Jhelum forcing it to discharge the sediment load into the lake thereby reducing its water-holding capacity,” said Samiullah Bhat of Kashmir University’s Environmental Department. Bhat was part of the team which prepared the Environmental Impact Assessment for the removal of willow trees at Wular Lake.

Irfan Rasool Wani, a forest conservator and coordinator at WUCMA, told IPS that willow plantations in the lake extend to an area of 27.30 sq km.

Felling the willows will secure Wular

The Jammu & Kashmir government has devised a plan for felling over 2.1 million willow trees in Wular Lake in the next few years. It also plants to remove encroachments, reduce pollution and carrying out de-siltation and other treatment measures in and around the lake.

Except “some short term losses,” experts have found no faults with these conservation measures, but have recommended proper scientific methods for the removal process.

“The overall implication would be positive as there would be recovery of wetland resources, such as fish and aquatic vegetation in the medium to long term and generation of labour (for removal of willows) in the shorter run,” Shakil Romshoo, who heads Kashmir University’s Department of Earth Sciences, told IPS.

According to Bhat, the benefits of removing the willow trees from Wular “generally outweigh” the negative impacts of their removal. A report prepared by Bhat and other experts, however, recommends that the process of removal should be undertaken in a phased manner, and based on prescribed scientific principles.

Talking about the negative impacts, Bhat said that the decrease in shady area following the removal of the willow trees can lead to increased summer water temperatures and also have the ability to affect disease resistance in adult fish.

Wani, the WUCMA coordinator, agreed that the majority of over 2.1 million willow trees need to be removed in the coming years.

Mudasir Mehmood, another top official at WUCMA, said that 58,000 willow trees have already been extracted so far and WUCMA plans to remove a further 133,000 willow trees by the end of 2021.

“We are removing the trees selectively. This will help in avoiding abrupt environmental costs and market crash,” Mehmood said.