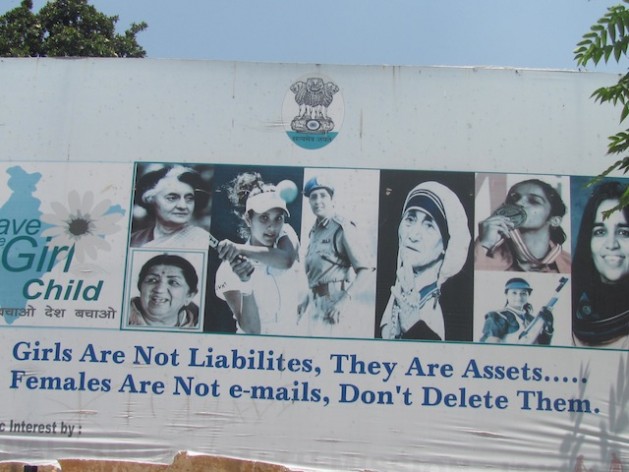 A billboard in the northern Indian state of Jammu and Kashmir promotes gender equality and protests violence against women. Credit: Athar Parvaiz/IPS

SRINAGAR, India, Jul 17 2015 (IPS) - Rizwana* had hoped and expected that justice would be served – that the man who raped her would be sufficiently punished for his crime. Months after she suffered at his hands, however, the perpetrator remains at large.

"We receive 1,000 to 1,500 complaints of domestic violence annually." -- Gulshan Akhtar, head of Srinagar’s only women’s police station
Hailing from a poor family in the northwestern part of the Indian administered state of Kashmir, Rizwana worked hard to finish her studies, knowing that if she landed a job it would help ease her family’s financial woes.

When an official in the frontier Kupwara District hired her as an assistant earlier this year, she thought she had struck gold. But she quickly discovered that the man’s support and eagerness to offer her a job was simply a front for ulterior motives.

“After working in the office for just a few days he summoned me to a room on the upper floor and bolted the door. Then he made sexual advances on me. When I objected to his behaviour, he forcibly raped me,” the young graduate told IPS.

Her entire family was traumatised by the experience; Rizwana quit her job and her mother suffered a panic attack that confined her to the hospital for weeks

Rizwana approached the State Women’s Commission (SWC) in Srinagar, the state’s summer capital, and pleaded that the official be terminated from his position and sent to jail.

“But so far nothing has happened,” she said. “While the women’s commission is supporting me, the rapist is yet to be brought to justice as he uses his influence to get away with the crime.”

Anyone who follows the daily headlines in this heavily militarised territory in northern India knows that Rizwana’s case is not unusual. Every year, thousands of women experience sexual or physical abuse, both in and outside their homes, though few come forward to report it.

Women’s rights advocates blame the conflict in Kashmir – which dates back to the 1947 partition of India and has claimed 60,000 lives in six decades – for nursing a culture of impunity that makes women extremely vulnerable to gender-based violence.

In 2007, the Indian government revealed that it had 337,000 army personnel stationed in the region. At the time, this amounted to roughly one soldier for every 18 persons, making Kashmir “the most heavily militarised zone” in the world, according to sociologist Bashir Ahmad Dabla.

In 2013, the United Nation’s special rapporteur on violence against woman stated in her final country report on India that legislative provisions like “the Armed Forces (Special Powers) Act and the Armed Forces (Jammu and Kashmir) Special Powers Act (AFSPA) has mostly resulted in impunity for human rights violations [since] the law protects the armed forces from effective prosecution in non-military courts for human rights violations committed against civilian women among others, and it allows for the overriding of due process rights.”

Noting that impunity for armed forces was “eroding fundamental rights and freedoms […] including dignity and bodily integrity rights for women in Jammu and Kashmir”, the rapporteur called on the Indian government to repeal the Act. 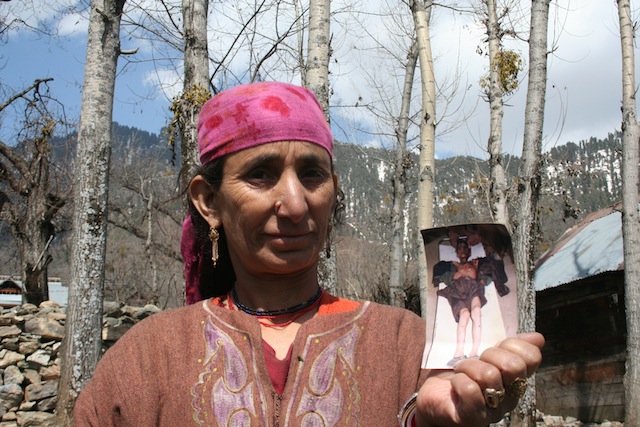 A woman holds up a picture of her son, injured in the conflict. Here in Kashmir, women often bear the brunt of fighting and some have been subjected to rape at the hands of the armed forces. Credit: Athar Parvaiz/IPS

Two years later, her recommendations are yet to be acted upon, with the result that not only armed forces but officials in any capacity feel at liberty to exploit women’s rights and freedoms, often in the form of sexual transgressions.

For instance, IPS recently gained access to a sexual harassment complaint filed by the female staff of the Kashmir Agricultural University with the State Women’s Commission.

Staff filed a joint appeal earlier this month so as to conceal each woman’s individual identity.

It stated: “Being the working ladies at the university, we want to share with you [the] bitter and hard realities we have been facing for the past many years”, adding that the male staff – and one official in particular – routinely harass the women, using their institutional authority to prevent the victims from taking action.

The complainants are demanding “strict punishment” for the culprits according to provisions on sexual harassment in India’s 2013 Criminal Law (Amendment) Act.

Nayeema Ahmad Mehjoor, chairperson of the SWC, told IPS that she acted on the appeal as soon as it was filed, and has already visited the university in order to take up the issue with the necessary authorities.

“They have assured me of initiating a fair probe, and we are expecting a detailed report within a few days,” she stated.

Domestic violence on the rise

These assurances are comforting but hold little weight in a society that routinely puts women’s issues on the backburner, a reality reflected in the low rate of reporting sexual crimes.

The situation is even worse in the domestic sphere, experts say, where spousal or intimate partner violence is on the rise.

Gulshan Akhtar, head of Srinagar’s lone Women’s Police Station, has been a busy officer over the past few years as she struggles to deal with a growing domestic violence caseload.

On a typical day, she receives between seven and 10 cases of domestic disputes involving violence towards the female partner.

“When this police station was established in 1998, it used to receive far fewer complaints compared to what we have been receiving over the past five-year period,” Akhtar told IPS.

“Now we receive 1,000 to 1,500 complaints of domestic violence annually,” she said, adding that the SWC receives an additional 500 complaints on average every year. 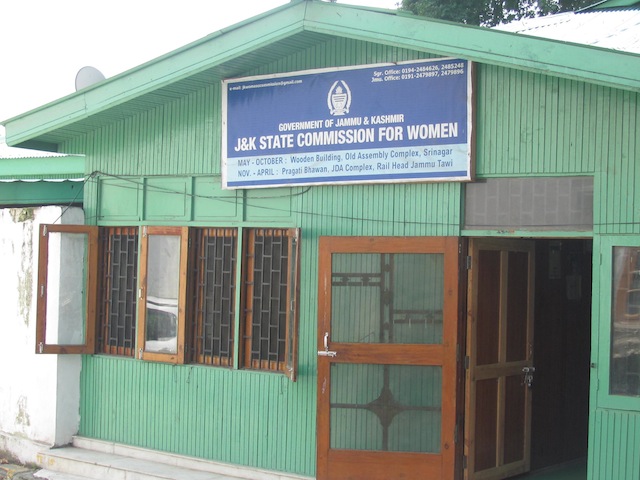 These figures – which are conservative estimates, considering that many women are silent about their suffering – reveal that every single day, over five Kashmiri women endure sexual or physical abuse.

Local news reports indicate that Jammu, the state’s winter capital, tops the list of districts with the highest number of domestic violence cases, recording over 1,200 separate incidents since 2009.

Earlier this year, newspapers quoting officials from the State Home Ministry stated that over 4,000 culprits have been booked in connection with these crimes, but rights groups maintain that prosecution levels are too low to act as a deterrent.

This past May, the women’s rights NGO Ehsaas organised a sit-in at Partap Park in Srinagar to draw attention to a surge in domestic violence.

Academics, journalists and activists gathered to mourn a woman whose husband had burned her to death the month before.

Addressing the crowd, Ehsaas Secretary and Women’s Project Consultant Ezabir Ali said, “It is high time to speak out against this barbaric form of human nature and a send message to the government to act strictly against such acts.”

The sit-in called attention to all the many forms of violence against women – from dowry killings and burnings, and from verbal and emotional abuse to rape. In 2013, according to statistics released by the Crime Branch, Kashmir recorded 378 cases of rape, an increase of 75 cases from the year before. Data for 2014-2015 is still pending.

Some experts say the increase in such heinous crimes is due to militarisation and the use of rape as a weapon of war.

A 2014 report by Human Rights Watch noted that “a local court recently ordered the reopening of the investigation into alleged mass rapes in the villages of Kunan and Poshpora in Jammu and Kashmir’s Kupwara district in 1991. Residents of the villages allege that soldiers raped women during a cordon and search operation.”

Because of the brutality involved in these incidents, and because the victims included old women and young girls alike, scholars and advocates have claimed that it set a precedent for violence against women, since the perpetrators have yet to be brought to justice.

Others say violence has risen together with women’s shifting socio-economic role in traditional Kashmiri society. With more women leaving the home to work, men feel their financial hold weakening.

“This is causing conflict as many men […] do not feel comfortable with women acquiring a [better] economic status,” author and sociologist Dabla told IPS.

IPS recently met two women at Srinagar’s Rambagh women police station, one of whom had come to lodge a complaint that her husband was forcing her to hand over her monthly earnings, or risk a divorce.

Indeed, surveys and studies undertaken by the women’s NGO Ehsaas reveal that 75 percent of Kashmiri men “felt their masculinity was threatened” if their wives did not obey them.

Activists working to safeguard women and create a more peaceful society overall say that deep and fundamental changes in both the law and social attitudes are necessary to achieve some degree of gender equality and women’s rights.

*Name changed for her protection