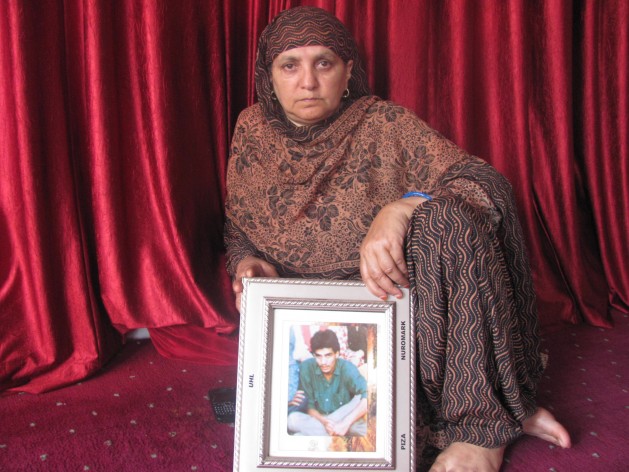 A Kashmiri woman with the picture of her son who went missing 17 years ago. Credit: Athar Parvaiz/IPS.

SRINAGAR, India , May 5 2014 (IPS) - Forty-seven-year-old Shahmala’s husband has been missing since 1993. In India’s restive Jammu and Kashmir state, she is what is known as a half-widow, a woman who has no clue whether her husband is dead or alive.

In December last year, a group of clerics issued a fatwa (Islamic decree) at a meeting in state capital Srinagar that women in Kashmir whose husbands had been missing for more than four years could remarry. But for Shahmala, the decree is of no consequence.

While the decision has been widely welcomed, many also say it has come too late as most disappearances in Kashmir took place during the 1990s and early 2000s.

She has lost her youth, her children have grown up, and she has weathered the blows of life as a single mother for 21 years. The prospect of marriage at this stage seems remote.

“It should have come much earlier in order to help hundreds of half-widows across Kashmir remarry,” law professor Showkat Sheikh, who teaches at the Central University of Kashmir, told IPS.

According to the Jammu and Kashmir Coalition of Civil Society (CCS), there are 1,500 half-widows in the state, where an insurgency since 1989 has resulted in many custodial disappearances of men. Human rights activists say most of these men were taken away by the security forces that were battling insurgents, and never seen again.

The ‘half-widows’ they leave behind are stigmatised, lonely and often under severe financial strain.

Many of these women join sit-ins by the relatives of missing persons every month in Srinagar to seek the whereabouts of their loved ones.

All these years, the half-widows of Muslim-majority Kashmir had to abide by Islam’s Hannafi school of thought that says a woman has to wait up to 90 years to marry again following the disappearance of her husband. But civil society groups appealed to Islamic scholars to find a solution to Kashmir’s problem.

The result was the new fatwa in December, a decree on remarriage coming for the first time since insurgency broke out in the state 25 years ago.

While the decision has been widely welcomed, many also say it has come too late as most disappearances in Kashmir took place during the 1990s and early 2000s. According to the Association of Parents of Disappeared Persons in Kashmir, at least 8,000 people have gone missing.

Some of these cases, as Professor Sheikh observes, are 15 to 20 years old. “The half-widows who are still young might think of remarrying, but it might not be helpful for those now advanced in age,” he told IPS.

Shahmala has struggled all these years to make ends meet. Following her husband’s disappearance, her two brothers-in-law started taking care of her and her two children.

“But after four-five years, their wives wanted to live separately,” Shahmala told IPS in Lolab area, 110 km north of Srinagar. “Our family disintegrated, though my brothers-in-law continued to help with my children’s education.”

This arrangement too did not last long. Both children eventually dropped out of school. “Fatherless children can hardly study, especially when their mother is also uneducated and without any source of income,” she said.

“My son is now 21 and drives a cab to fend for the family,” Shahmala said. “Had his father been around, he would have been in a college or university. But this is what fate has chosen.”

Human rights activists say Kashmir’s half-widows do not fall under a compensation policy. The Kashmir government does give an equivalent of around 3,300 dollars to the families of those killed in militancy-related incidents.

Dr. Peerzada Mohammad Amin, who teaches sociology in Kashmir University, told IPS: “I think Islamic scholars across South Asia and particularly in our part of the world focus more on ritualistic Islam than on social problems even though it is clearly mentioned in basic Islamic literature that religion can’t be separated from politics, sociology and economy.

“In all these years, society, state and religion have failed to respond to this human problem in Kashmir. If they come forward in a committed manner, things can still be done for these women.”

In spite of societal pressures, there are many half-widows, especially the younger ones, who would like another shot at a happy married life.

Mehmooda (name changed) is only 29. When her husband went missing five years ago, they had been married for just one-and-a-half years, and was pregnant.

She has thought of remarrying but continues to live with her in-laws on their insistence. “They are very good people and they take good care of me,” she told IPS. But, she says, they didn’t agree when her parents brought a marriage proposal for her.

“While I respect my in-laws and appreciate whatever they are doing for me, I have my whole life ahead,” she said. “Things don’t always stay the same.”