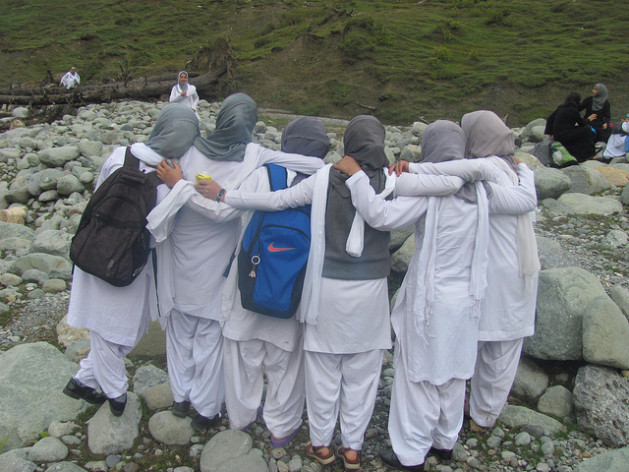 Education of girls is helping women learn about their rights in Kashmir. Credit: Athar Parvaiz/IPS

SRINAGAR, India , Dec 24 2013 (IPS) - Mehnaz Bano (not her real name), a 37-year-old woman in a hamlet in Indian Kashmir, is living a “satisfied and peaceful” life ever since she secured her daughter’s property rights before her remarriage – though not without a long and tedious struggle following her first husband’s death.

When her first husband died in 2003, she was just 27 years old. But her in-laws stood in the way of her second marriage. According to Bano, they argued that since they had invested money in their son’s wedding, they couldn’t let that money go to waste by allowing her to remarry.

“Initially, I took it as my fate and lived with it for six years. And I also wanted my daughter to grow up a bit. She was just a year old at the time of her father’s death,” Bano told IPS.

But, she added, as time went by, she started getting the feeling that she was no more than a slave in their household, given that she had no legal right to the family’s property.

“I asked them to leave me alone with my daughter or to allow me to remarry, in which case I would leave my daughter with them provided they registered one-third of the property in her name. But they agreed to neither of these two options,” said Bano, who has a master’s degree in history and teaches at a government school.

“I could easily provide my daughter with a quality education given that I had a steady monthly income, but they refused it vehemently.” She said that if her in-laws had allowed her to take her daughter with her, she wouldn’t have remarried, for the sake of her daughter.

But her in-laws’ “stubborn stance” compelled her to wage a legal battle against them. And once the case went to court, her in-laws approached her with a “compromise,” agreeing to register property in the name of Bano’s daughter on the condition that the girl would live with them.

“When I saw them budging, I was happy to settle out of court. So I withdrew the case,” she said. Bano now has two children – a daughter and a son – with the new husband she married in 2009. “I am glad that I pushed for my rights, and my daughter’s,” she said.

Women are just starting to become aware of their rights in the region of Kashmir in northwest India.

“It was mainly because of illiteracy. Women’s education used to be considered against the norms of Kashmiri society,” Bashir Dabla, a leading sociologist at Kashmir University in Srinagar, told IPS. Women’s employment has also long been looked down upon, he added.

But this trend, said Dabla, has been changing in the past few years. “Now women are not only seen in good numbers in educational institutions, but also in workplaces,” he said.

The result gazettes at Kashmir’s school board examination reveal that girls have topped the 10th standard annual exams six times in the past ten years. In Kashmir University a number of departments have an almost 50:50 male to female ratio.

Results have begun to be seen on the ground. Tasaduq Ahmad, assistant divisional commissioner of Kashmir, said his office received 917 complaints this year from women who were denied their share of the family property.

“We straightaway asked the concerned revenue officials to cancel the land registration of all the households where women had filed complaints,” Ahmad told IPS.

According to Ahmad, legislation passed by the Jammu and Kashmir legislative assembly in 2007 made it easier for women to claim their share of the family property. Earlier laws were not clear on women’s property rights.

Ahmad said women have increasingly filed complaints since the legislation was approved. “This was not the case 10 years back, but now such numbers go up each passing year,” said the assistant divisional commissioner, who has been serving in Kashmir’s revenue department for 23 years.

But social activists say women in Kashmir have a long way to go in fighting social prejudices against them.

“For example, when it comes to decision-making in a household, men continue to call the shots. Women are not yet in a position to assert themselves,” said Abdul Rashid Hanjoora, a prominent rights activist.