DEHRADUN, Sep 18 2011 (IPS) - India has been ranked the fourth most dangerous country in the world for women, but the widespread practice of selectively aborting female foetuses may make it the most hostile to the female gender. 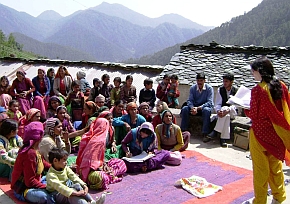 In the Himalayan state of Uttarakhand, where the child sex ratio (0 – 6 years of age) has dropped to 886 girls per 1,000 boys – according to provisional data in the 2011 census – a strong civil society movement is building up against what is known as female foeticide.

Uttarakhand’s record is far worse than the unwholesome national child sex ratio which has declined to 914 girls per 1,000 boys, from 927 per 1,000 in the last decennial census, conducted in 2001.

Demographers extrapolate that where there were six million ‘missing girls’ in India’s 2001 census, the figure has risen to 7.1 million in the 2011 count – which puts India’s total population at 1.21 billion people.

“Technology and literacy have played a part in promoting female foeticide as also a lack of principles and ethics in the medical profession,” says Shashi Bhushan of the Shri Bhuvaneshwari Mahila Ashram (SBMA), a Dehradun-based non-governmental organisation (NGO) that helps protect the rights of women.

Bhushan’s reference was to the proliferation of illegally-run sex determination clinics using cheap ultrasound machines across Uttarakhand and their being patronised by educated people.

“These tests always take place due to pressure from the husband or members of his family,” Devi told IPS.

“The addresses of ultrasound centres, where such services are provided clandestinely, are spread by word-of-mouth. These centres charge between Indian rupees 2,500 to 5,000 (52 – 105 dollars) to perform a sex determination scan,” Devi said.

Monitoring committees created under the Pre-conception and Pre-natal Diagnostic Techniques Act, that prohibits sex determination tests, are not active in most districts of Uttarakhand, except for sporadic raids on clinics suspected to be carrying out illegal procedures.

The SBMA has been campaigning for three years now to create awareness against the practice at the grassroots level under a programme called ‘Kopal’ (sapling). With support from Plan International and 13 other NGOs, the SBMA has focused on such issues as the adverse physical and psychological effects on women who undergo abortions to eliminate female foetuses.

When Madan Singh and his wife Radha Devi in Rampur, Chamoli district, were considering a sex determination test to avoid the possibility of having a third daughter a ‘nukkad natak’ (street play), mounted in their village under the Kopal project, convinced them against it.

Such successes encourage activists like Bhushan. “Our work with community-based organisations and youth groups has also seen an increase in birth registration rates and institutional deliveries.”

Bhushan believes that states like Uttarakhand are only now beginning to wake up to the enormity of the problem. “What is referred to as the ‘missing girls’ amounts to mass murder of girls or femicide,” he said.

Recognising that healthy attitudes to the girl child must begin early, the Kopal initiative includes mobilising youth groups to sensitise peers and elders about the vital role that girls play in any balanced community.

“The issue of dowry remains a powerful factor against having girls. A family with more men is considered strong and sons are perceived as assets,” observes social worker Bina Kala, 35, of Anjanisain village in Tehri district.

Under Kopal’s aegis, Bina helps organise ‘Mountain Children’s Forums’ which provide opportunities for gender relations to be discussed between groups of boys and girls.

“At these meetings we emphasise that in rural households the girl child contributes much more to the family economy than boys. She supports her mother in domestic chores and even sacrifices her dreams so that families can invest in the boys,” says Bina.

Health threats and cultural attitudes to women were factors in a poll by TrustLaw, a news service run by the Thomson Reuters Foundation, which ranked India as the fourth most dangerous country in the world for women, after Afghanistan, Congo and Pakistan, in results released in June.

At a Kopal meeting in Pithoragarh district, earlier this year, several girls complained that in spite of rising levels of literacy and education little has changed in the status of girls in the villages of Uttarkhand.

“At this meeting the boys responded by taking an oath that when they got back to their villages they would be more sensitive to their sisters and other girls,” recalls Bina.

At another Kopal meeting in the pilgrim district of Haridwar, a 17-year-old girl called Sonia emerged as a youthful voice in the fight against female foeticide in Uttarakhand.

“We meet regularly and discuss ways to bridge the gender gap. Our message is that girls must be heard and that they have the right to equal treatment,” says Sonia who nearly dropped out of school but is continuing with her studies with support from SBMA.

Such civil society initiatives are backed by central and state government schemes designed to enhance the value of a girl-child in the eyes of the community.

Three years ago, the Uttarakhand government announced the ‘Nanda Devi Girl Child Scheme’ under which every girl child born after January 2009 in families living below the poverty line is entitled to a fixed deposit worth 105 dollars that can be withdrawn with interest when the girl clears high school and reaches 18 years of age.

“Such schemes are slowly but surely making a change in a society where the desire to have a male heir is a difficult and complex social issue,” says Bhushan.