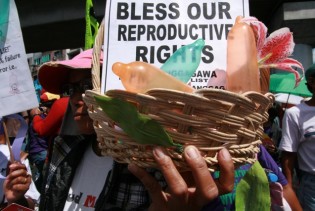 By Agnes Odhiambo
Three years ago, the African Union began a continent-wide campaign to reduce the number of women who die when pregnant or giving birth.

By A. D. McKenzie
Have women around the world become more empowered in their reproductive health and rights over the past 18 years? This is one of the questions that some 300 parliamentarians from around the world will be examining when they meet in Istanbul, Turkey, this week for the Fifth International Parliamentarians’ Conference on the Implementation of the International Conference on Population and Development (ICPD) programme of action.

By Isaiah Esipisu
The Garissa Maternal Shelter in North Eastern Province, Kenya is the only such facility in an area with the country’s highest maternal mortality rate. At 1,000 deaths per 100,000 live births, it is almost double the country’s average.

By Miriam Gathigah
Gender champions have lauded the Fourth High Level Forum on Aid Effectiveness for providing gender equality and the empowerment of women a special session, but there is dissatisfaction with Thursday’s Busan outcome document.

By Thalif Deen
When Adnan Nevic was born in Bosnia-Herzegovina back in October 1999, he was hailed as the world's six billionth person, triggering a visit to Sarajevo by then Secretary- General Kofi Annan.

By Paul Carlucci and Henrietta Abayie
Mary Mingle thought she had a boil on her breast, so she bought some medication and tried to treat it at home. Two months later, bothered by persistent pain, she went to the doctor.

By Zofeen Ebrahim
A newborn baby dies every four minutes in Pakistan. It was not always so. With a sound population policy set out in the 1950s, Pakistan was second only to Sri Lanka in infant and neonatal survival rates during the 1960s and 1970s (compared to Bangladesh, India, Iran and Nepal).

DR CONGO: Hard to Save All Women Suffering from Fistula

By IPS Correspondents
"Every quarter, more than a hundred women with fistulas - including many younger than 20 years old - are admitted for surgery in Maniema province," says nurse Julie Mawazo. "The number of affected women who don't have the means or awareness to come in must be far greater."

By Elizabeth Whitman
Political, private sector and civil society leaders from around the world gathered here on Tuesday to recommit to a year-old initiative, Every Woman Every Child, which aims to prevent 16 million maternal and child deaths by 2015.

By Isaiah Esipisu
Dr. Beldina Gikundi's daily prayer is that the handful of malnourished pregnant Somali women who go into labour that day at the Dadaab refugee complex do not have complications, which might require a caesarean section. Because Gikundi knows that Somali cultural beliefs mean that she and her staff at Hagadera Hospital will most likely not be able to immediately operate on the women and save their lives and those of their unborn children.

By IPS Correspondents
India has been ranked the fourth most dangerous country in the world for women, but the widespread practice of selectively aborting female foetuses may make it the most hostile to the female gender.

Unleashing the Power of Women and Girls

By Kanya D'Almeida
Kakenya Ntaiya was engaged at age five and would have been married by 13 if her mother had not insisted that she attend her small village school in Enoosaen, Kenya.

By IPS Correspondents
Cell phones and computer applications can help save the lives of thousands of mothers and children worldwide.

By Elizabeth Whitman
Each day, one thousand women die in childbirth and one million people become infected with sexually transmitted infections (STIs), including 7,000 cases of HIV. Yet these numbers are preventable, experts insist, when countries possess the resources and willpower to address and deal with them.

By Isaiah Esipisu
Agnes Kalunda’s doctor feared that because of her slight frame there was a high chance of her developing complications during delivery.
Next Page »
ADVERTISEMENT ADVERTISEMENT