Stories written by Elizabeth Whitman
Elizabeth Whitman is a freelance journalist based in Amman, Jordan covering politics, human rights, and other developments, including the Syrian refugee crisis. She has written for The Nation, Boston Review, Al Jazeera English, and others. You can follow her @elizabethwhitty. | Facebook || Twitter | 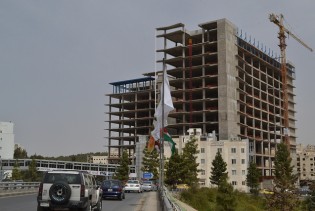 By Elizabeth Whitman
Abu Waleed isn't quite sure where to begin his litany of grievances. Bugs that chomp their way through the mint he grows, or the dry well that forces him to pump water from a half kilometre away? Or perhaps the 160 dinars he spent on spinach seeds only to see scant growth after planting.

Choked Media Struggles to Speak Out in Jordan

By Elizabeth Whitman
Journalists and media activists have begun to confront the Jordanian government over its moves to block local news websites. Two months now after the blockage, many of these sites are struggling.

By Elizabeth Whitman
One day after U.S. Attorney General Eric Holder outlined the statutory justifications for "targeted killings", civil liberties groups here continue to question the legality of the Obama administration's policy, particularly as it applies to the rights and very lives of both U.S. citizens and foreign nationals.

By Elizabeth Whitman
When the fast food chain McDonald's decided to add oatmeal to its menu in January 2011, it literally sugar-coated the offering as a "portable, affordable and balanced breakfast solution... to help make it easier and more inviting for our guests to eat more whole grains and fruits".

By Elizabeth Whitman
These days in Syria, "people dare not step a foot outside their homes because they're being shot at. And so they pass food from home to home by ropes through windows," Navi Pillay, U.N. High Commissioner for Human Rights, told reporters Friday.

By Elizabeth Whitman
"The prospect of arriving home... being arrested at the airport - that's kind of scary," said Osazeme O., a dual citizen of Nigeria and the UK, in a wry understatement.

By Elizabeth Whitman
In polished versions of U.S. history, the near-extermination of Native Americans in the United States is an unsightly blemish that continues to be glossed over to this day. Yet the struggles of indigenous peoples are not exclusive to the United States and have grown increasingly complex in modern times.

By Elizabeth Whitman
The 925 million people who went hungry in 2010 are just one facet of an ever-worsening food security crisis. Both food producers and consumers face the consequences of price volatility and unsustainable agricultural practices - challenges that leave leaders on local and global levels alike seeking sustainable models for agriculture.

By Elizabeth Whitman
Water is the lifeblood of this planet, whose inhabitants are watching its accelerated spiral into crisis mode even as they struggle to address the issues and lifestyles that are stretching the earth's resources thin.

By Elizabeth Whitman
A new report has highlighted a connection - and not always a positive one - between U.S. foreign aid to Colombia and Mexico and violence and crime rates in those countries, pointing out that U.S. policy toward Mexico deserves careful application of lessons learned from the aid the U.S. has supplied Colombia since 2000.

By Elizabeth Whitman
The number of people flocking to cooperative banks has recently skyrocketed in the U.S., with 650,000 people joining credit unions just since late September. Their rationale: financial cooperatives offer a more secure and socially just alternative to big commercial banks – or a way for the 99 percent to fight the one percent.

By Elizabeth Whitman
The United Nations unveiled its 22nd annual Human Development Report on Wednesday, with grave warnings that unless countries take action against climate change and implement sustainable solutions, progress in human development will be in serious jeopardy.

By Elizabeth Whitman
Hailed as economically viable and socially responsible, cooperatives have over one billion members worldwide and can be found in sectors ranging from agriculture to finance to health.

By Elizabeth Whitman
Over the past four decades in Latin America and the Caribbean, women have made remarkable strides in education, health, labour, and beyond, with girls now outperforming boys in school, the rate of working women more than doubling in many countries, and female participation rising in politics.

By Elizabeth Whitman
Beaten. Chained to walls. Exposed to extreme temperatures. Deprived of food, water and sleep. Hassan bin Attash, Sami el- Hajj, Muhammed Khan Tumani and Murat Kurnaz suffered years of inhumane and illegal treatment while in U.S. custody either at Guantánamo Bay or in military bases in Afghanistan.

By Elizabeth Whitman
After much delay, Finland has been chosen to host a 2012 conference to establish a zone free of weapons of mass destruction (WMDs) in the Middle East. The meeting aims to bring together all Middle Eastern countries, some of which share a long history of disagreement, such as Iran and Israel.

By Elizabeth Whitman
In a major breakthrough Tuesday, researchers announced that the vaccine candidate RTS,S reduces the risk of malaria by half in children ages five to 17 months, first results from a continuing phase three trial showed.

By Elizabeth Whitman
What was once a glaring weakness in the seven-month Syrian revolution and uprising against the government of President Bashar al-Assad is now slowly transforming into one of its strengths with the coalescence of opposition groups into the Syrian National Council (SNC) earlier this month.

By Elizabeth Whitman
History is strewn with proof of the destructive capabilities of nuclear weapons and power, yet science is also replete with evidence that nuclear power has many advantages.
Next Page »
ADVERTISEMENT ADVERTISEMENT