UNITED NATIONS, Nov 10 2011 (IPS) - The number of people flocking to cooperative banks has recently skyrocketed in the U.S., with 650,000 people joining credit unions just since late September. Their rationale: financial cooperatives offer a more secure and socially just alternative to big commercial banks – or a way for the 99 percent to fight the one percent. 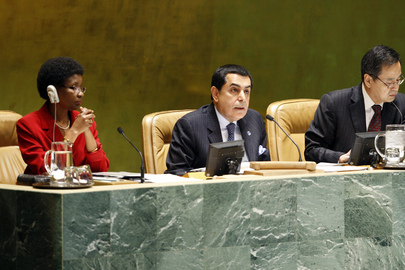 Nassir Abdulaziz Al-Nasser, President of the U.N. General Assembly, addresses the GA at the launch of the International Year of Cooperatives. Credit: Devra Berkowitz/UN Photo

Cooperatives, and particularly the benefits that accompany membership in one, whether social, financial or political, may have been a sweet and recent discovery for people in this country, but for many in other parts of the world, cooperatives, or co-ops for short, are old news.

Still, with the European debt crisis and Greece and Italy in tatters, significant popular unrest in cities around the globe and climate change an omnipresent, albeit insufficiently addressed, global concern, experts, leaders and frustrated civilians around the world are shining fresh light on cooperatives in the search for viable alternatives to existing financial and political models.

When singing their praises of cooperatives, experts cite a variety of reasons, ranging from their role in fostering sustainable development to supporting local businesses and communities.

The United Nations has hailed cooperatives and designated 2012 as the International Year of Cooperatives. The world body said in 2009 that “financial cooperatives contribute significantly to ensuring access to affordable financial services, access that is especially critical given the current economic crisis”.

A cooperative, or for short, co-op, is an enterprise that is controlled and owned by its members. It can provide nearly any service or good and exist in any sector of the economy.

Members control cooperatives, set their policies and make decisions regarding them, usually following the one person, one vote rule.

Profits are usually designated to reserves, although part of the profit may be allocated to cooperative members through a patronage dividend, which reflects a member's use of the cooperative's products and services.

Co-ops have historically risen out of times of hardship requiring innovative solutions. Some of the first cooperatives grew out of communities of farmers and workers in Germany and England in the 19th century.


In an allusion to the film “V for Vendetta”, Nov. 5 was dubbed Bank Transfer Day by activists who explicitly stated the initiative’s separation from the Occupy Wall Street movement. Nevertheless, the connection between withdrawing funds from commercial banks and the Occupy Movement’s criticism of those very banks is impossible to ignore.

Although leaving traditional banks to join smaller financial cooperatives may be just one way the 99 percenters aim to fight back against the one percent, financial co-ops have many other far- reaching benefits, experts say.

Throughout the ongoing economic crisis, for instance, cooperative banks have proved their worth and resilience by faring far better than many of their non-cooperative counterparts.

A 2009 report by the International Labour Office (ILO) found that “the cooperative model of enterprise survives crisis, but more importantly that it is a sustainable form of enterprise able to withstand crisis, maintaining the livelihoods of the communities in which they operate”. The report noted, furthermore, cooperatives’ abilities to avert future crises.

Michael Gertler, acting director for the Centre for the Study of Cooperatives at the University of Saskatchewan, agreed that following the economic crisis, financial cooperatives, including credit unions, “have experienced growth as a result of increased visibility, positive publicity, and people shifting their accounts from conventional banks to credit unions”.

Credit unions are just one type of financial cooperatives. In particular, credit unions do not draw on outside capital to finance their loans. Rather, they pool members’ savings and shares, and members generally receive higher returns on savings and fewer fees, according to the World Council of Credit Unions.

Credit unions also provide financial services to those who otherwise may not have access, the U.N. has noted, and perhaps most significantly, “Unlike other types of financial institutions, credit unions … have not otherwise been the cause of the current economic circumstances.”

“Cooperatives are more prudent, less willing to take excessive risks that impact members and customers, because these people are also the owners,” Monique Leroux, president and CEO of Desjardins Group, the largest cooperative financial group in Canada, told IPS.

“Because cooperatives are more democratic, they are less likely to follow the herd or be driven by the ambitions or ego at the top of the organisation,” she said.

In addition, most cooperatives operate on a one person, one vote principle, rather than basing votes on shares held. All of these practices and principles help to build sustainability and stability, to which the higher survival rates of cooperatives can attest.

A study in Quebec in 2009 found cooperatives’ survival rates to be significantly higher than those of traditional businesses – after 10 years, 44 percent of coops had survived, compared with 20 percent of other new businesses.

Credit unions “are often seen as part of the social economy and as contributing to community economic development,” Gertler noted.

Financial coops’ prevalence varies among regions. Western Europe and Japan, for instance, have a substantial sector of financial cooperatives, said Jean-Louis Bancel, president of the ICBA, in an interview with IPS.

Others would distinguish between Canada and the U.S. in that statement. Leroux noted that in Quebec, the cooperative business model is a 22-billion-dollar industry, and 70 percent of the population is a member of a co-op.

Gertler said, “In Canada the sector is much bigger by various measures,” in comparison to the U.S. Similarly, the cooperative movement is “particularly strong” in some European countries, such as Germany, and certain Asian ones, like Sri Lanka.

Financial coops’ success and popularity depends a lot on government policies. One drastic example is found in Romania and Hungary, Bancel said, where cooperative banks are prohibited. A more common challenge facing cooperatives is “to be recognised for what they are” and to be given the opportunity “to play on an even playing field”.

Politicians “have to acknowledge the difference” between cooperatives and institutions with different structures, and between different types of co-ops, Bancel said. Or, as Leroux said, “Each one is unique with its own mandate and service offer in its community.”

With so much positive hype engulfing cooperatives, their disadvantages seem lost in the fray.

Often, he said, local laws have an impact on cooperatives’ transparency.

On another level, expanding while maintaining contact with members can also be tough. “That’s always a challenge: to get bigger, and stay cooperative.”