UNITED NATIONS, Oct 18 2011 (IPS) - In a major breakthrough Tuesday, researchers announced that the vaccine candidate RTS,S reduces the risk of malaria by half in children ages five to 17 months, first results from a continuing phase three trial showed. 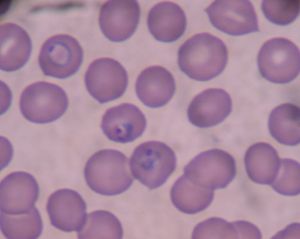 The plasmodium parasite, seen here in the ring stage taken from a blood smear, is transmitted through infected mosquitoes. Credit: Bobjgalindo/wikimedia commons

The results have tremendous implications, as malaria is responsible for nearly 800,000 deaths annually. The disease kills one child every 45 seconds in Africa, where it accounts for approximately 20 percent of childhood deaths, according to the World Health Organisation (WHO). More than 85 percent of all malaria deaths occur in Africa.

The trial was conducted at 11 trial sites across seven different countries in sub-Saharan Africa. Three doses of RTS,S reduced the risk of malaria for children by 56 percent for clinical malaria and by 47 percent for severe malaria, according to analysis of data from tests on the first 6,000 children aged five to 17 months over a 12-month period following vaccination.

The trial was also conducted on infants aged six to 12 weeks. Analysis of those results is expected to be available at the end of 2012, with more data about the long-term efficacy of the vaccine available by 2014.

With 15,460 infants and children participating in the trial overall, this trial is the largest malaria vaccine trial to date.

“These data bring us to the cusp of having the world’s first malaria vaccine,” said Andrew Witty, CEO and president of the UK drug company GlaxoSmithKline (GSK) Biologicals, which is developing the vaccine in partnership with the PATH Malaria Vaccine Initiative (MVI).

In addition to the potential of RTS,S to save lives, the results are also significant because they highlights two common but incorrect assumptions about malaria, said Regina Rabinovitch of the Bill and Melinda Gates Foundation, which helped fund the research for the vaccine candidate.

The first is the public’s assumption that a vaccine for malaria already exists and the second is the scientific world’s belief that one cannot be found. Though it never offers full protection, immunity to malaria can be developed over years of exposure, so most deaths from malaria occur in young children.

Scientists at first created RTS,S in 1987. In 1993, it was first tested in the United States and Belgium on healthy adults, and in 1998 it was tested for the first time in Africa on adults in The Gambia.

Scourge of the developing world

Half of the global population is at risk of malaria – in 2009, the disease was present in 108 countries. Most cases are found in sub- Saharan Africa, with Asia, Latin America, the Middle East and parts of Europe also at risk.

The parasite Plasmodium, transmitted by infected mosquitoes, causes malaria in humans by multiplying in the liver, then infecting red blood cells.

The disease is “truly a disease of poverty”, said the United Nations Children’s Fund (UNICEF), and it disproportionately afflicts the poor, whose housing structures usually offer limited protection against mosquitoes.

Malaria’s economic impacts are widely recognised in Africa, where it hinders economic growth and development. Although methods for preventing malaria, such as sleeping under insecticide-treated nets, can be effective, many children, especially in Africa, do not sleep under these nets and do not have immediate access to treatment once infected.

The parasite has also become increasingly resistant to anti-malarial treatments, complicating efforts to address the disease.

In countries with high levels of malaria transmission, malaria can decrease gross domestic product (GDP) by as much as 1.3 percent, the WHO says. Lost productivity due to malaria has cost Africa approximately 12 billion dollars annually.

The results of the trial are encouraging, but “we still have a ways to go”, said Tsiri Agbenyega, a principal investigator of the trial and chair of the Clinical Trials Partnerships Committee, during a telephone press conference based in Seattle on Tuesday.

Still, “this potentially translates into tens of millions of malaria cases in children being abated,” he said.

“Our intention is to supply this vaccine at the lowest price possible,” he emphasised. The vaccine would be priced at five percent more than the actual cost of the drug, with the five percent being reinvested for further research into malaria and other diseases.

“We are not there yet, but well on our way to developing a vaccine for malaria,” Christopher Elias, president and CEO of said.

As if to underscore in advance the relevance of this breakthrough and the necessity of developing new methods to combat malaria, the U.N. warned Monday that two million Somalis are at risk of contracting the disease.

They are already suffering from drought, famine and conflict, and the U.N., along with related agencies, is stepping up its response to prevent a large-scale outbreak.