UNITED NATIONS, Nov 2 2011 (IPS) - The United Nations unveiled its 22nd annual Human Development Report on Wednesday, with grave warnings that unless countries take action against climate change and implement sustainable solutions, progress in human development will be in serious jeopardy. 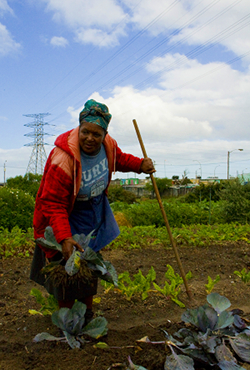 South Africa's plans for adaptation offer little to smallholder farmers, who are among those most vulnerable to climate change. Credit: Kristin Palitza/IPS

Trends over the past 40 years indicate extraordinary progress in health and education in some of the world’s poorest countries, and if those trends continue, by 2050, most countries will have achieved or surpassed standards enjoyed now only by the top 25 percent of countries.

But if business as usual goes on, progress will not. In fact, “it might actually stop” altogether, Bill Orme, spokesperson for the report, told IPS.

Using a human development index (HDI) to gauge countries’ progress in development in the areas of income, life expectancy and schooling, the HDI incorporates more than just financial aspects of growth and development.

The report also utilised a multidimensional poverty index (MPI), introduced in last year’s version of the report, which measures health and education, to gauge poverty levels with more nuance than simply measuring income.

But unsustainable practices are not just ones that are environmentally damaging, Orme emphasised. Practices that are equitable for all are also key. “Acute inequality is incompatible over the long term with human development progress,” he explained.

“If you look at societies that have smaller degrees of inequality,” Orme said, “there’s an argument that those societies are in some ways better equipped” to handle current and future problems, such as slowing the pace of climate change.

Norway, Australia and the Netherlands were ranked at the top of the HDI, with the U.S., New Zealand, Canada, Ireland, Liechtenstein, Germany and Sweden completing the top 10. The Democratic Republic of the Congo, Niger and Burundi fell at the bottom of the HDI.

However, countries’ rankings changed in the inequality-adjusted HDI. The U.S. dropped from fourth place to 23rd, but Sweden jumped from tenth to fifth place.

The inequality adjusted HDI measures how uniformly income, schooling and life expectancy are distributed across a country.

For example, if the adult population of a country has an average of 12 years of schooling, but that average is in reality due to some having 16 years and others three or four, then education would be poorly distributed in that country, despite a national average that appears decent.

Although the inequality adjusted HDI does not directly reflect where those gaps tend to occur, such as along gender or racial lines, it does emphasise the contrast between the high and low ends of the income, schooling and life expectancy scales.

Unsurprisingly, the U.S. dropped 19 places because of its extreme disparities income distribution as well as life expectancy.

Virtually blameless, but hit the hardest

Even though they contribute the least to the problem, the most disadvantaged people in the world deal with the harshest repercussions of climate change, the report said.

Developed countries have the greatest carbon footprint, but developing countries are feeling the effects the most, experiencing the greatest loss in rainfall and the greatest increase in its variability.

Moreover, poor communities in developed countries face a “double burden” of deprivation, Allan Fuchs, a researcher for the report, told reporters. Not only are they vulnerable to the global effects of climate change and land degradation, but they deal with environmental challenges on a household level, such as with indoor air pollution and dirty water.

Furthermore, people in developing countries depend upon land and natural resources more directly than those in developed countries, so they feel the impact of land degradation and extreme temperatures and precipitation more acutely.

Women in poorer countries are affected by the adverse repercussions of climate change more than men, as women “engage disproportionately in subsistence farming and water collection work”, the report said.

“In the absence of reform, the links between economic growth and rising greenhouse gas emissions could jeopardise the extraordinary progress in the HDI in recent decades,” warned the report.

It outlined three scenarios – base, environmental challenge and environmental disaster – and in each projected the impacts of climate change on progress in development until the year 2050.

The worst case scenario, environmental disaster, projected that the global HDI would fall 15 percent below the baseline scenario’s projections, which were based upon current rates of progress.

Even in the second worst scenario, environmental challenge, the global HDI would fall eight percent below the baseline and 12 percent below for South Asia and sub-Saharan Africa by 2050.

The report is “fundamentally analytical”, Orme told IPS, adding, “We’re not in the process of making policy prescriptions.” Although the report is commissioned and published by the U.N. Development Programme, it is nonetheless an independent one.

Still, the report had several recommendations.

One solution it recommended was an international currency trading tax of .005 percent on foreign exchange trading to generate revenues of almost 40 billion dollars per year. This money would help close the gap of 105 billion needed annually just to help finance adaptation to climate change.

Fuchs noted that although this tax was first argued for in the 1994 version of the report, the tax would be much more politically and technically feasible today.

The report also called for the immediate implementation of a U.N. universal energy access initiative to help the 1.5 billion around the world who do not have access to electricity, which has a proven positive impact on both health and education.

As if to point out the lack of global action to address climate change over the years, the report quoted from a 1987 U.N. report, “Our Common Future”.

“Our inability to promote the common interest in sustainable development is often a product of the relative neglect of economic and social justice within and amongst nations.”