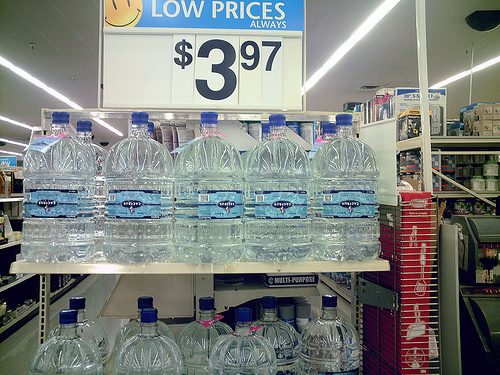 A 2008 investigation by the Environmental Working Group found bottled water to be "chemically indistinguishable from tap water". Credit: Clean Wal-Mart/CC BY 2.0

NEW YORK, Nov 19 2011 (IPS) - Water is the lifeblood of this planet, whose inhabitants are watching its accelerated spiral into crisis mode even as they struggle to address the issues and lifestyles that are stretching the earth’s resources thin.

Outwardly, the global water crisis appears straightforward – people simply consume too much water. A key factor in this spiral is the fact that water has been morphing from a natural resource into a marketable – and costly – product, experts and reports have shown.

Exploring different aspects of the global water crisis, from privatisation of water to corporations marketing to minorities, reveals that water – as a human right, as a product, as a natural resource – is firmly entangled with a host of issues in areas, including public health.

By 2025, 1.8 billion people will live in areas with absolute water scarcity, and two-thirds of the world’s population – projected to reach eight billion by then – will be under stress conditions. Some 1.4 billion currently lack access to safe water.

Humans consume water at a rate more than twice that of population growth, according to the U.N.’s Food and Agriculture Organisation (FAO). In 60 percent of European cities with a population greater than 100,000, groundwater is used more quickly than it is replenished, said the World Business Council for Sustainable Development.

Yet even though humans consume more water than is sustainable, some would say that people do not drink enough water, and when they do, they’re often being tricked into doing so.

“Pure Life marketing specifically targets Latino immigrants in the United States, many of whom have suffered the consequences of poor public water infrastructure in other parts of the world,” said a fact sheet from CAI.

An article published in Forbes Magazine in August also pointed out how corporations including Coca Cola, Las Oleadas and Ravinia Partners create brands that are Latino-specific, for instance, or target minority mothers.

It also noted how water companies’ slogans often promise water that is utterly natural, pure or fresh. A label on an ordinary Poland Springs bottle, for instance, which is produced by a Nestle subsidiary, reads “Pure Quality” and “100 percent natural spring water” and features a picturesque mountain peak and in the background.

“Nestle Pure Life is a meaningful brand in the Hispanic population,” she said, but added that it is “widely distributed across many, many different audiences”.

Lazgin acknowledged that Nestle Pure Life water “comes from wells or municipal systems”, but emphasised that it undergoes an “intensive purification process”.

Still, a 2008 investigation by the Environmental Working Group found bottled water to be “chemically indistinguishable from tap water”, the summary of the investigation said.

“But with promotional campaigns saturated with images of mountain springs, and prices 1,900 times the price of tap water, consumers are clearly led to believe that they are buying a product that has been purified to a level beyond the water that comes out of the garden hose,” it added.

Targeting minorities can be seen as exploitation – a recent study found that Latino and black parents are three times more like to choose bottled water over tap water for their children – but the situation is not so black and white.

Hispanic children, according to the New York Department of Health, are at a higher risk of obesity than other groups.

“Marketing for sugary drinks also may be targeted disproportionately more often to minority and low-income youth who consume more of these products and are at higher risk of obesity and related diseases,” found a recent report by Yale University’s Rudd Centre for Food Policy and Obesity.

By comparison, Nestle Pure Life spent 9.7 million dollars in advertising expenditures in 2009, according to a Food and Water Watch report.

No longer is the problem merely the fact that bottle water has become a commodity that is marketed to a targeted audience.

Water is inarguably a healthier alternative to soda, so perhaps marketing water, albeit bottled, to the very audiences who are at higher risk of obesity, for instance, serves as a meagre counterbalance to companies selling sugary drinks, even if many believe water should not be sold as a commodity in the first place.