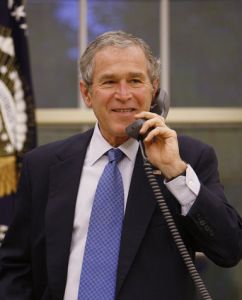 Previously, CCR and CCIJ had submitted two letters, one on Sep. 29 and another on Oct. 14, to Robert Nicholson, Canadian minister of justice and attorney general, with the first letter urging him to launch a criminal investigation against former U.S. President George W. Bush for “authorising and overseeing his administration’s well- documented torture program”.

Attash, currently detained at Guantánamo, has been imprisoned without formal charges for more than nine years. El-Hajj, Tumani and Kurnaz have all been released.

The attorney general took no action in response to the letters, so as promised, CCIJ submitted a private prosecution case on Oct. 20 on behalf of the four men. More than 50 human rights groups and prominent individuals supported the case.

As a signatory to the Convention Against Torture, Canada is “obligated to prosecute or extradite for prosecution anyone present in its territory for whom there is a reasonable belief he has committed torture”, the Sep. 29 letter noted.

Bush was scheduled to, and was, on Canadian territory during his visit Surrey, British Columbia for a speaking engagement at an economic summit on Oct. 20.

Under the United Nations Convention Against Torture, which has 147 signatories, including the U.S. and Canada, parties to the convention are supposed to have committed to promptly investigate, prosecute and punish torturers.

CCR and CCIJ had compiled a 65-page indictment, with 4,000 pages of supporting material, presenting the case against former Bush for authorising and overseeing torture programmes. The indictment was included in the Sep. 29 letter to the attorney general.

In that letter to Nicholson, CCR and CCIJ said, “Mr. Bush bears individual and command responsibility for the acts of torture committed by his subordinates that he ordered, authorised, condoned, or otherwise aided and abetted.”

“The legal basis for the case is exceptionally strong,” Matt Eisenbrandt, legal director of CCIJ, said in a statement. The four men “have a right to have a court of law examine the evidence and hear the legal arguments”.

In a statement, Katherine Gallagher, senior staff attorney at CCR, who worked on the case, called Canada’s decision “a stark example of politics trumping law”, adding, “The government of Canada obviously did everything it could to protect George Bush from facing criminal accountability for torture.”

Earlier this year, in February, two torture victims planned in Geneva to file criminal complaints for torture against Bush during a scheduled visit to the country, because Swiss law requires alleged torturers to be on Swiss soil before any investigation against them can be opened.

Bush cancelled his visit the night before the complaints, which over 60 human rights organisations supported in a joint letter.

In an interview with IPS, Gallagher called the move by the Canadian government “deeply, deeply disappointing” and “a shocking departure for a country that’s supposed to live under the rule of law”.

This decision “can only be described as a political move” to protect Bush, she said.

The case may be considered disappointing in itself, but its potential implications could be downright alarming, rights activists warn.

Both the Canadian government’s decision and the lack of U.S. action against Bush and officials in his administration, which oversaw the U.S.’s well-documented torture programme, leave a “dangerous and lasting legacy of the impunity of U.S. officials” and serve as “a real degrading of the entire system of law and international human rights”, Gallagher said.

From here, future steps depend on the information CCR and CCIJ can obtain regarding the Canadian government’s basis for moving to stay the case, especially if it can be determined that the reasons the government presented to justify shutting down the case were insufficient.

They also plan to call upon the United Nations Committee Against Torture and ask them to review and comment on Canada’s actions regarding this particular case.

This decision has implications far beyond North America, opening the doors for dictators and other leaders to justify illegal, inhumane actions, Gallagher said. “If the U.S. doesn’t have to follow the law,” she posed, “Why should we?”