UNITED NATIONS, Oct 26 2011 (IPS) - Over the past four decades in Latin America and the Caribbean, women have made remarkable strides in education, health, labour, and beyond, with girls now outperforming boys in school, the rate of working women more than doubling in many countries, and female participation rising in politics. 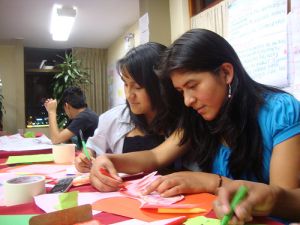 And yet this progress has bred new challenges, ones that have thrust the complexities of balancing jobs, careers and families into the daily lives of many women, says a new World Bank report, “Work and Family: Latin American and Caribbean Women in Search of a New Balance”.

The report, issued Tuesday, demonstrates how improvements in the lives of women, along with a narrowing gender gap in Latin America and the Caribbean, do not necessarily translate into enhanced wellbeing or happiness, and how a new gender reality is setting in.

Greater access to opportunities means women are faced with more complex decisions regarding their careers and their families, especially as women’s education levels rise and some may come to see their work more as a career than as a just a source of income.

The nuances and challenges of balancing the competing demands of careers or work and families must “be brought to the centre stage of policy design”, said the report.

The fact that traditional gender roles define women as primary caretakers in the family further complicates matters. Women comprise the vast majority of the unpaid care economy, yet this work goes unaccounted for from an economic perspective and remains undervalued.

Michelle Bachelet, executive director of U.N. Women who was president of and held two ministerial posts in Chile, spoke at the report’s launching, relating an anecdote of her experiences as a single mother and government minister.

By the time she would arrive to work in the mornings, she had been awake for three hours taking care of her children, while a male colleague would have passed the morning in a considerably less active fashion.

As likely any working mother in any country could attest to, “Striking the right balance between work and family is perhaps one of the most demanding tasks facing women in the developed countries, and a rising challenge in emerging economies,” said the report.

Government leaders and their policies will have to address these new “tensions and challenges for women which, paradoxically, have been made possible by four decades of steady gains”.

Significant progress, yet more to be done

Since 1980, 70 million additional women have entered the workforce in Latin America and the Caribbean, according to the report, which called such growth “unprecedented”.

Furthermore, in the Caribbean, mortality rates have dropped by 40 percent since the 1980s. In the Andean region, they have dropped by 70 percent. Sex imbalances in other parts of the world, including South Asia, Europe and Central America, are the opposite in Latin America and the Caribbean, where females comprise over half of the total population.

These statistics indicate girls’ “wantedness” in the region and reflects increased investment in girls’ and women’s health, said the report.

Overall, the gender gap has been closing in many areas of education, meaning females are outperforming males in school enrolment, achievement and attainment, although indigenous populations are a noticeable exception to this growth, said Augusto de la Torre, chief economist for Latin America and the Caribbean at the World Bank.

Social views of the younger male generation are also shifting, said de la Torre. According to research, younger and better-educated men believe less and less that men make better executives than women do – indications of progress in the parity agenda.

Gender policy, he told those present at the launch, is at a crucial juncture.

Policies that enable “freedom of choice” while “facilitating the quest for balance” are needed, de la Torre said. Empowering women to have outside options also helps improve dynamics inside the household, he added.

Facilitating and coordinating all of these shifts and transformations – politically, socially, culturally, domestically – will be a key challenge for the future, experts agreed.

The report said that new issues point to “the need for a second generation of gender policies”. Or, as Bachelet described, many gaps in gender equality remain; society must consolidate these gains while going well beyond them. These joint goals require new kinds of policies.

The report acknowledged that “no one-size-fits-all policy agenda that is well suited to these changing gender realities” exists. Still, the report is not intended to provide such a solution to countries.

“The report gives general guiding principles for policy,” Laura Chioda, lead author of the report, told IPS. “In this sense it’s less about giving answers in detail and more about fostering a debate that could potentially lead to new policies.”

Gender policies are no longer limited to the realm of gender ministers, she added. Rather, they inform the work of any minister, whether labour, finance, or otherwise. The goal is to bring the relevance of the household perspective to the attention of governments to “stimulate debate about policy”, Chioda said.

Realistically, “it’s never balanced,” Bachelet said of the dynamic between men and women and the work they do. But we need to try to find a “new” or “better” balance, she added wryly.