This story is part two of a three-part series on how social and economic inequalities impact cancer treatment. The third installment examines how Peru's Plan Esperanza is providing comprehensive treatment for cancer patients, especially the poor. 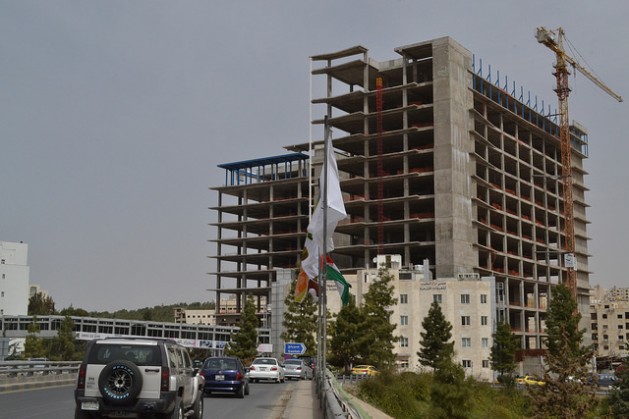 AMMAN, Apr 10 2014 (IPS) - The concrete skeleton of a twin 13-storey complex towers over surrounding buildings on one of Amman’s busiest streets. The ongoing expansion of the King Hussein Cancer Centre symbolises progress as much as it portends a crisis.

After its completion, expected in 2015, the new buildings will more than double the KHCC‘s current capacity, increasing space for new cancer cases from 3,500 per year to 9,000. Yet even this 186-million-dollar project may be insufficient to shoulder Jordan’s growing cancer burden.

"We don't have a single medical oncologist or radio oncologist in the south." -- Dr. Jamal Khader

In Jordan, cancer is the leading cause of death after heart disease. Over 5,000 Jordanians annually are diagnosed with cancer, a figure projected to reach 7,281 by 2020, statistics that reflect global trends.

Cancer was once viewed as a first-world scourge. But in 2008, 56 percent of new cancer cases were in the developing world. And by 2030, the proportion will have climbed to 70 percent.

If Jordan fails to actively prepare for a continuing wave of cancer cases, “we won’t be able to cope with the increased number of patients and the increased cost of treatment,” leading to “less treatment and more mortalities,” Dr. Sami Khatib, a clinical oncologist who is president of the Arab Medical Association Against Cancer and former president of the Jordan Oncology Society, told IPS.

Jordan is fortunate to have the KHCC, a non-governmental organisation run by the King Hussein Cancer Foundation that is the country’s only comprehensive cancer treatment centre and the only cancer treatment facility in the Arab world to receive Joint Commission accreditation.

The KHCC has been a pioneer in cancer treatment in Jordan, transforming the process from disjointed visits with various specialists to comprehensive care with a treatment protocol.

For the half of Jordan’s population residing in Amman or its outskirts, this location is ideal. For residents of remote areas, reaching these facilities can be a major problem.

“Inequality of access is the major obstacle” in providing cancer treatment in a country where “the whole spectrum of cancer treatment is available,” concluded Dr. Omar Nimri, director of the Jordanian Cancer Registry at the Ministry of Health, in the 2014 World Cancer Report.

An island of care

Sitting on a plain bench in a waiting room at the KHCC one morning were Nisreen Harabi and Sana’ Iskafee, two wives of the same husband. Harabi rocked back and forth as if to distract herself from pain while Iskafee spoke.

To reach Amman from their home in the village of Luban one hour away, Iskafee said, the women had to take one or two affordable public buses or spend 15 dinars (21 dollars) on a taxi ride.

Nisreen has cancer in her lymph nodes, according to Sana’, and must go to the KHCC four times a week for radiation therapy.

“We started coming two months ago,” Sana said. “The hardest part for us is the transportation. We live so far away.”

That morning, they had left their home at 6:30 am for a noon appointment, as a variety of factors can often cause delays on public transportation in Jordan.

“The distribution [of cancer treatment facilities] is not fair, as a whole, for Jordan,” Dr. Jamal Khader, a radiation oncologist at the KHCC and president of the Jordan Oncology Society, told IPS.

Like Nisreen, about 60 percent of cancer patients will at some point go through radiology treatment, he pointed out. But they have to be in Amman daily for a 10 to 15-minute session, making for a lot of extra suffering for those living outside the capital.

“We don’t have a single medical oncologist or radio oncologist in the south” or other remote areas, Khader added. “The ideal scenario for a cancer patient is to be treated in a comprehensive centre,” of which the KHCC is the only one. And specialised doctors and technology are primarily available in Amman.

Although all patients across Jordan receive “almost” the same quality treatment, no matter the health care facility they visit, Nimri told IPS in an interview, poorer patients or those who live far from Amman face extra difficulties.

“They have to rent a place, or stay in a hotel, or stay with relatives if they have any,” he said.

In that sense, Harabi is lucky to live one hour away.

Travel and accommodations require time and money, the latter of which is in especially short supply in a country where average annual per capita income is 5,980 dollars. Although societies and charities may help to cover costs, the system that remains in place is a centralised one that does not cater to impoverished patients living far from the capital.

“We need to build facilities…in the north and in the south of Jordan to better cover all the population,” Khatib said. He said the government had “a plan to start building facilities for the treatment of cancer in the different governorates of Jordan” and that “maybe they will start implementing it… soon.”

The situation is changing, albeit gradually. King Abdullah University Hospital in the northern city of Irbid has plans to get radio therapy machines, so that cancer patients residing in northern Jordan would not have to go to Amman for radiation therapy.

A national control plan for cancer is currently being developed as well, with the goal of outlining guidelines for prevention, diagnosis, treatment, and beyond. Khader, the KHCC oncologist, hoped the plan would be finalised within a year and that it could help identify “what facilities are missing here and there.”

Cancer treatment is divided into several sectors, besides the KHCC. Members of the military and security services, and their families, are treated at military facilities; private hospitals are available for those who can afford them; and those who do not qualify or cannot afford to go elsewhere have public facilities run by the Ministry of Health.

Yet their capacity does not match that of the KHCC, with “variable cancer care across facilities,” a 2011 report by the Harvard Global Equity Initiative noted. Of 29 public hospitals, only one offers chemotherapy, it said.

Furthermore, a difference in quality in treatment does exist between public and private facilities, Khatib allowed. As is generally true in most countries, “I think it’s much better in the NGO and private sectors than in the public sector,” he said.

Most cancer patients have their treatment covered by the Ministry of Health or the royal court, Khader noted, since by law, every Jordanian can apply for free treatment. While this policy eases individual suffering, for the government, it will become a financial “crisis to cope with all the commitments,” he added.

Nimri calculated roughly that with 25,000 – 30,000 cancer patients and the average cost of cancer treatment at 20,000 dollars per patient per year, Jordan is spending annually at least half a billion dollars on cancer treatment.

Forty-eight percent of men over the age of 15 in Jordan smoked cigarettes (compared to 5.7 percent of women), according to WHO statistics from 2009, while 63.3 and 70.4 percent of men and women, respectively, had a body mass index (BMI) over 25, or in other words were overweight.

Another 30 percent of cancer deaths are due to behavioural and dietary risks overall, such as having a high body mass index, poor diet, or lack of exercise.

“Our population is growing and aging… without having embraced healthy lifestyles that may help prevent many non-communicable diseases such as cancer,” wrote Dr. Abdallatif Woriekat, then minister of health, in Jordan’s 2010 national report on cancer incidence.

“The unhealthy diet and potentially lethal habit of tobacco use in particular, unfortunately, remains highly common and acceptable among Jordanians, and will undoubtedly leave a large unwanted print with its strong contribution to the increasing incidence of cancer,” he concluded.