This story is the last installment of a three-part series on how social and economic inequalities impact cancer treatment. 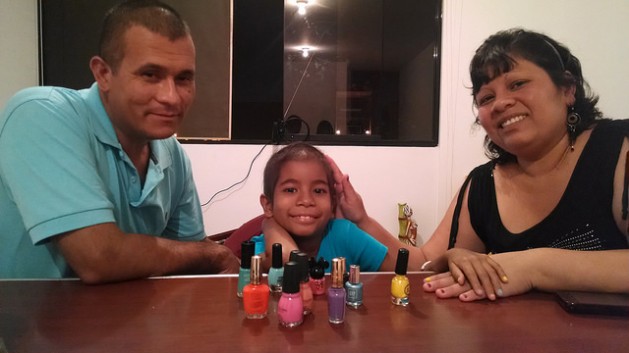 Claudia Alvarado, with her parents and her nail polish, who along with Peru’s Plan Esperanza have helped her to bravely face the treatment for leukaemia. Credit: Milagros Salazar/IPS

LIMA, Apr 10 2014 (IPS) - Her tiny fingers and toes have been painted with different shades of nail polish, the bright colours contrasting sharply with the bleak road she has been on for half her young life.

Since she was three years old, Claudia, who has not yet turned seven, has been fighting leukaemia, with the help of a public health cancer treatment programme in Peru: Plan Esperanza or Plan Hope.

"When you are diagnosed with breast cancer, you immediately think your life is over. But if you find out there is a programme that can help you, you carry on and fight." -- Susana Wong

As in the rest of the Americas, cancer is the second cause of death here, following cardiovascular disease. In this country of 30.5 million people, the annual death toll from cancer is 107 per 100,000 population, and each year 45,000 new cases are diagnosed, according to the Health Ministry.

The ministry estimates that 157 people per 100,000 population suffer from cancer in this South American country.

To bring down these statistics and the high costs of cancer treatment, the Peruvian government launched Plan Esperanza in November 2012. The programme is aimed at improving comprehensive treatment for cancer patients and providing guaranteed oncology services, especially for the poor.

Claudia Alvarado was diagnosed with leukaemia in June 2010. Since then, she has undergone constant lab tests and often painful treatments.

Attending school and having friends have been replaced by long, exhausting trips between hospitals in Lima, the capital, and La Libertad, the northern department where she used to live.

Her hometown is Santa Rosa, a community of rice farmers. Her mother, Ivon Sánchez, told IPS that the one-hour bus ride to the public hospital in the city of Chepén took them through “three ghost towns.”

From Chepén, Claudia was referred to a public hospital in Chiclayo, the capital of another northern department, Lambayeque. And from there she was sent to the National Institute of Neoplastic Disease (INEN) in Lima, another public health institution.

At the institute, she underwent an aggressive treatment programme, which was fully covered by the Intangible Solidarity Fund for Health (FISSAL), which finances care in cases of high-cost health problems like cancer for those affiliated with the national Seguro Integral de Salud (SIS – Comprehensive Health Insurance).

The SIS also provides free healthcare for people in the fourth or fifth income quintiles, such as Claudia’s family.

In January 2012, Claudia suffered a relapse. Her mother remembers that she broke down in grief and anger because she knew the term “relapse” might be a euphemism for a journey with no return.

The only option was a bone marrow transplant. But the tests showed that Claudia’s brother, 12-year-old Renzo, was not compatible as a donor. “We thought it was all over,” Claudia’s mother said.

But in November 2012, the government launched Plan Esperanza, and that year the SIS and FISSAL signed international agreements with two hospitals in the United States to perform bone marrow transplants on children who had not responded well to chemotherapy or who had suffered relapses.

Claudia received the transplant on Sep. 6, 2013 in the Miami Children’s Hospital in the U.S.

The operation took eight hours, followed by 28 days of fever as high as 40 degrees C.

She pulled through and flew back to Lima with her mother in December. Since then she has continued to fight her illness, in the house the family has rented in a poor district in the south of Lima, where IPS visited her.

Her family moved to the capital in order to be together, and her father, Fortunato Alvarado, left his job as a farm labourer and now works as a taxi driver.

As Claudia waits for the 200 critical post-operation days to pass, she has to rest and avoid active play, while staying away from other children to keep from getting sick. Her skinny body weighs just 18 kilos.

She is disciplined about taking her medicine, and eats lemon drops after swallowing the most bitter-tasting pills.

Up to late 2013, Plan Esperanza, whose services are completely free of charge, had benefited 57,531 people, with a total public spending of over 6.4 million dollars. The Plan also includes nationwide campaigns for cancer prevention and diagnosis.

“The important thing is to provide patients with complete treatment, in order to save their lives,” he said.

Of those diagnosed, 75 percent had advanced stage cancer, so the plan began to include home treatments.

Venegas explained that treatment under the Plan is initially reserved for the nearly 13 million affiliates of the SIS.

The most common forms of cancer covered by FISSAL funds are cancer of the cervix, breast, colon, stomach, prostate, leukaemia and lymphoma.

Forms of cancer that are not included in the Plan are still treated free of charge for SIS affiliates.

Treatment in each case costs an average of 260,000 dollars.

Susana Wong, president of the Club de la Mama (Breast Club) at the National Institute of Neoplastic Diseases, has seen hundreds of breast cancer patients who have benefited from Plan Esperanza.

Dr. Miguel Garavito, the head of FISSAL, said the state funding is compensated by the large number of patients – mainly from poor families – and the success of the transplants.

“Peru is one of the few countries in the world that have this kind of free coverage for cancer treatment,” he told IPS.

A more precise register of cancer cases is being drawn up, because currently statistics are only available from the three largest cities: Lima, Arequipa and Trujillo.

Venegas said more staff is needed, as well as training in advances made in cancer treatment, and greater decentralisation so that treatment reaches patients in more remote regions.

A multisectoral commission is being set up to fight cancer on all fronts, including better access to clean water and sanitation.

The link between poor sanitation and cancer is exemplified by the central department of Huánuco, where 70 percent of the people lack potable piped water. Deaths from gastric cancer total 150 per 100,000 population, significantly higher than the national average.

This type of cancer, according to Venegas, is associated with drinking water quality.

As a public health problem, cancer merits a strong response from the state – at least as strong as Claudia has proven herself to be, after spending over half of her life fighting leukaemia, and cheering herself up with her favourite colours of nail polish.