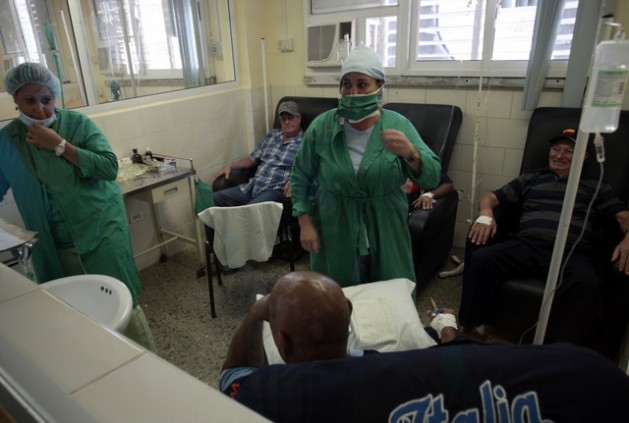 Patients at a chemotherapy session in the Civil Hospital in the province of Cienfuegos, Cuba. Credit: Jorge Luis Baños/IPS

HAVANA, Nov 12 2013 (IPS) - The meagre budgets of Cuban families are put to the test when one of the members is diagnosed with cancer. Although treatment is free of cost, only extended networks of support help alleviate the economic impact of the disease, which is now the number one cause of death.

“The most expensive thing is the diet. We have to buy fruit, vegetables, chicken and fish, which are costly and hard to get,” said Adolfo (not his real name), who changed jobs four times in his efforts to help his wife through her 11-year battle with cancer, which she finally lost in September.

“One day I spent my entire two-week salary on fruit and vegetables. When I reached into my pocket for money to buy meat, it was empty,” the 61-year-old Adolfo told IPS.

In Cuba, health care is free, and surgery, visits to specialists and treatments such as chemotherapy are universally available. However, following a healthy diet while under treatment, paying for transport to healthcare centres and other aspects become a heavy burden for families.

That problem is one of the hidden sides of this disease, which in 2012 caused one out of every four deaths in this country of 11.2 million, surpassing heart disease as the number one cause of death.

Adolfo left his job as a manager at a state company to become a driver at a foreign company with better pay and a more flexible schedule.

He says he was lucky to have that opportunity, an exceptional one for Cubans, who earn the equivalent of 19 dollars on average. Food is expensive, consuming 70 to 90 percent of family income, according to local economists.

“The ration book monthly quota [of food guaranteed at subsidised prices] and the special diet [by prescription] that every patient receives is just a support,” Adolfo explained. “And hiring a carer is almost impossible,” he added.

His family is small, which is common in Cuban society, where the fertility rate is low: 1.69 children per woman.

A study published in April by the British journal The Lancet Oncology, “Planning Cancer Control in Latin America and the Caribbean”, estimated that in 2009 the financial burden of this disease in the region was four billion dollars and rising.

In addition to the direct costs of medical care, the report added indirect costs, such as loss of work days and productivity, among others.

Cancer and other non-transmissible diseases are surpassing infectious diseases in the region as the greatest threat to health, the study reported. However, the general incidence of cancer in Latin America is 163 cases per 100,000 inhabitants – much lower than in the European Union, where it is 264 per 100,000, or the United States, with 400 per 100,000.

Nevertheless, Latin America’s mortality/incidence ratio is 0.59 for all types of cancer, much higher than in the European Union, where it is 0.43, or the United States, with 0.35. In addition, it is estimated that between 2008 and 2020, the number of malignant tumour cases will rise by 42 percent throughout the region.

According to The Lancet, Cuba has the seventh highest incidence of cancer in the region, and a mortality/incidence ratio that is higher than the Latin American average, with 0.63, despite the fact that it is one of the Latin American nations that invests the greatest proportion of its GDP in public health: 9.7 percent.

In this country, which has been in an economic crisis for more than 20 years, solidarity during difficult times is a collective weapon of survival.

“Non-nuclear family members help out financially, because the closest family members have to take care of the patient,” said Odania Hernández, who supports her sister, who underwent surgery for cervical cancer. She lives in a rural town 268 kilometres from Havana, where “the neighbours help out a lot, too,” she told IPS.

People like Hernández who live in more remote areas must travel to Havana to receive specialised care. “We go there every three months and we’re constantly spending money,” said this homemaker, who praised the “excellent quality of medical services” received.

Even friends who live abroad send remittances to help out with her sister’s struggle with cancer, which began in 2011.

“We Cubans have not lost our sensitivity to other people’s pain,” said biologist María Elena Herrera, posting on the Café 108 interactive section of the IPS Cuba website. The Cuban diaspora mobilises immediately when things like this crop up, she added. The United States alone is home to more than 1.8 million people of Cuban origin.

Herrera also emphasised the very traditional local custom of collections, known as “poninas.” Friends and neighbours gather food, money, and hard-to-find items such as syringes and cotton balls to deliver to the patient’s family.

“The pharmaceutical industry contributes to the dietary aspect with natural products that improve the quality of life” of patients, Dr. Niudis Cruz, with the state-run Grupo Empresarial Labiofam, told IPS.

“Avoiding stress and following a healthy lifestyle help prevent malignant tumours,” said Cruz. Labiofam specialises in natural products, including new anti-tumour treatments, in a country that has put a strong emphasis on the biopharmaceutical sector.

One of the principal risk factors found in Cuba is the shift from a traditional diet to “junk food,” and a consequent increase in obesity, which, according to the National Office of Statistics and Information (ONEI), affected 47.6 percent of the population in 2011, compared to 32 percent in 1995.

Tobacco consumption has dropped off in recent years, but its prevalence in 2010 was still at 23.7 percent. In addition, according to ONEI, people are starting to smoke at an earlier age, and last year 9.7 percent of active smokers were adolescents.

Another determining factor is the accelerated aging of the Cuban population. Currently, 18.3 percent of the country’s people are over 60.