BUENOS AIRES, Apr 18 2011 (IPS) - In many cases, cancer is preventable, treatable and curable if detected on time. But the fate of millions of women with the disease varies enormously, depending on where they live. 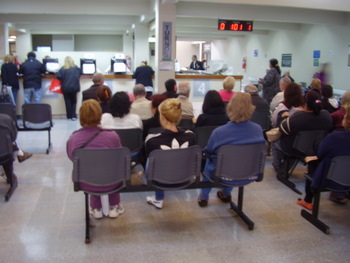 In countries like the United States, Canada, Israel or the nations of the European Union, cervical cancer is almost completely prevented. But in Latin America and the Caribbean, it is the second-most common type of cancer in women, after breast cancer.

This data comes from Globocan 2008, a map that provides the most accurate assessment of the global cancer burden, drawn up by the International Agency for Research on Cancer (IARC) based on information from each country.

The online resource shows that in this region, cervical cancer, which is prevented by regular pap smears, is the most frequent type of cancer in countries with the poorest populations: Bolivia, Guatemala, Honduras, Nicaragua and Peru.

It is also the second-most frequently diagnosed cancer in Argentina, Brazil, Colombia, Costa Rica, Ecuador, Mexico, Paraguay and Venezuela, according to the IARC, which forms part of the World Health Organisation (WHO).

“If you look at a map of the world, breast cancer is predominant in rich countries and cervical cancer in the poorest countries,” Dr. Marcia Moreira, a Brazilian epidemiologist at the Pan American Health Organisation (PAHO), told IPS.

According to PAHO, 40 percent of cancer cases diagnosed in the region could be prevented by regular check-ups and physical exercise, a healthy diet, and avoiding smoking and excessive drinking.

But among poor women, with lower levels of education and less access to information, the main problem is lack of prevention and control, which means women end up in the hospital with abnormal vaginal bleeding and advanced cancer of the cervix.

“Prevention depends a great deal on women’s capacity to negotiate protection (in sexual relations), and on their access to information, health services, early diagnosis and timely treatment,” Moreira said.

She pointed out that the human papillomavirus (HPV), a sexually transmitted disease, is the cause of most cases of cervical cancer. The virus circulates in both rich and poor countries, but it progresses to cancer when women lack access to health services.

“Sometimes they get a pap smear, but they don’t come back, and they aren’t informed of the result even if it’s bad,” Moreira said. “Women tend to be the last ones in the family to take care of themselves, and the health services don’t reach out to them.

“There are women who never have gynaecological exams, or those who, for example, accompany their daughters when they give birth, but the mothers, who are the target for the prevention of this kind of tumour because they are 50 or older, aren’t given a check-up.”

A study carried out in Argentina by Silvina Arrossi, director of the National Programme for the Prevention of Cervical Uterine Cancer, states that this kind of cancer “reflects in all its crudity the inequality in health care.

“Currently, it is considered a disease of poverty. It principally affects women of low socioeconomic level, who are socially vulnerable and do not have access to screening.

“Latin America is one of the regions in the world with the highest rates of this disease, and the relative failure of Latin American countries in preventing and controlling it contrasts with the reduction in the incidence and mortality of this disease in countries like the United States or Canada,” Arrossi wrote.

The differences are not only seen between regions or countries, but also within national borders. In Argentina’s least developed provinces, in the northwest, the cervical cancer rate is nearly four times that of Buenos Aires.

In the last few years, a vaccine has been developed to combat HPV, to be given to girls before they become sexually active. In Argentina it was included in the free vaccination schedule for 10 and 11-year-old girls in high-risk areas.

“In Panama it is massively administered, Costa Rica is considering it, and in Mexico it is being introduced experimentally, but it is a process that will have effects only in the long-term,” Moreira said.

In the meantime, prevention must continue, she stressed. “Girls over 12 who aren’t vaccinated can still contract the virus, and some will later develop precancerous lesions.”

With respect to breast cancer, there is also much to be done. “Until a while ago, people believed it wasn’t curable, but now with the new technologies for early detection, it can be cured if it is diagnosed on time,” Moreira said.

“The timing of detection is crucial to the prognosis,” she underlined. “If a less than two centimetre lesion is found, the prognosis is very favourable, and the possibility of survival is excellent. But the poorest women continue to show up with ulcerated breasts and cancer that has spread to the lungs, bones or brain.”

In 2003, when she was 42, Elena Mosquera was alarmed to see that one of her nipples was bleeding. She had tests done and was diagnosed with cancer. “My mammary ducts were removed, but I was well-informed, and I didn’t lose my breast,” she told IPS.

After her breast surgery, she received lengthy radiation treatment, and took medicine for five years. “In 2008, I was given a clean bill of health, and now I’m doing great, but at the time it was horrible. When they tell you that you have cancer, you get shaken to the roots. You don’t know where to run to,” she said.

Mosquera had access to health coverage, and joined a self-help group run by a local foundation. “You see many cases of women there who postpone doctor’s visits because day-to-day life leads them to prioritise other things, over their health.”

The former patient mentioned the case of one of the members of the group who had a husband and two children, and who after the diagnosis and treatment decided to go back to high school, which she had dropped out of as a teenager.

Experts also point to a kind of cancer whose rate is dropping among men but rising among women, in both developed and developing countries: lung cancer.

“Cigarettes are the big killer, and they are linked to all kinds of cancer, but especially lung cancer. In the past, lung cancer was almost non-existent among women, but now, around three decades after smoking among women became as common as smoking among men, the impact is starting to be seen,” Moreira said.

In Cuba, for example, lung cancer is now the second-most frequent cancer among women after breast cancer, and the top cause of cancer-related deaths among women.

“The incidence among men is dropping, but it is on the rise among women in almost all countries of the region, and it is climbing particularly sharply in countries like Argentina, Chile or Cuba,” she pointed out.

She also noted that girls are smoking much more than boys of the same age. “We have to rescue them, make them see smoking as something negative, because the longer they smoke, the worse the damage will be,” the Brazilian expert said.