Stories written by Milagros Salazar
Milagros Salazar started her career with IPS in June 2006. She specialises in social and environmental conflicts, in particular those relating to the mining, oil and gas industries in Peru. She also writes about the illegal production and trade of cocaine throughout country. Salazar also writes for the political pages of the daily La República, published in Lima. Since 1993, she has been working as an editor and correspondent for several national dailies, including Expreso and El Peruano. Born in Lima in 1976, Salazar holds a bachelor’s degree in social communication from the Universidad Nacional Mayor de San Marcos and a master’s degree in human rights from the Pontificia Universidad Católica de Perú. She has also pursued further study on political governance as part of programmes sponsored by the U.S.-based George Washington University. 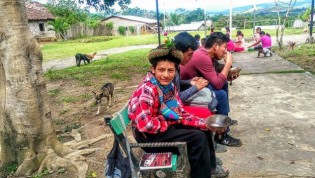 By Milagros Salazar
Undertaking the challenge of pushing for new legislation to guarantee food security in their countries, legislators from Latin America and the Caribbean, together with guest lawmakers from Africa and Asia, will hold the Sixth Forum of the Parliamentary Front Against Hunger Nov. 15-17.

By Milagros Salazar
The leading mining companies in Peru have brought a rash of lawsuits to fight an increase in the tax they pay to cover the costs of inspections and oversight of their potentially environmentally damaging activities.

By Milagros Salazar
The trial of 52 indigenous people that just got underway for a 2009 massacre near the city of Bagua in northwest Peru will test the judicial system’s independence and ability to impart justice.

By Milagros Salazar
Some 40 multicoloured tents were set up to showcase the fruits of community-based rural development projects in the main square of this village in southern Peru during a visit by IFAD president Kanayo Nwanze.

By Milagros Salazar
Some good-byes can actually mean the start of a long road working together. That was how it felt at the end of the World Indigenous Network (WIN) conference in this northern Australian city.
Next Page »
ADVERTISEMENT ADVERTISEMENT