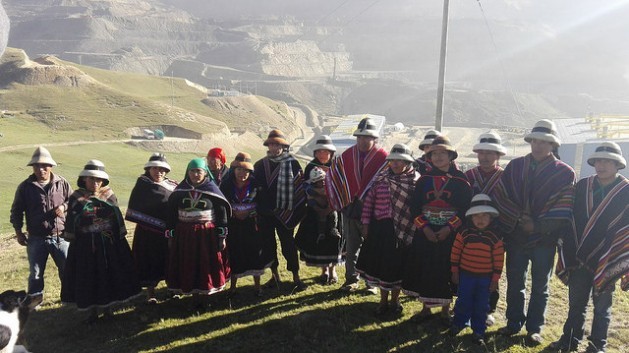 Members of the 16 rural families who refuse to abandon their homes in the village of Taquiruta until the company running the Las Bambas mine compensates them fairly for the loss of their animals, pens and houses. In the background can be seen the biggest mine in Peru. Credit: Milagros Salazar/IPS

LIMA/CHALLHUAHUACHO , Sep 17 2016 (IPS) - Of the 150 socioeconomic conflicts related to the extractive industries that Peru’s new government inherited, one of the highest-profile is the protest by the people living near the biggest mining project in the history of the country: Las Bambas.

The enormous open-pit copper mine in the district of Challhuahuacho, in the southern department of Apurímac, is operated by the Chinese-Australian company MMG Limited, controlled by China Minmetals Corporation, which invested more than 10 billion dollars in its first project in Latin America.

Peru, where mining is the backbone of the economy, is the third-largest copper producer in the world and the fifth-largest gold producer.

Las Bambas, which started operating in January, is projected to have an initial annual production of 400,000 tons of copper concentrate.

The conflict reached its peak in September 2015 when three people were killed and 29 wounded in a clash between local residents and the police. The former government of Ollanta Humala (2011-2016) assembled a working group to address local demands.

“We don’t want conflicts. But if we give you the mine, we have to set conditions,” Daniel Olivera, a local farmer from the community of Ccayao, told IPS with regard to the neglected demands of people living around the mine, which has reserves of 7.2 million metric tons of copper, in addition to molybdenum and other minerals.

The only concrete result achieved so far, according to the representatives of the Quechua communities surrounding the mine, was compensation for the families of the three people killed in the violent clash.

The last session took place Sep. 7-8, but it mainly dealt with technical aspects. The head of the Front for the Defence of the Interests of the Province of Cotatambas, Rodolfo Abarca, told IPS that he expects the next meetings, scheduled for October, to deal with “substantive issues”.

The mine’s three open pits and the processing facilities are located 4,000 metres above sea level in the Andes mountains, between the Cotabambas and Grau provinces in the Apurímac region.

The Front demands that an independent study be carried out in order to shed light on the origins of the conflict: the changes approved by the Ministry of Mines and Energy to the environmental impact assessment of the project, without consulting the local population, in spite of the potential impact on the water sources, soil and air.

The most controversial move was made in 2013 when the authorities allowed the transfer of the plant that separates molybdenum from copper, from Tintaya in the neighboring region of Cuzco, to Fuerabamba, in Cotatambas. 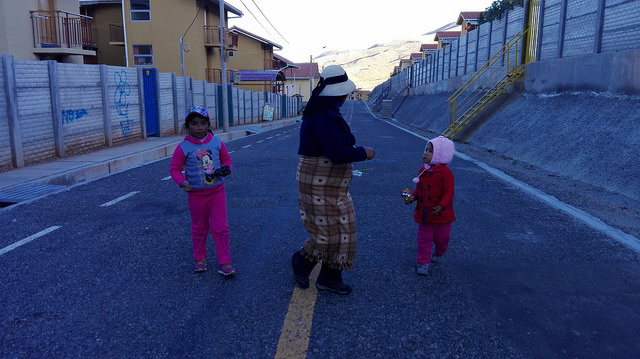 Two girls with their mother on a street of Nueva Fuerabamba, the town where the relocated Quechua villagers were transferred because of the open-pit copper mine in Las Bambas, removed from their traditional way of life, in the department of Apurímac, in the Andean highlands of southern Peru. Credit: Milagros Salazar/IPS

The transfer meant new studies were necessary to measure the potential environmental impacts at the new site. But this step was disregarded in the supporting technical report, according to the environmental engineers who went through the more than 1,500 pages of project records with the team from the investigative journalism site Convoca.

While the Ministry of Mines and Energy and the mining company Las Bambas saw these changes as minor and involving insignificant impacts, the experts said they were significant modifications that required a closer analysis.

The supporting technical report is part of a simplification of requirements carried out by Humala’s government in 2013 through decree 054-2013-PCM, aimed at accelerating private investment in the country.

Among the simplifications was a new rule that the local population no longer has to be consulted before allowing changes in environmental impact studies, on the assumption that these changes only affect secondary components of the project or expansions for technological improvements.

Convoca’s journalists told IPS that the environmental engineers informed them that in the case of Las Bambas, the technical supporting report was used to rapidly justify changes, without having to conduct specific studies to prevent potential environmental impacts, and to avoid consulting local communities.

The technical supporting report also made it possible for the minerals to be transported by truck, instead of only through pipelines as in the past. As a result, the trucks have been throwing up clouds of dust since January, a problem that has further fuelled the local protests.

The company told Convoca via email that they use “sealed containers” and that they spray the roads with water before the trucks drive by.

With the removal of the requirement for pipelines went the hopes of people in the 20 farming communities and four small towns in four different districts, who expected to lease or sell the lands crossed by the pipelines that were projected in the initial environmental impact assessment.

The decision “hit us like a bucket of cold water… It’s very sad,” added Olivera, who is from a community where the pipelines were supposed to cross.

The environmental engineers argued that what should have been done was a study of the environmental impact caused by the transport of minerals by truck instead of through a pipeline.

They also said a health impact assessment was needed after the relocation of the filtration plant, “since besides copper, molybdenum is also processed and produced, which is harmful to human health,” causing liver failure and different types of arthritis.

The Ministry of Mines and Energy said by email that the relocation of “the molybdenum plant, as well as the filtration area and the concentrate storage facility,” only required a technical supporting report because the management plan approved for the plant was not modified.

Moreover, they said the area of influence of the project was reduced, and argued that a plan approved to recirculate the mining process water was an “improvement.”

The company said that before submitting their report, it “identified and evaluated the impacts that would be generated in each case,” and concluded that “they would not be significant.”

In his inaugural address, President Kuczynski said he would demand compliance with all environmental regulations and would respect the views of every citizen regarding a project’s environmental impact.

But the former vice minister of environmental management, José de Echave, pointed out to IPS that “there is no mechanism for public participation,” even when local residents are not opposed to a project.

According to the ombudsperson’s office there are 221 unresolved social conflicts in Peru, 150 (71 percent) of which are centered on territories where extractive projects are being carried out and have an environmental component.

De Echave said the government should create strategies to monitor social conflicts and deal with them through dialogue with government agencies.

Access to land is another issue behind the social conflict in Las Bambas.

There are 16 families in the village of Taquiruta, on the edge of the town of Fuerabamba, who live very close to the centre of operations of Las Bambas and refuse to leave their homes and parcels of land until the company provides them with fair compensation. The minerals are under the ground where their houses sit.

They are the only ones that until now have not left. Over the last two years, more than 400 families have been relocated to a new settlement, half an hour away from the community, named Nueva Fuerabamba (new Fuerabamba).

De Echave said the government should implement a land-use planning law to anticipate potential conflicts over access to natural resources.

With reporting by Alicia Tovar (Lima).