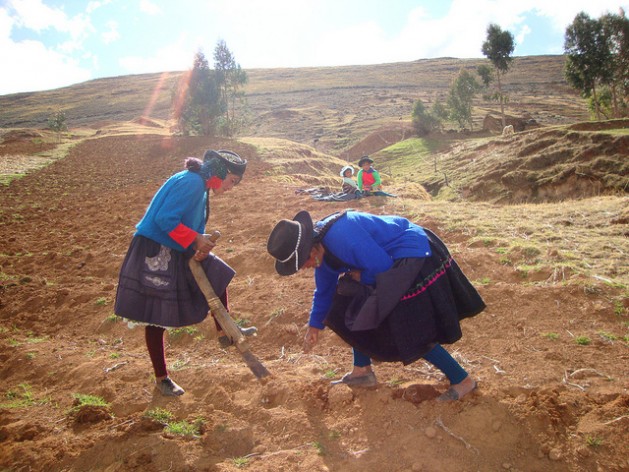 Peasant women working on the family plot of land near the village of Padre Rumi in the Andes highlands department of Huancavelica in Peru. Credit: Milagros Salazar/IPS

LIMA, Jan 9 2014 (IPS) - A new institution set up in Peru will strengthen small-scale organic farming, providing support to some 43,000 exporters of ecological products and another 350,000 who supply the domestic market with environmentally-friendly products.

The National Council for Organic Products (CONAPO) was formed to support the weakest link in the food chain, small-scale agriculture, the very year that the United Nations dedicated to family farming worldwide because of its social and productive importance.

“There is no public spending that puts the priority on small-scale farmers,” Moisés Quispe, a Peruvian farmer, told IPS. “The budget for agriculture is reduced year by year, even though over 70 percent of the food that Peruvians consume comes from small farms.”

According to the last agricultural census, carried out in 2012, 72 percent of farms in this Andean country are smaller than six hectares, and they mainly supply the domestic market.

Quispe is executive director of the National Association of Ecological Producers of Peru (ANPE), which groups 21,000 organic farmers, 60 percent of whom are smallholders.

For the members of ANPE, the new council represents an opportunity to reach agreements with the state that were never possible before, said Quispe, who has been farming for four decades in the southern department or region of Cuzco.

Agriculture represents 25 percent of all jobs in Peru, around 7.5 percent of GDP and nine percent of exports, according to official figures.

The technical secretary of CONAPO, José Muro, told IPS that Jan. 24 is the date set for the first meeting of its members, who include representatives of key sectors of the executive branch, the regional organic production councils and civil society.

According to the law for the promotion of organic and ecological production, in effect since 2008, regional and local governments are to put a priority on providing support for organic agriculture in their plans, programmes and projects.

The law also requires Peru’s agriculture development bank, Agrobanco, to grant loans to certified farmers during the period of conversion to organic production. In addition, the government must provide incentives to promote the production and commercialisation of organic products.

“Organic production is extremely important for Peru,” Agriculture Minister Milton von Hesse said at the installation of CONAPO on Dec. 22.

Von Hesse stressed that the council recognised “the key role that small farmers play in rural development” – one of the arguments cited by the United Nations for naming 2014 the International Year of Family Farming.

Quispe said full enforcement of the 2008 law is urgently needed, in order to expand agricultural frontiers for small farmers, who face challenges from all sides: lack of access to credit; water scarcity; low prices due to dependence on middlemen; and a lack of state investment in infrastructure.

Muro said the Agriculture Ministry has made progress in support policies, thanks to which exports of organic products, principally cocoa, bananas and coffee, have surpassed 350 million dollars a year.

Some 43,000 small farmers are registered with Peru’s agricultural health service, SENASA. But that number only includes farmers who are certified to export their products.

The head of the Organic Agriculture Network (RAE), Alejandra Farfán, told IPS that there is another large segment of farmers who supply the domestic market, estimated at around 350,000. “We don’t have official figures, but the challenge is to see how to bring them visibility through the Council, so they can also benefit,” she said.

Farfán described the creation of CONAPO as a “milestone,” after years of waiting.

She is a representative of civil society on the council, and also presides over the Peruvian Agroecological Consortium.

“We know that small farmers are steeped in poverty,” she told IPS. “So the hope is that in 2014 they will be included on the agenda of policies for productive infrastructure.”

She said it was necessary to incorporate them in existing government agriculture programmes, and to bolster organic production, with an emphasis on the poorest rural families.

Because of the lack of support, campesinos or peasant farmers have been abandoning their small plots of land to find seasonal or temporary work, in order to feed and clothe their families, Quispe said.

Rural migration to mining areas is one of the most visible and painful consequences of the lack of attention to small farmers, he said.

But even those who are exclusively dedicated to producing and exporting organic products year-round face a major challenge: commercialisation.

On average, 30 percent of the organic coffee produced in the country is sold as regular beans due to the lack of markets, said Miguel Paz, sales manager for the Central Association of Farmers from Pichanaki, in the Amazon jungle department of Junín in central Peru.

Farmers in the valleys of Junín produce 25 percent of the coffee consumed in the country, Paz told IPS.

In his view, it is time to look for new markets and turn to other countries, like Japan or Australia. Today, exports of Peru’s organic coffee mainly go to Germany and the United States.

“The government should make headway into new markets for organic products by means of different strategies, ranging from printing a good pamphlet in several languages to encouraging and teaching producers to participate in business rounds, to learn who’s who,” said Paz, who has taken part in several international negotiations.

In February he will travel to Germany, Belgium and France along with representatives of a dozen cooperatives from different parts of the country.

The task of opening up new markets falls to the Ministry of Foreign Trade and Tourism, which is also represented in CONAPO, along with the Ministry of Production and the National Institute for the Defence of Competition and Intellectual Property.

Farfán said the Environment Ministry should also be included, because climate change has a huge impact on organic production.

The new council will now draw up a National Plan for Organic Production, internal rules for the plan, and regulations for the regional councils. Based on that, the government is to earmark the necessary budget funds to carry out the plans.

“The idea is to guarantee that the population has healthy food. Clean agriculture won’t only benefit the people of Peru, but humanity as a whole,” Quispe said with conviction.