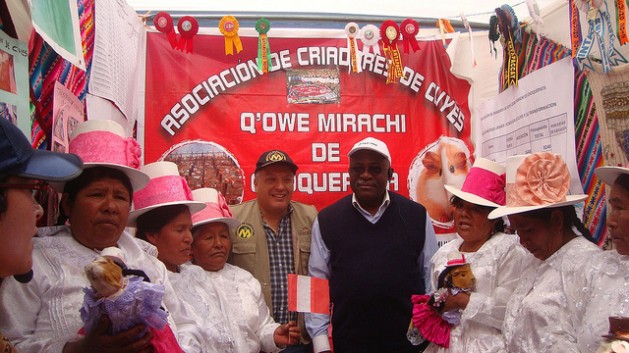 QUEQUEÑA, Peru , Aug 7 2013 (IPS) - Some 40 multicoloured tents were set up to showcase the fruits of community-based rural development projects in the main square of this village in southern Peru during a visit by IFAD president Kanayo Nwanze.

The event organised in this highlands community in the southern Peruvian department of Arequipa showed the fruits of 20 years of collaboration between the specialised United Nations agency and this South American country.

On his first trip to Peru, the Nigerian expert who heads IFAD (International Fund for Agricultural Development) visited Quequeña on Aug. 3, where products made by community projects in Arequipa and the neighbouring southern departments of Moquegua, Cuzco and Puno were displayed.

“It’s not strange that Peru has been the laboratory where we decided to launch these initiatives,” Josefina Stubbs, director of IFAD’s Latin America and Caribbean Division, told IPS.

Stubbs, who accompanied Nwanze, said the Local Resource Allocation Committees (LRACs) developed in southern Peru have drawn attention from other countries, like Vietnam, Cambodia and Indonesia.

Peruvian technical experts involved in the project will soon travel to China to share their experiences, which are focused on meeting needs in communities based on the transparent community management of resources, said Stubbs.

The funds IFAD provides the Peruvian government are transferred to the communities’ own bank accounts, explained the expert from the Dominican Republic.

The project in southern Peru is the oldest of the three that the government is carrying out in rural areas with loans and technical advice from IFAD.

Here in Arequipa, the communities design and implement their own productive initiatives, which help generate income to cover their basic needs. Crop improvement, guinea pig and livestock raising, weaving and gastronomic undertakings using local products are some of the projects.

“IFAD supports the government’s efforts to enable people to produce enough to have access to buy something to feed themselves,” Nwanze told IPS.

On Sunday, the head of IFAD visited the highland villages of Sibayo and Callalli, which are also in Arequipa, before returning to Lima on Monday and flying from there to Colombia, where similar projects are being carried out.

Every three years, IFAD distributes some 300 to 400 million dollars in loans for agricultural and rural development in Latin America, where it supports a range of projects in nearly every country in the region.

Nwanze added that the next step for Peru would be to strengthen the decentralisation of the management of the projects so the “regional authorities take responsibility for the programme and the financing.” He mentioned the progress IFAD has made along those lines in Argentina and Brazil.

Stubbs said the idea was for more villages and towns to adopt this kind of initiative. With that aim, IFAD authorities met Saturday morning with the governor of Arequipa, Juan Manuel Guillén. A working group will now be created to launch this new stage, she said.

For his part, Peru’s minister of agriculture, Milton von Hesse, praised IFAD for seeing campesinos as “the most qualified to decide what kind of technical assistance they need” and for fomenting connections between markets.

The important thing is that the products made by local campesinos make it outside their communities, and even outside the country, he said.

“It has been 20 years of continuous learning; we have also made mistakes,” he told IPS. “But what is important is that successful experiences have been incorporated in our public policies, and we will continue doing that with all of the lessons that are learned.”

In middle-income countries like Peru, IFAD continues to grant loans, but it especially provides technical assistance because, as Stubbs said, “macroeconomic stability will not by itself bring development.

“For the first time, I have the privilege to see that all of the governments, of whatever political stripe, have really understood that closing the inequality gap is in everyone’s interest,” she said.

Juan Moreno, programme manager for IFAD’s Latin America and Caribbean Division, informed IPS that the agency only has an allotment of 25 million dollars for working with Peru through 2015.

To illustrate, she mentioned the case of Argentina, which two years ago launched a 150 million dollar project, of which IFAD only supplied seven million dollars. Most of the funds came from the government itself.

In the midst of regional economic growth based in large part on the extractive industries, Stubbs said governments and civil society should exercise more oversight of the activities of mining and other industries, to preserve water sources and land, which poor rural populations depend on for subsistence.

She said every country should undertake its own kind of development, depending on its ecosystem.

Nwanze, meanwhile, said governments should invest in infrastructure like roads to generate new opportunities for local development. He added that in rural areas, “when particularly women have access to economic empowerment, the community starts to change.”

He said it is difficult to say, in a few words, how to fight poverty. But he added that access to basic services is key to working with the most disadvantaged communities from a human rights perspective.

“For me, human rights are basically in everything, it is not only a question of people having freedom of speech,” the Nigerian expert said before heading to his next destination.