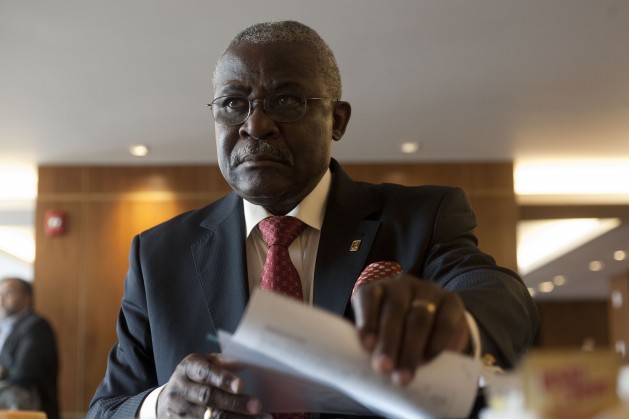 IFAD president Kanayo Nwanze, interviewed by IPS at the end of his Aug. 2-8, 2013 visit to Peru and Colombia. Credit: Juan Manuel Barrero/IPS

BOGOTA, Aug 12 2013 (IPS) - “There is no development without peace. It should be understood that, for there to be development in a country, there must be an internal peace process,” says Kanayo Nwanze, president of the International Fund for Agricultural Development (IFAD).

With respect to Colombia, the Nigerian expert in agricultural development said: “We have to create a platform of trust” in abandoned rural communities.

IFAD is the only United Nations agency created to provide financial support to peasants and smallholder farmers. It works with governments, but in bottom-to-top projects. Organised groups of people propose their own initiatives which compete for funding, through the Agriculture Ministry in the case of Colombia.

The funds are managed by the communities themselves. More than 1,700 projects presented by Colombian rural groups obtained support that way through the IFAD-Rural Opportunities project that began in 2007 and is now coming to an end.

IFAD is now launching a new programme in Colombia through the Agriculture Ministry, which will act in war zones, termed “territorial consolidation areas” by the government – a controversial concept involving both questions of security and development.

“IFAD is not a top-down institution, it is bottom-up. You walk with the communities. They have to be part of the project. They have to own it.” -- Kanayo Nwanze

“Small and medium enterprises in rural areas are a source of generating social stability in countries,” Nwanze says in this interview with IPS in Bogotá at the end of his Aug. 2-8 visit to Peru and Colombia.

Nwanze met with the presidents of both countries – Ollanta Humala of Peru and Juan Manuel Santos of Colombia – and visited rural communities.

Q: IFAD has wide experience working in conflict zones to bring development and to help to build peace. How can this experience be applied in Colombia?

A: We have found in many parts of Africa and Asia – India is a very good example – where, if there is ability to organise rural populations, women and men and children, and give them opportunities to have gainful employment…youth in particular are less likely to be attracted by rhetoric and extremism.

Just a few days ago we launched a new programme called TOP (Trust & Opportunities Project), which takes the first project into a different dimension, a much higher dimension.

Q: Most of the places where the new project will be deployed in Colombia are still war zones. What kind of concrete difficulties could that pose?

A: I can talk from our experiences elsewhere. A good example is…projects involving community development and natural resource management in communities of the northeastern states of India.

The primary impact of that project was not only community development and management of natural resources, but [the fact that] it generated such economic benefits that young people who formally were engaged in extremism now had jobs, and it reduced the rate of insurgency.

You see, IFAD is a unique institution. Apart from being a specialised U.N. agency, which gives us…global legitimacy and trust by populations and governments, [we have] the ability to organise rural populations, so that they have…their own structural governance platform to operate.

You need a mechanism where you can build trust, between the populations in the war zone and the governments. And this is what IFAD is fantastic at doing. We trust and we are trusted by the communities; they see us as their friends. The governments we work with – in Colombia [for instance] – see us as very apolitical [and that] our interests are basically for the populations and for the national policy dialogue.

The difficulties that people often face in these communities is the way…an idea or a concept [is presented to them] – you have to avoid just parachuting in and telling them ‘this is what you have to do’.

IFAD is not a top-down institution, it is bottom-up. You walk with the communities. They have to be part of the project. They have to own it. And that way they are committed to it; when they own it they want it to succeed; if it is parachuted from the top, they reject it.

And there is no other institution that I know of within the U.N. system or within the international financial institutions that goes to the remotest and most difficult areas in the countries. IFAD does.

Q: Is the new TOP in line with Colombia´s policies?

Now, President Santos’ major priority today is peace and inclusive development. So what do we do? We say OK.

We have allocated 25 million dollars. That is nothing for Colombia. But what we bring is knowledge and experience on how we work with rural populations. So, we are a facilitator…[and] our programmes are defined by the strategy and the priority of the governments for its people.

Our programmes are not political. But the outputs, the results can have political impact, because they bring about political stability and trust in the community, which is the foundation for peace.

In Latin America – in Brazil, Peru or Guatemala – or in different countries in Africa or Asia, when you go to the community, you see the commitment and the excitement they have, for the simple fact that they are now doing dignified activities that are generating money.

Do you think that they want to take up arms against the government? No. That is so fundamental.

Q: What general impression did you get from your trip to Peru and Colombia?

A: In both countries I was impressed. In Peru, because of the president’s commitment to agriculture and rural development. I’m also impressed with the emphasis that is given to creating peace through investment in development, in both countries.

Unless we have stable and vibrant rural communities, we cannot achieve sustainable development in any country, because you always have this gap between those who have and those who have not. And when the gap gets to [a certain] point, it’s like a string that snaps. And when it snaps, you have political crisis.