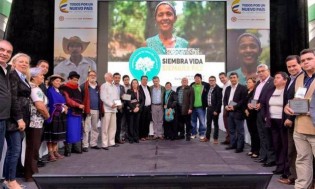 By Camilo Segura Álvarez
During the closing session of the Social Forum of the Sixth Summit of the Americas, the broadcast signal was cut off, triggering protests from participating indigenous leaders. But that did not stop the voice of Abya Yala - the ancestral name of the continent - from being heard.

By Constanza Vieira
In preparation for the Sixth Summit of the Americas, the gathering’s Social Forum has held 25 meetings since September, as well as dozens of online working sessions, with the participation of some 7,000 people.

By IPS Correspondents
A thick fog flows over the eastern range of the Colombian Andes. Here and there, the constant wind lifts the clouds to reveal lagoons, cloud forests, and páramo, an Andean alpine ecosystem known as a "mountaintop sponge" for its massive water-holding capacity.

By Constanza Vieira
The dismissal of charges in Colombia against Swiss mediator Jean-Pierre Gontard, who helped negotiate the release of numerous hostages held by guerrillas in this country between 1998 and 2008, is "magnificent news, for bilateral relations as well as at a purely human level," Colombia’s ambassador to Switzerland, Claudia Turbay, told IPS.

By Helda Martínez
"In the Andes, and all over the world, mining on mountains should be banned. Distinguished scientists and papers in the most prestigious journals are saying this," a regional planning expert in Colombia told IPS.
ADVERTISEMENT ADVERTISEMENT