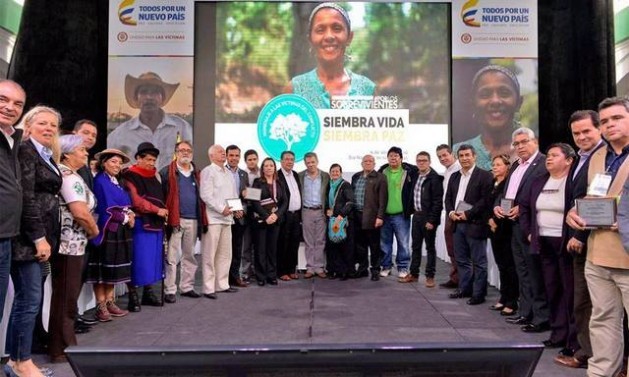 Social actors and government representatives sign a social and political pact for reparations and peace in Colombia on Apr. 11, the National Day of Remembrance and Solidarity with the Victims of the Conflict. Credit: UARIV

BOGOTA, May 16 2016 (IPS) - “If you’re going to talk about Colombia and the peace process, do it somewhere else,” was heard at a regional preparatory meeting for the World Humanitarian Summit, according to Ramón Rodríguez, with the Colombian government’s Unit for Attention and Integral Reparation for Victims (UARIV).

“Cuba’s representative, for example, stated: ‘This is a World Humanitarian Summit, we’re going to talk about humanitarian questions in general, and not specific cases,” the official said with respect to the preparations for the first gathering of its kind, to be held May 23-24 in Istanbul.

“For the organisers of the World Humanitarian Summit, disasters are the main issue. They practically fobbed us off,” added Rodríguez, UARIV’s director of social and humanitarian questions, in an interview with IPS in his Bogotá office.

This is true even though United Nations Secretary-General Ban Ki-moon, when he called the summit, declared that “We must ensure no-one in conflict, no-one in chronic poverty, and no-one living with the risk of natural hazards and rising sea levels is left behind.”

"Truth is the true reparations”

On May 11, journalist Jineth Bedoya refused an indemnification payment of 8,250 dollars, which she had originally accepted two years ago when the government established May 25 as the National Day for Dignity for Women Victims of Sexual Violence. May 25 was the day she was kidnapped and raped by paramilitaries because of her reporting work, in 2000.

“Truth is the true reparations,” Bedoya said in a press conference. El Tiempo, the newspaper where she works, wrote “The state claims its agents did not participate in what happened, even though there is proof that state agents took part in the kidnapping, torture and sexual violence against the reporter.” The Freedom of the Press Foundation hopes the IACHR will refer Bedoya’s case to the Inter-American Court on Human Rights.

In any case, “the issue (of the Colombian armed conflict) draws a lot of attention, although it is very limited,” said Rodríguez, an industrial engineer who organised and directs the world’s biggest humanitarian aid logistics system, in terms of percentage of a national budget that goes to citizens of the country itself.

Colombia is the only country in Latin America and the Caribbean where a humanitarian crisis has been declared due to internal armed conflict.

In nearly seventy years of civil war in different shapes and formats, the counting of and attention to victims has undergone major changes. Today there is basically industrial-level aid, adapted to a lengthy, calculated disaster.

“We, the government, are the main humanitarian actor in Colombia,” said Rodríguez. “We have an emergency response team. We work with humanitarian organisations through local humanitarian teams.”

The victims of forced displacement began to be counted in 1985 by the Catholic Church, at the time the only non-governmental institution with the capacity to carry out a national census of displaced persons.

But it was a 2004 Constitutional Court sentence that ordered the government to – gradually – acknowledge the real number of displaced persons, thus recognising the effects of the war.

The Court has been able to verify compliance with the ruling thanks to the support of a non-governmental alliance of academics and researchers: the Follow-up Commission on Public Policies on Forced Displacement.

Finally, in 2011, on the initiative of the government of current President Juan Manuel Santos, whose term began in 2010, the Victims and Land Restitution Law was approved. Among the many measures it involved, it created the UARIV.

At the time, the government recognised 4.5 million people affected by the war in a country of 48 million.

Apart from the debate on whether the victims were undercounted, or the number of victims grew, or what grew was the number counted by the state, today UARIV knows that 84.2 percent of the registered victims are displaced persons, and that 45.4 percent come from the geostrategic, resource-rich and dynamic department of Antioquia in northwest Colombia.

It also reports that when the threats peak, this coincides with a peak in forced displacement of people from their land, which intensified between 1995 and 2007, while kidnappings (which account for 0.5 percent of victims) peaked in 2002 and are now becoming a thing of the past.

In addition, the unit reports that among the victims there are slightly more women than men, while children are the single largest group. And it says one-fourth of the victims are black or indigenous people.

Rodríguez has kept up his monitoring as the peace talks with the Revolutionary Armed Forces of Colombia (FARC) guerrillas continue in Havana.

The increase is attributed to criminal bands made up of former far-right paramilitaries, and to the National Liberation Army (ELN), a smaller left-wing rebel group, with which the government recently announced the start of talks.

Colombia is now on the verge of a peace deal. But Rodríguez said it will take “three to five years to achieve peace. There will be an upsurge in violence,” not only because of former paramilitaries but also guerrillas who refuse to lay down their arms.

“Something that should be shown at the World Humanitarian Summit is the rise in violence that is going to occur when the peace agreement is signed. The question of control territory is of great importance to the armed actors, and converges with economic aspects,” said the official.

For Rodríguez, the “victim response, assistance and reparations model” that Colombia has come up with is another key element that would be useful to share at the Istanbul summit.

The model has two phases. The first, immediate humanitarian aid, operates within 48 hours after acts of violence, and comes in two forms: funds, through the municipalities, and in kind, through operators who are subcontracted, who were paid a combined total of more than five million dollars in 2015 for providing services.

Several months later, the victims are registered in the Single Registry of Victims, and emergency and transition aid (for housing and food) begins. The last phase is reparations, which includes indemnification of different kinds.