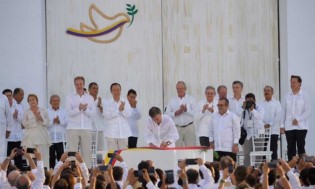 By Humberto Márquez
“All of the countries of the Amazon basin say they want to protect the environment, but they all have agreements with transnational corporations for the construction of roads or for mining and exploitation of forests,” Curripaco indigenous leader Gregorio Díaz Mirabal, from the south of Venezuela, told Tierramérica.*
ADVERTISEMENT ADVERTISEMENT