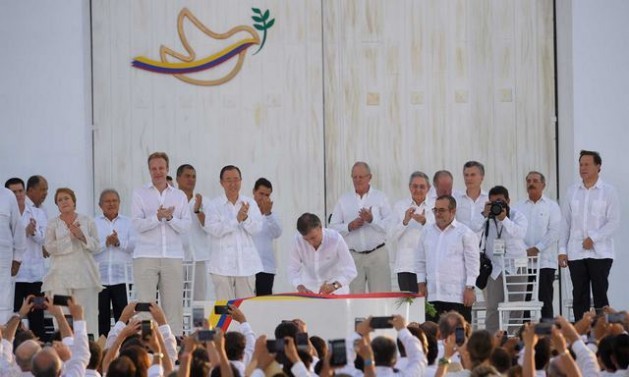 BOGOTA, Sep 27 2016 (IPS) - It was like a huge party in Colombia. “Congratulations!” people said to each other, before hugging. “Only 20 minutes to go!” one office worker said, hurrying on her way to Bolívar square, in the heart of Bogotá. And everyone knew what she was talking about, and hurried along too. Complete strangers exchanged winks of complicity.

Starting at 5:00 PM on Monday Sept. 26, the people in the square watched a live broadcast of the ceremony in Cartagena de Indias, 664 km to the north, where the government and the Revolutionary Armed Forces of Colombia (FARC) rebels signed a peace agreement, putting an end to 52 years of armed conflict.

The first big test for peace will come on Sunday Oct. 2, when Colombians will vote for or against the peace deal, in a referendum.

The ceremony began with one minute of silence for the Colombians who were killed or forcibly disappeared in the last half century, while dozens of white flags were raised.

This was followed by an a capella song by traditional singers from Bojayá, a town in the northwestern department of Chocó where 79 people were killed in May 2002, including 44 children. The United Nations blamed the FARC, the far-right paramilitaries and the army for the war crime.

“We are very happy/full of joy/that the FARC guerrillas/are laying down their arms,” they sang. During the war, “in our community/they didn’t even let/us go out to fish or work. We want justice and peace/to come from the heart/for health, peace and education to reach our fields.”

At 5:30 PM, President Juan Manuel Santos and FARC leader Rodrigo Londoño, known by his nom de guerre Timochenko, signed the “final agreement to end the conflict and build a stable and lasting peace”, agreed on Aug. 24 in Havana after five years of peace talks held with international observers.

Colombians are “bidding farewell to decades of flames and sending up a bright flare of hope that illuminates the world,” Ban Ki-moon said.

The two leaders signing the accord spoke next.

The former rebel leader apologised “to all the victims of the conflict for all of the pain that we have caused in this war,” receiving a standing ovation in Cartagena as well as Bogotá, while thousands of people chanted “Yes we could!” 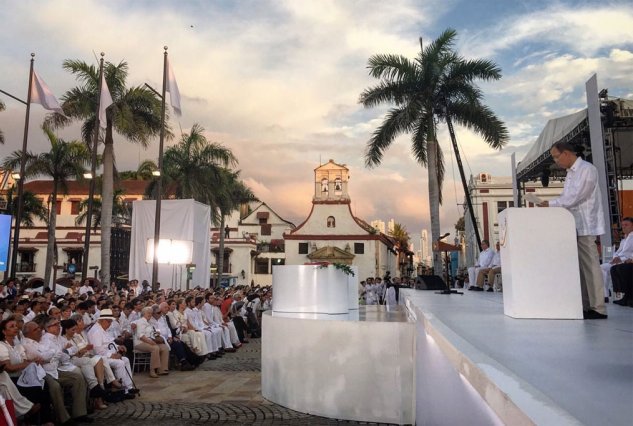 U.N. Secretary General Ban Ki-moon speaks at the ceremony for the signing of the peace deal in Cartagena de Indias, Colombia. Credit: UN

The FARC rebel organisation will now become a new political party. ““No one should doubt that we are moving into politics without arms,” Londoño said. “The war is over. We are starting to build peace.”

Santos said “I welcome you to democracy. Exchanging bullets for votes, weapons for ideas, is the bravest and most intelligent decision…you understood the call of history.”

“We will undoubtedly never see eye to eye about the political or economic model that our country should follow, but I will staunchly defend your right to express your ideas within the democratic regime,” the president said.

After 14 years, the European Union removed the FARC from its list of terrorist organisations. And U.S. Secretary of State John Kerry said his government would “review” doing the same.

Ban confirmed that the signing of the agreement marked the start of the U.N. Security Council peacekeeping mission to verify and monitor the ceasefire and the laying down of arms within 180 days.

On the sunny afternoon in Bolívar square, 70-something Graciela Laverde, wearing a colourful cotton dress, told IPS her biggest wish was “peace, education and recreation for so many children, an end to all the corruption and the killing of so many innocent people….If God wills, there will be peace.”

The first big step along the complex route to consolidating peace will be the Oct. 2 referendum in which Colombians will vote whether or not they back the final peace deal.

The campaigns urging people to vote “yes” have been diverse and have included initiatives too numerous to count. For example, grandmothers playing with their grandchildren cut out large signs reading “si” (yes) to tape in their windows.

The campaign for the “no” vote, meanwhile, was led first and foremost by the far right: former president Álvaro Uribe (2002-2010) and former attorney general Alejandro Ordóñez, who may be Uribe’s candidate in the 2018 presidential elections.

The campaign has targeted Colombians in urban areas, who make up 70 percent of the population. “The people living in rural areas are prepared to vote ‘yes’,” analyst Jesús Aníbal Suárez told IPS, adding that it was urban residents who had the most doubts.

Suárez expects low voter turnout of around 35 percent, which would still be high enough to meet the legal requirements for the referendum. He projects a 60-40 percent result in favour of “yes”. 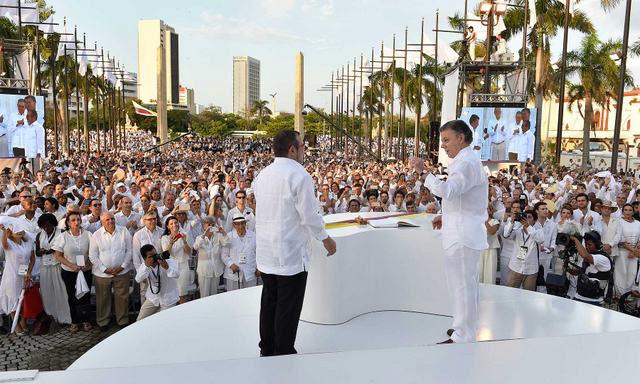 President Juan Manuel Santos (R) shows FARC chief Rodrigo Londoño the symbolic pen made from a bullet that the two used to sign the peace agreement putting an end to over half a century of conflict in Colombia. Credit: Colombian presidency

“There is a great deal of uncertainty, and that leads people to abstain from voting,” he said. “Uribe’s effort has made its mark, it has managed to confuse people,” by widely disseminating false information about the peace agreement, he added.

But there is a new segment of the population in favour of the “yes” vote: the military and police, who total nearly half a million people in this country of 48 million.

“The members of the military can’t vote, but their families, the people around them, can,” said Suárez. “I heard retired general (former police chief) Roso José Serrano say: ‘I don’t want one more police officer to die.”

“Soldiers and police officers feel like they have been cannon fodder. Their families will vote for the ceasefire, just as a matter of logic,” because the deaths in combat have been reduced to zero.

During the 2014 presidential elections voters were polarised between reelecting Santos, so he could continue the peace talks with the FARC, and voting for Uribe’s candidate Óscar Zuluaga, who wanted to suspend the negotiations and relaunch them on a different footing.

Today, the “no” camp is calling for a renegotiation of the accord.

Suárez believes that in 2014, the families and friends of the half million soldiers and police voted for Zuluaga, but will now vote “yes”.

At the same time, the “no” campaign has complained about the government’s new sex education for preteens.

Because the peace agreement has a gender perspective, an unprecedented aspect in any peace deal anywhere in the world, Ordóñez’s followers protested on the day of the signing ceremony, in a small demonstration in Cartagena, that the peace accord represented a threat to children because of its “gender ideology.”

Evangelical Christians, who number several million in Colombia, vote in a disciplined manner, and their preachers have told them to vote “no”. The local Catholic Church leaders, despite Pope Francis’ support for the peace talks, declared themselves neutral with regard to the referendum.

“The referendum will define which direction this will take,” said Carlos Lozano, director of the Communist weekly publication Voz, who was close to the Havana talks.

“If the ‘no’ vote wins, which I don’t believe will happen, things would change a great deal, even if the war didn’t break out again,” he told IPS.

“It would be very difficult to hold another process of peace talks and reach another agreement,” he said. “It’s a document that has consensus support, which is worthy of the state, worthy of the guerrillas, and was built with great care, in a very detailed manner.”