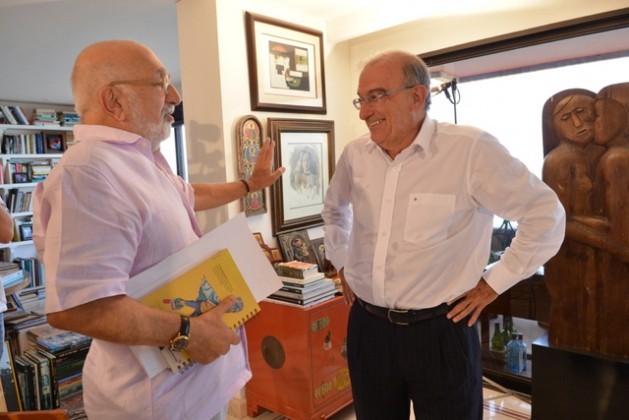 BOGOTÁ, Jul 7 2015 (IPS) - There is a growing sensation in Colombia that the peace talks with the FARC guerrillas are “about to come to an end” – in success or failure, according to the government’s chief negotiator, Humberto de la Calle.

In his apartment overlooking the sea in the Caribbean coastal city of Cartagena de Indias, former vice president De la Calle (1994-1996) was interviewed by veteran Colombian journalist Juan Gossaín. The two used to work together on the morning news and talk programme of the RCN Radio station, which Gossaín headed for 26 years, until 2010.

The interview was more like a friendly conversation, without a question and answer format. It was distributed by the Office of the High Commissioner for Peace to be published Sunday Jul. 5.

The chief negotiator, generally reluctant to talk to the media, warned that the government might walk away from the talks: “I want to tell the FARC (Revolutionary Armed Forces of Colombia) in all seriousness, this could end. It is likely that one day they won’t find us at the negotiating table in Havana’.”

“The patience of Colombians is running out. The risk is real,” said De la Calle, although he also stated that the process could end “because we reach an agreement, since in this final stretch we are dealing with important underlying issues.”

As De la Calle said, “although it seems like a paradox, the peace process has received more support from outside than here at home.”

And while in the talks themselves the government has never threatened to pull out, it has made such statements to the media in the past.

In October 2012 the talks were officially launched in Oslo, two years after Santos was sworn in, with Cuba and Norway as guarantors and Chile and Venezuela as facilitators. Since then the meetings have been held in Havana, where the 38th round of talks is now taking place.

Under the principle that “nothing is agreed until everything is agreed,” preliminary accords have been reached on three of the six main points on the agenda, in 32 months of talks.

These three points involve a wide range of aspects related to land reform; political participation; and the substitution of drug crops.

The pending items involve the right of victims on both sides to truth, justice and reparations; disarmament; and mechanisms for the implementation of an eventual peace deal.

The negotiations are taking place as the decades-long conflict drags on, and it looks like a clause stipulating that nothing that happens on the battlefield can affect the talks has fallen by the wayside.

The intensification of hostilities is costing lives and causing environmental disasters, and support for a continued military offensive, rather than a negotiated peace, is growing again.

But the same thing happened 15 years ago, as indicated by Gallup poll results.

To the question “what do you believe is the best way to solve the problem of the guerrillas in Colombia?” the response in June 2015 was a tie between those who selected the option “continue the talks until reaching a peace agreement” and those who chose “no talks; try to defeat them militarily.”

Since 2001, a majority of respondents have consistently supported peace talks over a military solution, with the exception of the December 2001- July 2003 period.

But since December 2001, respondents have said they do not believe the insurgents could ever seize power by force.

Looking at Gallup polls over the past 15 years, it is clear that De la Calle’s assertion that “people are more skeptical than ever” regarding the peace talks is not true. The results indicate that, no matter what happens, the sense of “desperation” that the chief negotiator mentioned, and that his interviewer emphasised, fluctuates.

“We have to be honest enough to tell Colombians that the peace process is at its lowest ebb since the talks began,” De la Calle said.

But why is that happening? It’s the question of justice, he said. “It is the touchiest part of the negotiations. The FARC have to assume responsibility for their actions. The state does too, of course.”

De la Calle said the Colombian government would only agree to a ceasefire if the top FARC leaders spent some time in prison for crimes against humanity – although the negotiator said they would be held “in decent conditions, without bars or striped uniforms.”

He also acknowledged that the FARC “have said they are willing to accept a system of justice that would include these components.”

If that is true, it’s not clear where exactly the problem lies.

In February, the attorney general’s office revealed that it planned to investigate over 14,000 businessmen, ranchers, politicians and members of the security forces with alleged ties to the partially dismantled far-right paramilitaries.

Almost simultaneously, former president César Gaviria (1990-1994) proposed for these non-combatants “a pardon in exchange for their recognition of the crimes committed, an apology, and a willingness to provide reparations for the victims.”

Segments of the business community and some political factions welcomed or expressed an openness to discussing the proposal, others rejected it, and others were concerned or upset.

In any case, the ever vulnerable climate surrounding the peace talks became even more tense.

Not long afterwards, the negotiators in Havana announced a preliminary agreement regarding an issue that is especially thorny for those who not only enjoy impunity but have also been active behind the scenes, anonymously: a non-prosecutorial truth commission.

Above and beyond the discussion on justice and punishment, De la Calle says the main obstacle now faced in the peace talks is the question of a bilateral ceasefire – “the FARC’s top priority,” in his view. The insurgents would also have to stop raising funds through practices like extortion and involvement in the drug trade, he added.

A bilateral ceasefire when “there are other sources of violence, besides the FARC,” as De la Calle rightly points out?

The much smaller National Liberation Army (ELN) would appear to be awaiting the results of the peace talks with the FARC before launching its own negotiations, while remaining active.

Then there are the ultra-right-wing paramilitary groups that either did not take part in the 2003-2006 partial demobilisation or regrouped as what the government calls “Bacrim” – for “bandas criminales” or “criminal bands”.

“We can’t tell the security forces to stay quiet,” De la Calle said. “If they want a ceasefire, the government is willing to do that, but ‘concentration zones’ would be essential.”

In these “rural concentration zones” first demanded by Álvaro Uribe during his presidency (2002-2010), “convicted guerrillas would be held for a time, without requiring that they turn in their weapons,” De la Calle explained.

IPS postponed publication of this article in an unsuccessful attempt to obtain a response by email from FARC chief negotiator Iván Márquez to several of De la Calle’s statements.