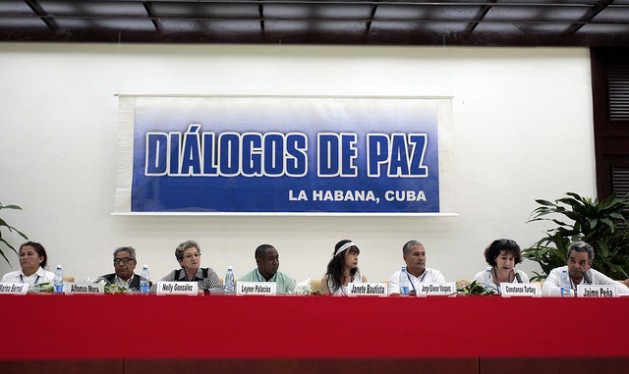 The first delegation of victims of Colombia’s armed conflict offer a press conference after their talks with the government and FARC negotiators on Aug. 16 in Havana, Cuba. Credit: Jorge Luis Baños/IPS

BOGOTA, Aug 25 2014 (IPS) - Three major advances were made over the last week in the peace talks that have been moving forward in Cuba for nearly two years between the Colombian government and the FARC guerrillas, while the decades-old civil war rages on.

On Saturday Aug. 16, a group of relatives of victims of both sides met face-to-face in the Cuban capital. It was the first time in the world that victims have sat down at the same table with representatives of their victimisers in negotiations to put an end to a civil war.

And on Thursday Aug. 21 an academic commission was set up to study the roots of the conflict and the factors that have stood in the way of bringing it to an end.

That day, the unthinkable happened.

High-level army, air force, navy and police officers flew to Cuba, under the command of General Javier Alberto Flórez, the chairman of the Joint Chiefs of Staff.

In the 24-hour technical mission they met with their archenemies, the FARC (Revolutionary Armed Forces of Colombia, which emerged in 1964) to discuss “how to implement a definitive bilateral ceasefire, and how the FARC would disband and lay down their arms,” said President Juan Manuel Santos.

Santos described the participation of active officers in the talks, as part of a subcommission installed on Friday Aug. 22, as “a historic step forward.”

Twelve victims, of the 60 who will travel to Havana in five groups, met for nearly seven hours on Aug. 16 with the FARC and government negotiators, who included two retired generals, one of whom was Jorge Enrique Mora Rangel, an army officer accused of human rights abuses.

At one extreme, former rightwing President Álvaro Uribe (2002-2010) proposes the creation of a higher court to review the sentences handed down against members of the security forces from 1980 to 2026, and to release them while the sentences are revised. At the other extreme, the FARC do not recognise Colombia’s legal system as having the authority to try the guerrillas, once a peace agreement is reached.

The group of 12 was made up of six relatives of victims of crimes of state and of the far-right paramilitaries (which partially demobilised in the last decade), four victims of the FARC, and two victims of two or three different armed actors.

It was “a unique experiment that has not been seen anywhere else,” according to Fabrizio Hochschild, representative of the United Nations in Colombia.

In previous forums in Colombia, thousands of family members of victims have expressed their main demands: the truth about what happened to their loved ones, improvements in the mechanisms for reparations, guarantees that what happened will not be repeated, and justice.

The negotiators gave the task of selecting the groups of victims’ relatives to the U.N., Colombia’s National University, and the Catholic bishops’ conference. They were chosen from an official universe of 6.7 million victims and survivors, including 5.7 million victims of forced displacement, most of whom are small-scale farmers.

The creation of a Historical Commission on the Conflict and Victims (CHCV), at the behest of the negotiating table, was announced Thursday Aug. 21.

The commission consists of six academics and one rapporteur named by each side, for a total of 14 historians, sociologists, anthropologists, economist and political scientists.

The CHCV will analyse the origins of the armed conflict, the aspects that have stood in the way of a solution, and the question of who is responsible for its impacts on the population.

The rapporteurs will produce a joint report, by late December, although they will not “attribute individual responsibilities” and the report “must not be written with the aim of achieving specific legal effects,” the negotiating table stipulated.

This is not a truth commission, which should emerge once a peace agreement is signed. But it is a firm step in that direction.

Meanwhile, the aspect that appears to be foremost in the mind of public opinion in Colombia is neither the question of truth nor how to guarantee that the atrocities won’t happen again; it is the question of justice.

At one extreme, former rightwing President Álvaro Uribe (2002-2010) proposes the creation of a higher court to review the sentences handed down against members of the security forces from 1980 to 2026, and to release them while the sentences are revised.

At the other extreme, the FARC do not recognise Colombia’s legal system as having the authority to try the guerrillas, once a peace agreement is reached.

That position is based on a certain logic: if the guerrilla group is part of the negotiations, along with the state, and both have committed crimes, the state “cannot be both judge and jury,” the FARC negotiator, a commander whose nom de guerre is Pablo Catatumbo, told IPS in Havana.

At the same time, the families of victims of forced disappearance do not accept impunity.

The victims’ families asked the negotiators on both sides not to get up from the table until an agreement is reached.

There are still 28 pending aspects in the three points that have been agreed, of the six points on the agenda for the talks. It will be difficult to reach a consensus on these unresolved aspects, which are marked in red: 14 sub-points in the area of agriculture, 10 in political participation and four in the area of illegal drugs.

The CHVC is to make recommendations for reaching agreement on these sub-points.
Besides its interest in the question of justice, the public wants the FARC to demobilise and lay down their arms.

General Mora Rangel said in June “they must demobilise and hand over their weapons…they have to do so to join society and Colombia’s democratic system.”

But according to peace analyst Carlos Velandia, there will be no demobilisation, no laying down of arms, and no reinsertion.

There will be no photo ops of a “mass demobilisation”, like the ceremonies held in the mid-2000s showing the paramilitaries handing in their weapons, he said. Instead armed structures will be transformed into political structures, although the mechanism has not been worked out yet, he added.

And unlike in the case of the paramilitaries, “there won’t be thousands of insurgents stretching out their hands for ‘Papá State’ to help them,” he said.

Despite the obstacles, “the problem doesn’t lie over there, where both sides are taking a proactive stance,” a Catholic priest who is well-informed on what is going on in the talks in Havana told IPS.

The problem lies in Colombia, he said, where Uribe – now an extreme-right senator and a leader of the opposition in the legislature – had an enormous influence on public opinion during his two terms as president.

Uribe is “working on” businesspersons, bankers, large-scale merchants, and some journalists, to win them over in his fierce campaign against the peace talks, the priest said.

“Santos isn’t a leader, he’s a follower. If the country turns against him, he’ll abandon the peace process,” he maintained.

If there is strong public support for an eventual peace deal, the powerful oligarchy’s pressure on Santos could convince him to block a referendum on the peace agreement.
But if Uribe and victimisers who do not want to be more openly identified by the victims manage to foment rejection of the peace talks among voters, they would not object to a referendum on an eventual peace accord.

A precedent for this was set in Guatemala, where turnout for a referendum on a peace deal that put an end to 36 years of civil war – 1960-1996 – was extremely low, and among the few voters who did show up, a majority rejected the peace agreement.

In Colombia’s peace talks in Havana, the mechanism of a popular referendum is the sixth point on the agenda, which is still pending, and Santos has not referred to it in public.

To block these maneuvers, “there have to be more and more decisions aimed at recognising the legitimacy of the talks, including acts of truth and forgiveness. That will make it more likely, although not more sure, that the peace process will move forward successfully,” because “the more people who can forgive, the closer we are to seeing peace win out,” the priest said.

Different sectors of society agree on the need for “a new social pact” to approve the accords and work out the pending aspects marked in red. For the FARC and many others, on the left or the far right, these pacts should be reached through a constituent assembly that would rewrite the constitution. But Santos would appear to be leaning towards a referendum instead.