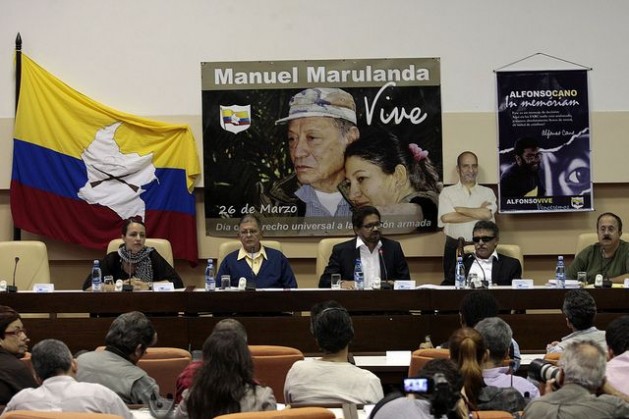 BOGOTA, Aug 23 2013 (IPS) - Colombia’s FARC guerrillas announced Friday a “pause” in the peace talks in Havana, which formally opened a year ago. But analysts say it is only a temporary glitch.

Colombian President Juan Manuel Santos unexpectedly announced Thursday that he had introduced a fast-track bill in Congress to hold a referendum in which voters would approve or reject any peace agreement reached with the FARC (Revolutionary Armed Forces of Colombia).

The president said it would be best for the referendum to coincide with the March 2014 legislative elections, although he left open the possibility of it being held in May 2014 instead, during the presidential elections, when he is expected to run for re-election.

Colombia’s laws do not allow referendums to be held simultaneously with elections. The reform presented by Santos would make that possible.

That would formally set a deadline for the peace talks, even though the agreement to negotiate, published in September 2012, did not contemplate any time limits.

A clause in that agreement states that neither of the two sides will leave the negotiating table until a final accord has been reached. Norway and Cuba are guarantors of the peace talks, and Venezuela and Chile are observers.

Prior to the current crisis, sources knowledgeable about the negotiations said a final peace agreement could be ready in the first few months of 2014.

The sixth point in the document published in September 2012 includes the discussion of a referendum or another mechanism for approval of the final peace deal. But that question has only been addressed informally in Havana.

According to official reports, agreement has only been reached on the first point on the agenda – integral agrarian development – in the talks so far, although there are still key details to be worked out on that question.

The negotiators are reportedly discussing the second point, regarding rights and guarantees for the opposition, access to the media, and mechanisms of citizen participation, including guarantees of safety and equal conditions for vulnerable segments of the population.

Conflict and peace analyst Carlos Velandia said the talks in Havana “are much more advanced than what they have told us.”

He said progress has been made on several aspects of the agenda, although it is not clear which ones.

Historian Carlos Medina Gallego tweeted that “Conflict occurs in peace talks when one side takes decisions outside of what was agreed and seeks to impose its will on the other.”

The “pause” introduced by the FARC apparently indicates that there is no agreement on the mechanism for voters to approve an eventual peace accord.

The rebel group wants a constituent assembly to be elected, to rewrite the constitution.

But serious problems with the electoral system that have been denounced, such as vote-buying, raise fears that politicians with funds from drug trafficking and corruption would win a majority of seats on the assembly.

Nor is any parallel reform planned in the legislature, where the conservative president’s supporters hold a broad majority of seats, to resolve issues like low voter turnout or barriers that make it virtually impossible for voters in remote communities to participate in elections.

The communist FARC was founded in 1964, as was the second-largest insurgent group, the pro-Fidel Castro National Liberation Army (ELN), which was influenced by liberation theology, a current in the Roman Catholic Church which finds in the teachings of Jesus Christ a call to free people from unjust economic, political, or social conditions.

Discreet exploratory talks with the ELN have taken place since Santos took office in August 2010, but with ups and downs that led to a breakdown.

However, this week there were signals that the exploratory talks may resume.

According to Velandia, a former ELN leader who spent time in prison for his involvement in the guerrilla group, said the “pause” in the talks between the FARC and the government “is a temporary situation.”

“The FARC will certainly not leave the negotiating table,” he told IPS. “But the government’s actions have done a great deal of damage to the talks and could slow down the process.”

José Jairo González, an analyst with the Centro de Estudios Regionales del Sur, a local think tank, told IPS that “I don’t think it is the government’s intention to try to impose the referendum at any price.

“This is a reasonable pause to look at the limits and reach of the referendum and the prior conditions for participation in the (legislative) elections in March or the presidential elections,” said the analyst, who studies Colombia’s nearly half-century armed conflict.

González added that the referendum could not be held under the current electoral system, “which is being questioned; that’s what the FARC is saying.”

The referendum would have to be decided on by the new legislature elected in March.

In any case, it is not clear in Santos’ bill when a special constituency would be created to allow FARC representatives to run for Congress.

The FARC’s “pause” coincides with a national strike launched Monday Aug. 19 by coffee, cacao, potato and rice farmers, cargo truckers, gold miners and health workers, who have blocked key roads. There have been violent clashes between strikers and the riot police.

Late Venezuelan President Hugo Chávez played a decisive role in bringing about the exploratory talks with the FARC, which apparently began in early 2011.