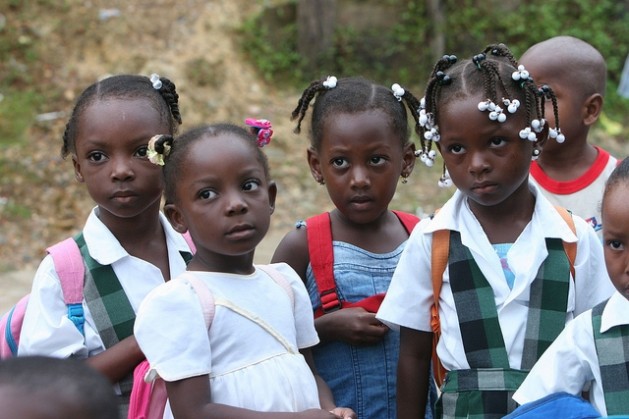 Schoolchildren in Quibdó, the capital of Chocó, a province where displacement is on the rise. Credit: Jesús Abad Colorado/IPS

BOGOTA, Jun 4 2013 (IPS) - Drugs and arms traffickers are muscling in on Colombia’s Pacific coastal region, forcibly displacing local people, according to a new report by the Consultancy for Human Rights and Displacement (CODHES).

One of the factors forcing people to leave their homes is “disputes and strategies to consolidate control over territories by the armed actors,” said Marco Romero, the head of CODHES, at the launch of the report titled “La crisis humanitaria en Colombia persiste: El Pacífico en disputa” (Colombia’s humanitarian crisis continues: The disputed Pacific region) on May 31.

Displacement in the region “is a consequence of its geographical location, as well as neglect by the state, which has benefited the drug trade. In addition the government policy known as ‘locomotora minera’ (‘drive for mining,’ a policy to foment large-scale mining) has increased production since 2009, and with it, the ambition of the armed factions,” Romero said.

Colombia’s internal armed conflict has dragged on since the early 1960s. Now the government of conservative President Juan Manuel Santos and the Revolutionary Armed Forces of Colombia (FARC) are holding peace talks in Havana. But there are a number of other armed groups in this country, including drug trafficking syndicates and far-right paramilitary militias.

The report by CODHES, which is the most respected non-governmental source of statistics on displacement, says that last year 92,596 people were forced to flee their homes in the country’s Pacific region – 36 percent of the 2012 victims of forced displacement nationwide.

“Mass displacement is the term used when a single episode of violence forces the migration of at least 10 families or 50 people,” CODHES researcher Paola Hurtado told IPS.

In the Pacific region, mass displacements have increased by 45 percent over the last two years.

Afro-Colombian and indigenous people, who live mainly in the western Pacific coastal departments (provinces) of Nariño, Cauca, Valle del Cauca and Chocó, are the most affected. In 2012, an estimated total of 51,938 blacks and 18,154 native people in this region were victims of forced displacement.

“The situation of Afro-descendant people is terrible,” Ariel Palacios, of the National Conference of Afro-Colombian Organisations (CNOA), said at the presentation of the report.

“Government protection policies are ineffective, and racism is rife in the cities. That’s why most Afro-Colombians try to relocate in small towns or villages, to mitigate the gravity of their situation,” Palacios said.

A newer aspect is intra-urban displacement, within or between cities, to which CODHES devotes part of its report, attributing it to disputes between criminal bands for control of small-scale drug dealing.

Romero said, “Paradoxical as it may seem, in the midst of conflict and the humanitarian crisis, the country is seeking peaceful solutions and reparations for the victims, with Law 1,448 and the peace talks between the national government and the FARC.”

He was referring to the Victims and Land Restitution Law, which began to be enforced in 2012 in response to the main injustice arising from the war, the other side of the coin of displacement: illegal appropriation of land.

The law “is a positive development because it accords recognition to victims and acknowledges that, if the state was not capable of protecting them in the past, it must do so now,” Gabriel Rojas, CODHES’s research coordinator, told IPS.

“It’s also positive that economic resources have been assigned,” amounting to some 30 million dollars, he said.

“However, we know, and the outgoing agriculture minister (Juan Camilo Restrepo) has admitted, that there are serious problems with organisational aspects and registration, which have caused difficulties and in some cases re-victimised people, who suffer anxiety knowing there is a law to protect them and yet, a year and a half later, implementation lags far behind,” Rojas said.

Colombia has one of the largest populations of internally displaced people in the world. Civil society organisations and official estimates put the number of displaced since the 1980s at over five million people in this country of approximately 46 million people.

The situation reached such a pass that in 1998 the Office of the United Nations High Commissioner for Refugees (UNHCR) opened a permanent office in Bogotá.

IPS requested comments and statistical information from the government’s Unit for Care and Comprehensive Reparations for Victims, and was promised a reply, “which would not be immediate,” on condition the request was sent by e-mail.

“The lack of official statistics is becoming a problem. The last known figure for the total of Afro-Colombian people affected by forced displacement in 2012 was about 90,000, but there is no certainty,” Rojas said.