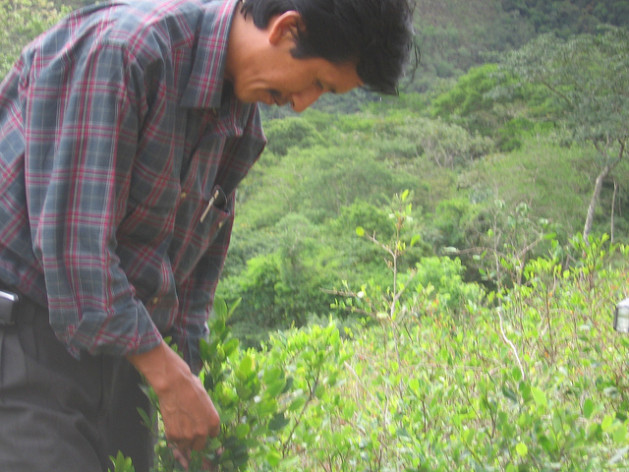 WASHINGTON, Dec 4 2013 (IPS) - Despite looming differences over Colombia’s drug policy, President Barack Obama renewed his support for a peaceful settlement to the civil war that has plagued the country for over half a century in a meeting with Colombian President Juan Manuel Santos Tuesday.

The White House visit came as the Colombian government is engaged in the third stage of negotiations with the Revolutionary Armed Forces of Colombia (FARC), the country’s largest guerrilla organisation. Analysts say it will be a difficult one, particularly because of how the U.S. might react to some of its components.

“The end of fumigation is one of the principal demands of the FARC, and the Santos government has shown greater openness to discussing alternatives to the practice." -- Cynthia J. Arnson

“Many officials in the Obama administration … including Obama himself, have had very positive and supporting things to say about the peace process, and I think that at a political level there has been unequivocal support,” Cynthia J. Arnson, the director of the Latin American Programme at the Wilson Center, a think tank here, told IPS.

“But this round is going to focus on counter-narcotics and drugs, and the Santos government has been one of the governments at the forefront in the region calling for a rethinking of the way counter-narcotics policy is conceived of and implemented,” she said.

Arnson was referring to Santos’ openness to discussing alternatives with the FARC that would not be particularly popular with Washington, which has long funded aerial fumigation of coca crops – the widespread spraying of tens of thousands of coca hectares.

“The end of fumigation is one of the principal demands of the FARC, and the Santos government has shown greater openness to discussing alternatives to the practice,” she said.

At the same time, other analysts, while recognising the delicacy of the issue and the disagreements of some members of the U.S. government over alternative options, believe that in the end, the Obama administration will support any settlement that will enhance the chances of a peaceful solution.

“There are certain sectors within the U.S. government that will not be happy with some of the options that Santos is considering, but I think that most of the weight of the government will back him,” Michael Shifter, the president of the Inter-American Dialogue, a leading think tank on Western Hemisphere affairs here, told IPS.

“If that [considering alternative options] is what needs to be done, Obama and the State Department will do whatever Santos needs to achieve an agreement.”

With regard to his recent openings to the FARC and how they might be perceived from the outside, the Colombian president told reporters Tuesday that, although “some people say we’re giving in to FARC, this is nonsense, absolute nonsense. I decided to open a peace process with them because every war must end with some kind of negotiation. I am very conscious that we will have enemies, but I am also conscious that this is the correct step.”

In a break with tradition, Santos’ predecessor, Alvaro Uribe has strongly and repeatedly criticised Santos for negotiating with the FARC and another guerrilla group, the ELN (National Liberation Army), from his current perch at the Bipartisan Policy Center, a Washington-based think tank.

His denunciations have themselves drawn criticism here, particularly from Democrats who note that Santos was hand-picked by Uribe as his defence minister and that the former president himself often displayed great leniency toward right-wing paramilitary groups accused of human-rights atrocities.

The two heads of state also discussed progress on the U.S.-Colombia Trade Promotion Agreement, a bilateral agreement that came into effect in May 2012 with the goal of strengthening commercial ties and creating jobs in both countries.

At the core of the agreement is the Labor Action Plan. Announced on Apr. 7, 2011, the Plan contains a series of provisions aimed at protecting Colombian workers, an issue the U.S. government had particularly emphasised as a precondition to signing the trade deal.

On Tuesday, the White House noted progress on the Plan and acknowledged its continued commitment to its implementation. According to critics, however, the Plan hasn’t shown any results yet.

“Any claim that there’s been progress is not correct,” Gimena Sanchez, a senior associate at the Washington Office on Latin America, a human rights watchdog here, told IPS.

“Colombia has made advances only on paper and they are not based on real results,” she noted, urging the U.S. government to seek a more active role in ensuring the Plan’s implementation on the ground.

“The U.S. needs to find ways to go there, and move beyond just looking at the veneer of what Colombia is representing,” she said.

Colombian officials, however, argue that the country is moving forward. “What we care about the most today is everything that is related to equality and reducing poverty,” Juan Carlos Pinzon Bueno, Colombia’s minister of national defence, said at a gathering at the Brookings Institution here Monday.

To that end, he noted that the government has managed to reduce the country’s double-digit unemployment to about nine percent, an achievement he labeled as a “substantial improvement.”

The 17th round of peace talks, representing the third step in the negotiation process, began Nov. 28 in Havana, Cuba behind closed doors. Only a few days before the round’s beginning, Santos announced his intention to run for re-election in next May’s presidential elections.

An eventual victory would provide him with four more years to continue peace negotiations with the FARC.